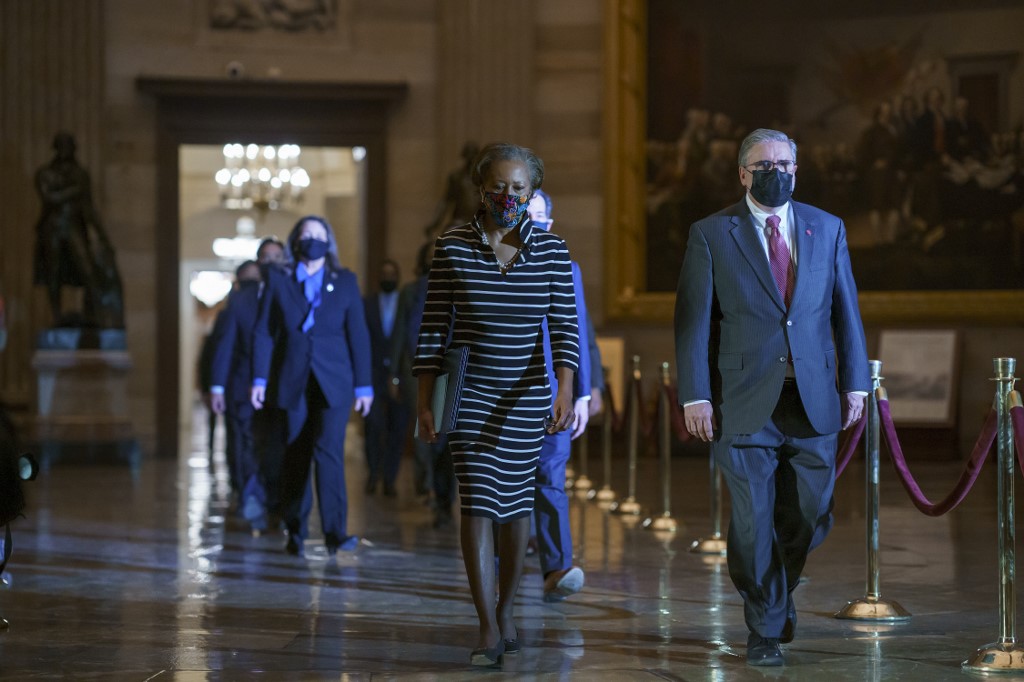 Clerk of the House Cheryl Johnson along with acting House Sergeant-at-Arms Tim Blodgett lead the Democratic House impeachment managers as they walk through Statuary Hall on Capitol Hill to deliver to the Senate the article of impeachment alleging incitement of insurrection against former President Donald Trump, in Washington, DC January 25, 2021. (Photo: AFP)

Nine House Democrats, appointed by House Speaker Nancy Pelosi as impeachment managers who will serve as prosecutors in the upcoming trial, made the ceremonial walk through the Capitol building to the upper chamber to deliver the article.

"President Trump gravely endangered the security of the United States and its institutions of Government. He threatened the integrity of the democratic system, interfered with the peaceful transition of power, and imperiled a coequal branch of Government. He thereby betrayed his trust as President, to the manifest injury of the people of the United States," Jamie Raskin, the lead impeachment manager, read aloud the single article of impeachment against Trump on the Senate floor.

All 100 U.S. senators will be sworn in as jurors on Tuesday, and a summons will be formally issued to Trump for his response, which will be due on Feb. 2, local media reported.

The trail is set to begin the week of Feb. 8.

"Everyone wants to put this awful chapter in American history behind us. But sweeping it under the rug will not bring healing," Senate Majority Leader Chuck Schumer said on Sunday. "I believe it will be a fair trial. But it will move relatively quickly and not take up too much time because we have so much else to do."

The Democrats-controlled House voted to impeach Trump over "incitement of insurrection" in a 232-197 vote on Jan. 13, making him the first president to be impeached twice.

At least 17 Republicans would need to join all 50 Democrats to convict Trump by a two-thirds majority.