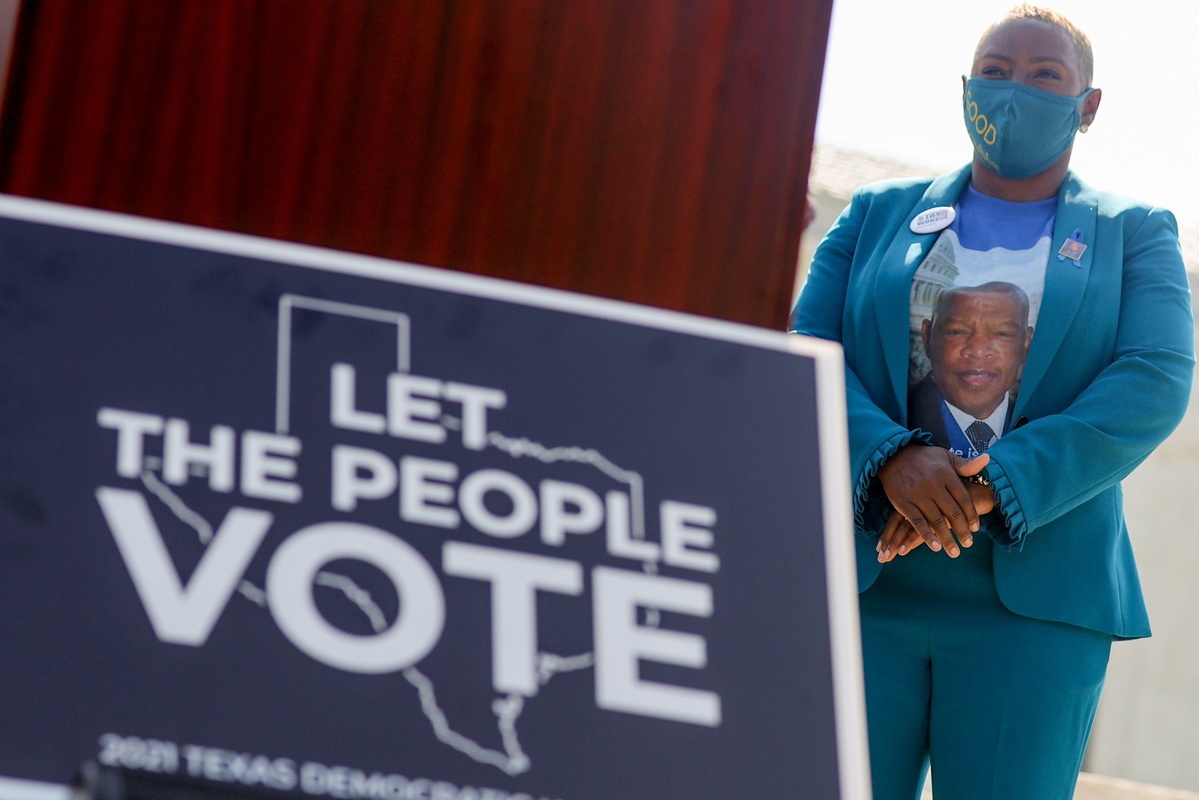 Angela Lewis Warren, niece of late US Representative John Lewis (D-GA), participates in a news conference held by the Transformative Justice Coalition to urge Congress to pass voting rights legislation when they return from their summer recess, in front of the US Supreme Court building in Washington, Aug 11, 2021. (Photo: Agencies)

US House Democrats on Tuesday unveiled a long-awaited piece of legislation named after late civil rights icon John Lewis that would strengthen federal oversight over elections by making it easier to block state election rules deemed discriminatory to minority voters.

Democrats, who now control the House by a slim margin, expect to pass the John Lewis Voting Rights Advancement Act during a rare August session next week, touting that the legislation would reinstate the oversight power of the Voting Rights Act of 1965, which had been cut down in recent years by a series of adverse Supreme Court rulings.

The introduction of the bill also came amid Democrats' fight to counter a slew of restrictive election laws enacted in Republican-led states.

"Today, old battles have become new again as we face the most pernicious assault on the right to vote in generations," said Representative Terri Sewell, the bill's chief author and a Democrat of Alabama, where late Democratic Congressman Lewis and others staged a voting rights campaign in the 1960s that spread across the nation. "It's clear: federal oversight is urgently needed," Sewell said.

One of the provisions originally contained in the 1965 law that the new bill seeks to restore requires states and localities with a history of discriminatory voting rules to get approval from the Justice Department before implementing any change to voting procedure.

That requirement was ruled unconstitutional in a Supreme Court decision dating back to 2013, when the justices said the formula used to determine which states were subject to federal clearance was outdated.

The new bill also attempts to strengthen Section 2 of the Voting Rights Act, which was strengthened by Congress in the 1980s to prohibit states or other jurisdictions from implementing voting laws that discriminate against Americans based on their race, color of skin or identification with a language-minority group.

Voting rights activists and Democrats said a Supreme Court ruling in July that upheld a pair of voting rights restrictions by the state of Arizona weakened Section 2, effectively making it more difficult to challenge state voting laws as discriminatory in court using a different provision of the law.

The new bill, however, has a narrow chance to pass the evenly divided Senate, where only one Republican, Senator Lisa Murkowski of Alaska, appears to be a potential supporter of the legislation.

That means that unless the 50 Democratic senators stand in unison to seek changes to the filibuster -- which requires 60 votes for most legislation to be approved -- the path for the bill to clear the upper chamber remains nonexistent.