The House expects to receive the first files of underlying evidence from Robert Mueller's report soon, after a sudden shift by the Justice Department as Democrats weigh impeachment proceedings against President Donald Trump. 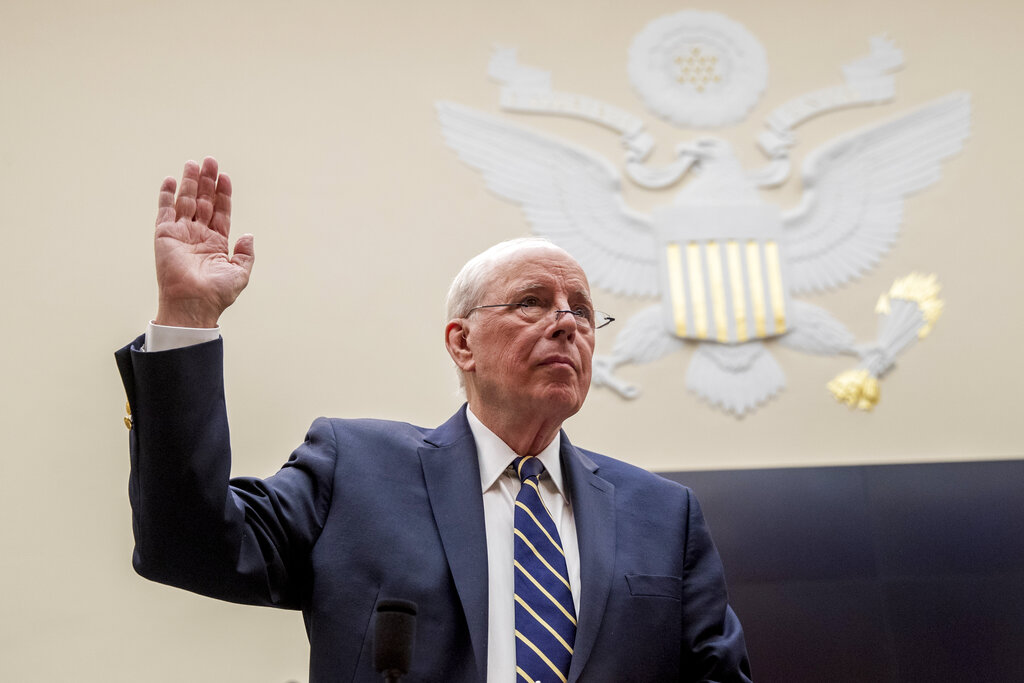 Former White House counsel for the Nixon administration John Dean is sworn in before a House Judiciary Committee hearing on the Mueller Report on Capitol Hill in Washington, Monday, June 10, 2019. (Photo: AP)

It's unclear if the deal, announced just moments before the start of a Judiciary Committee hearing with Watergate star witness John Dean, will ultimately be enough for Democrats who have called for the full, unredacted report and underlying documentation from the special counsel's work. But it signaled the first real breakthrough in the standoff over the report and came at the start of a week of ramped-up action by the House in the Trump-Russia probe.

Rep. Jerrold Nadler, D-N.Y., the chairman of the committee, said the Justice Department will provide some of Mueller's "most important files" and all members of the committee will be able to view them. He said the files will include those used to assess whether Trump obstructed justice.

In response to the agreement, Nadler said the panel will not vote to hold Attorney General William Barr in criminal contempt, for now. But the House will still vote on a resolution Tuesday that would empower the committee to file a civil lawsuit for the materials, if Democrats decide to do so.

That was the expected outcome even before the deal, as Democrats have shifted their strategy toward lawsuits and away from criminal contempt. Criminal contempt would be referred to the Justice Department, where it would certainly be rejected. And Democrats have been encouraged by some early wins in court as Trump has broadly fought congressional oversight.

Nadler said in his statement that he would give the Justice Department some time to comply.

"If the Department proceeds in good faith and we are able to obtain everything that we need, then there will be no need to take further steps," Nadler said in a statement. "If important information is held back, then we will have no choice but to enforce our subpoena in court and consider other remedies."

The sudden turn of events came ahead of a pivotal week for House Democrats, who are torn over whether to move forward with impeachment proceedings and searching for ways to focus public attention on Trump's actions.

Dean, a White House counsel under Richard Nixon who helped bring down his presidency, testified Monday that Mueller has provided Congress with a "road map" for investigating Trump.

He said he saw parallels between Mueller's findings regarding Trump and those of congressional investigators looking into Nixon's administration decades ago. He pointed to the way the presidents used their pardon power in an attempt to influence witness testimony, and their efforts to seize control of the investigation and direct the efforts of prosecutors.

Trump, apparently watching the televised hearing, tweeted, "Can't believe they are bringing in John Dean, the disgraced Nixon White House Counsel." He added his oft-repeated claim, "No Collusion - No Obstruction!"

At times, Dean, who said he last appeared before Congress in 1974, was forced to fend off attacks from committee Republicans.

The top Republican on the committee, Rep. Doug Collins of Georgia, dismissed Dean as a "godfather" figure. Rep. Jim Jordan, R-Ohio, criticized Dean's work and noted he pleaded guilty after Watergate. And Rep. Matt Gaetz of Florida, a Trump ally, derided his appearance as a Capitol Hill version of "That '70s Show."

In addition to Dean, two former US attorneys who served during the Obama administration, Barbara McQuade and Joyce Vance, also testified before the committee. Both have become regulars on cable news shows, analyzing developments in the Mueller investigation and offering criticism on Twitter of the president's conduct.

The Justice Department said it was pleased the House committee had "agreed to set aside its contempt resolution and is returning to the traditional accommodation process." The department "remains committed to appropriately accommodating Congress's legitimate interests related to the Special Counsel's Investigation and will continue to do so provided the previously voted-upon resolution does not advance," spokesperson Kerri Kupec said in a statement.

And at the same time, the Justice Department announced it was stepping up its counter-probe into the origins of the Russia investigations, a priority for Trump and his Republican allies on Capitol Hill.

The department said Monday it has asked intelligence agencies to preserve all relevant records and access to witnesses. Republican lawmakers are eager to dig into those documents and determine why Trump's campaign was under scrutiny.

Democrats and Republicans are vying to win over public opinion in the fallout from Mueller's probe.

While the special counsel concluded there was not sufficient evidence that the Trump campaign conspired with Russia to swing the 2016 election, Mueller also said he could not exonerate the president of obstruction of justice in the investigation.

The procession of hearings and votes in the week ahead is partly designed to mollify anxious Democrats who have pushed House Speaker Pelosi to begin impeachment proceedings immediately. A growing number of Democrats say the House should start impeachment proceedings in part because Trump is obstructing justice now by refusing to comply with congressional subpoenas for documents and testimony. Pelosi, D-Calif., prefers to continue the investigations.

On Tuesday, the House has scheduled the vote to authorize lawsuits against Barr and former White House counsel Donald McGahn for failing to comply with subpoenas from the Democratic-controlled House. The vote will put the full House on record approving the lawsuits, if leaders and committees decide they want to move forward with them.

On Wednesday, the House Intelligence Committee intends to review the counterintelligence implications of the Russian meddling.

During a meeting with Nadler and other committee heads last week, Pelosi made the case that she would rather see Trump voted out of office and "in prison" than merely impeached, according to a report in Politico. A person familiar with the exchange confirmed the account to The Associated Press.