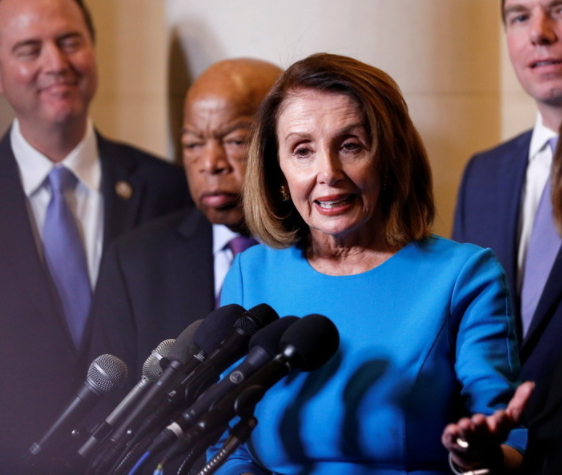 House Minority Leader Nancy Pelosi (D-CA) speaks during a break in a House Democratic Caucus meeting where she was nominated to be Speaker of the House for the 116th Congress on Capitol Hill in Washington, U.S., November 28, 2018. (Photo: Xinhua/REUTERS)

Pelosi, 78, ran unopposed as the nominee for speaker in a closed-door Democratic caucus election despite an entrenched rebellion against her.

"I'm proud to be the nominee of the House Democratic caucus once again for speaker of the House," she told reporters.

Out of 239 votes cast, 203 Democratic members voted in favor of Pelosi being the speaker, with 32 voting against. Three votes were blank and one member was absent.

The California Democrat needs 218 votes, the majority of the full House, to be elected speaker. The vote will occur on the House floor Jan. 3, the first day of the incoming Congress.

House Democrats have at least 233-vote majority in the new Congress, but some Democratic lawmakers have pledged that they won't back Pelosi for speaker.

Pelosi predicted the opposition will not stymie her speakership, saying that she expects to "have a powerful vote as we go forward."

A master legislator and political strategist, Pelosi was the first woman to be House speaker and held the position from 2007 to 2011 after Democrats took control of the lower chamber in the 2006 midterm elections.

Pelosi also played a key role in the 2018 midterm elections by helping raise millions of dollars for Democratic fellows and keep them focus on the issue of health care on their campaign trails.

Democrats seized control of the House for the first time in eight years in the elections held earlier this month, while Republicans expanded their majority in the Senate, leading to a split Congress.

Should Pelosi become House speaker, she would be second in line to the U.S. president, after Vice President Mike Pence.

In addition to selecting their nominee for speaker, Democrats on Wednesday chose their majority leader, majority whip and several other leadership positions.

Representative Steny Hoyer of Maryland is set to become majority leader, the No. 2 figure among House Democrats. Representative Jim Clyburn of South Carolina will become the whip, the third-ranking Democrat. They both ran unopposed.