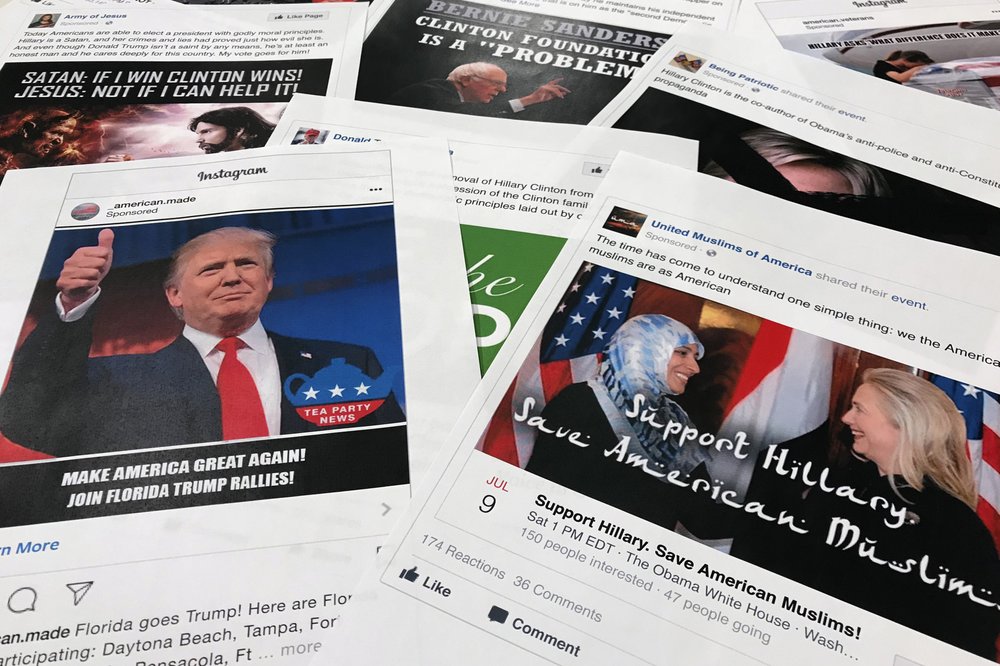 In this Nov. 1, 2017, file photo, Some of the Facebook and Instagram ads linked to a Russian effort to disrupt the American political process and stir up tensions around divisive social issues, released by members of the US House Intelligence committee, are photographed in Washington. (Photo: AP)

The House approved legislation Wednesday to better protect the country’s elections from foreign interference, the third major bill the Democratic-controlled chamber has passed this year addressing problems that arose in the 2016 presidential election.

The 227-181 vote comes as lawmakers pursue an impeachment inquiry centered on allegations that President Donald Trump improperly solicited election help from Ukraine ahead of the 2020 vote. It also comes months after special counsel Robert Mueller finished his report on 2016 election interference, finding numerous contacts between the Trump campaign and Russia but not enough evidence to establish a conspiracy between the two. Democrats want to prevent such actions in the future and ensure that campaigns know they are illegal.

The Stopping Harmful Interference in Elections for a Lasting Democracy, or SHIELD Act, would require that candidates and political committees notify the FBI and other authorities if a foreign power offers campaign help. It also tightens restrictions on campaign spending by foreign nationals and requires more transparency in political ads on social media platforms such as Facebook and Twitter.

And it would explicitly prohibit campaigns from exchanging campaign-related information with foreign governments and their agents. The latter provision was aimed at reports that officials in Trump’s 2016 campaign shared polling data with a person associated with Russian intelligence.

Rep. Zoe Lofgren, D-Calif., the bill’s chief sponsor, said it would close loopholes that allow dishonest behavior, increase disclosure and transparency requirements, and ensure that anyone who engages with foreign actors to influence the outcome of an election will be held accountable by law.

“Most Americans know that foreign governments have no business interfering in our elections,” said Lofgren, who chairs the House Administration Committee. “We should all be able to agree that we need to protect our democracy — and with a sense of urgency. This is not a partisan opinion. Nothing less than our national security is at stake.”

But Illinois Rep. Rodney Davis, the top Republican on the Administration panel, called the bill a thinly disguised bid by Democrats to prop up impeachment. “That’s why we’re here today: not to make real, legislative progress on preventing foreign interference in our elections, but to push partisan politics for the Democratic agenda,” he said.

The White House threatened to veto the bill if it reaches the president’s desk, saying it was redundant, overly broad and unenforceable. The bill’s “expansive definitions seem designed to instill a persistent fear among Americans engaged in political activity that any interactions they may have with a foreign national could put them in legal jeopardy,” the White House said.

Davis called the bill’s language on social media overly broad and said Facebook and other private companies are already taking significant steps to help prevent election interference on their platforms. As written, the Democratic bill poses a threat to the First Amendment, he said, noting that it is opposed by the American Civil Liberties Union and other groups.

The ACLU said in a statement that the SHIELD Act “strikes the wrong balance, sweeping too broadly and encompassing more speech than necessary to achieve its legitimate goals” of preventing foreign interference in US elections.

The bill comes as a bipartisan Senate committee said Russia’s large-scale effort to interfere in the 2016 election was a “vastly more complex and strategic assault on the United States than was initially understood.”

In a report earlier this month, the Senate Intelligence Committee described Kremlin-backed social media activities as part of a “broader, sophisticated and ongoing information warfare campaign designed to sow discord in American politics and society.”

Senators urged Trump to warn the public about efforts by Russia and other countries to interfere in US elections — a subject he has largely avoided — and take steps to thwart attempts by hostile nations to use social media to meddle in the 2020 presidential contest.

The House approved a separate bill in June that would require paper ballots in federal elections and authorize $775 million in grants over the next two years to help states secure their voting systems.

Lawmakers also approved a bill in March aimed at reducing the role of big money in politics, ensuring fair elections and strengthening ethics standards. The measure would make it easier for people to register and vote, tighten election security and require presidential candidates to disclose their tax returns.

Republicans called the bill a power grab that amounts to a federal takeover of elections and could cost billions of dollars. Senate Majority Leader Mitch McConnell, R-Ky., said the proposal was dead on arrival in the Senate. McConnell has declined to bring up a stand-alone bill on election security, though he supported an effort to send $250 million in additional election security funds to states to shore up their systems ahead of 2020.

House Democrats are conducting an impeachment inquiry into Trump’s dealings with Ukraine, including his request on a July phone call for the country to open an investigation into his potential 2020 Democratic rival Joe Biden and his family. Trump says he did nothing wrong and calls the conversation “perfect.”