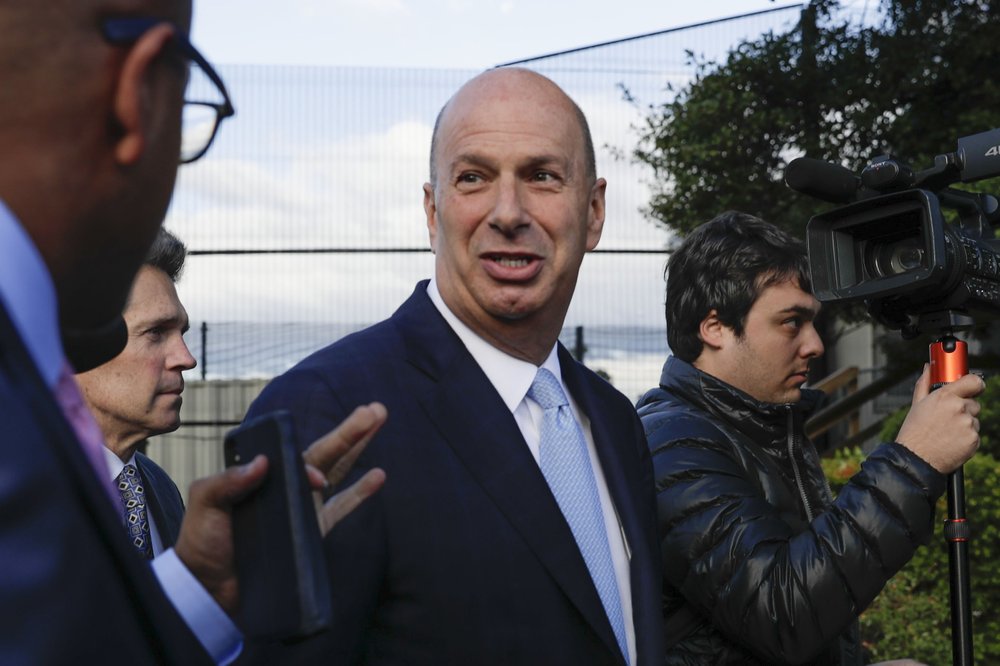 In this Oct. 17, 2019, file photo US Ambassador to the European Union Gordon Sondland, center, arrives for a interview with the House Committee on Foreign Affairs, House Permanent Select Committee on Intelligence, and House Committee on Oversight and Reform on Capitol Hill in Washington. (Photo: AP)

WASHINGTON, Nov. 5 (Xinhua) -- House Democrats on Tuesday released the transcripts of closed-door testimony by two more witnesses in an impeachment inquiry into US President Donald Trump.

The testimony was from Gordon Sondland, the US ambassador to the European Union, and Kurt Volker, the Trump administration's former special envoy to Ukraine, both believed to be key witnesses in the impeachment inquiry over the White House's alleged efforts to withhold a military aid to pressure Ukraine to investigate former US Vice President Joe Biden and his son.

Sondland sent House investigators an addition to his testimony on Tuesday, saying that he now recalls a conversation in Warsaw with a top aide to Ukrainian President Volodymyr Zelensky, during which he said that resumption of the military aid likely would not happen until Ukraine had provided a public anti-corruption statement.

According to his testimony provided last month, Sondland said Trump's personal attorney Rudy Giuliani "kept repeating" Ukrainian gas firm Burisma, in which Biden's son Hunter Biden had served on the board of directors, on their calls, while adding that the former New York City mayor never mentioned the Bidens.

Volker, in his testimony, acknowledged he was out of the loop on matters related to the administration's moves on Ukraine and that he "never got a clear explanation as to what happened" as regard to the withholding of the military aid.

The former US special envoy to Ukraine also said it was correct that no "quid pro quo" had been communicated to him.

In a tweet on Tuesday, House Intelligence Committee Chairman Adam Schiff said the testimony of Sondland and Volker "show the progression of Trump's efforts to press Ukraine into the service of his own personal political goals."

The White House, by contrast, claimed the release of their transcripts shows "there is even less evidence" for impeachment than previously thought.

Press secretary Stephanie Grisham said in a statement that Sondland's testimony didn't "identify any solid source" for his presumption that "there was a link to the aid" and that Volker's testimony "confirms there could not have been a quid pro quo."

"No amount of salacious media-biased headlines, which are clearly designed to influence the narrative, change the fact that the President has done nothing wrong," she added.

The impeachment inquiry, which House Speaker Nancy Pelosi initiated in late September, has entered into a new phase as Democrats began releasing transcripts of closed-door depositions with former and current Trump administration officials on Monday.

Trump has denied any wrongdoing or a "quid pro quo." The White House has refused to cooperate with the impeachment inquiry.