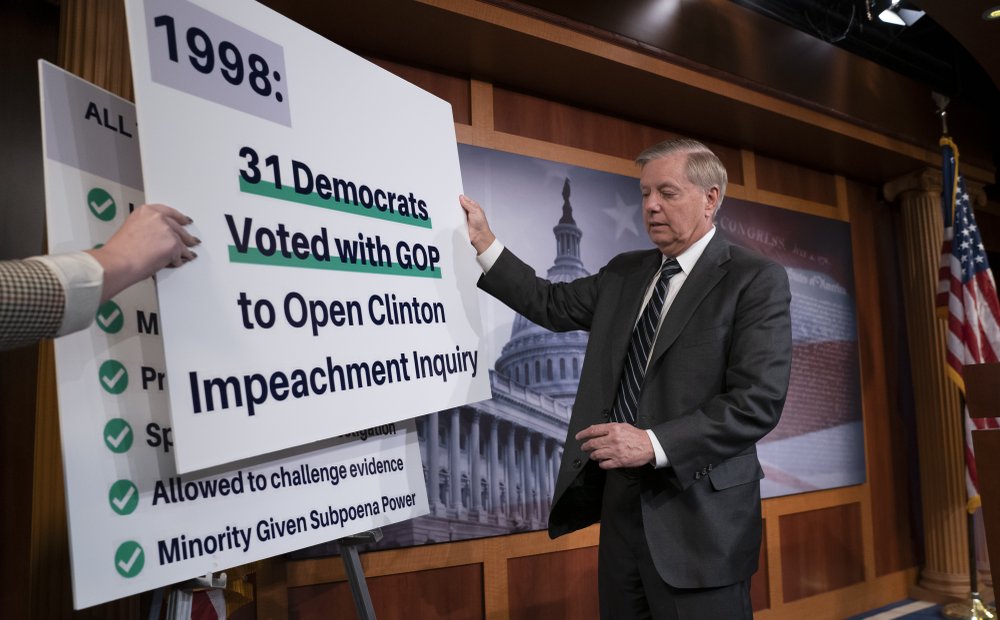 Republican Sen. Lindsey Graham of South Carolina, one of President Donald Trump's chief GOP allies, says he will introduce a resolution condemning the Democratic-controlled House for pursuing a "closed door, illegitimate impeachment inquiry," during a news conference at the Capitol in Washington,Thursday, Oct. 24, 2019.  (Photo: AP)

WASHINGTON, Oct. 29 (Xinhua) -- US House Democrats on Tuesday released the text of a resolution aimed at formalizing procedures of an impeachment inquiry into President Donald Trump.

For the public hearings, the resolution includes language allowing the chairman and ranking member of the House Intelligence Committee to question witnesses for up to 90 minutes and to give that time to committee aides to conduct questioning.

The resolution also allows Republicans to request witness testimony and issue subpoenas but those subpoenas would have to be signed off by Democrats.

The resolution is expected to hit the House floor on Thursday.

The chairs from four House committees said in a joint statement Tuesday afternoon that "the next phase" of the impeachment inquiry "will move from closed depositions to open hearings."

"Soon the American people will hear from witnesses in an open setting," the statement added.

In a statement, the White House press secretary Stephanie Grisham called the impeachment inquiry "an illegitimate sham from the start as it lacked any proper authorization by a House vote."

"This resolution does nothing to change the fundamental fact that House Democrats refuse to provide basic due process rights to the Administration," she added.

The impeachment inquiry into Trump was initiated last month by House Speaker Nancy Pelosi after an anonymous whistleblower had raised concerns about the president's interactions with Ukraine.

Trump was alleged to have abused power by using a military aid that Congress approved to pressure Ukrainian President Volodymyr Zelensky into investigating Biden, the leading 2020 Democratic presidential candidate, so as to help his re-election campaign. Besides, the White House allegedly tried to cover it up.

The White House has said it will not provide documents or witnesses to House investigators because it considered the impeachment inquiry unfair and illegitimate.

Trump has denied any wrongdoing and Republicans are responding more aggressively to defend the president and challenge the impeachment inquiry.