WASHINGTON, Dec. 19 (Xinhua) -- The US House of Representatives on Thursday overwhelmingly approved the revised version of the US-Mexico-Canada trade agreement (USMCA) after months of negotiation with the administration over issues including labor and environmental enforcement. 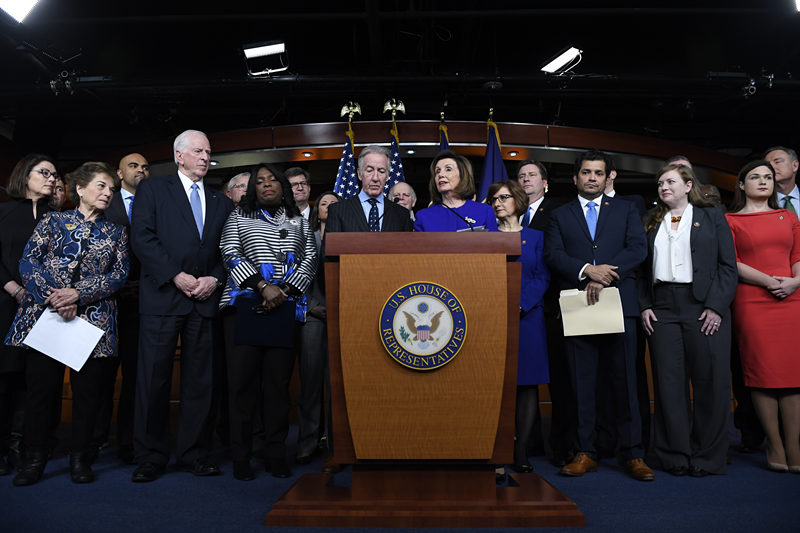 The House passed the agreement in a 385-41 bipartisan vote, sending the replacement of the 25-year-old North American Free Trade Agreement (NAFTA) to the Senate for consideration in early next year. Thirty-eight Democrats, two Republicans and one independent voted against the measure.

The bipartisan vote came just one day after the Democrat-led chamber voted largely along party lines to impeach President Donald Trump for abuse of power and obstruction of Congress, making him the third US president in history to be impeached.

In a statement, US Trade Representative Robert Lighthizer said the USMCA would create tens of thousands of new jobs -- many, importantly, in manufacturing -- and increase export opportunities for American farmers, ranchers and businesses.

The new agreement represents the "gold standard" in US trade policy and will be the "template" for US trade agreements going forward, Lighthizer said.

AFL-CIO, the largest labor federation in the United States, said on Twitter that "we are thankful" to House Speaker Nancy Pelosi and her allies on the USMCA working group, who pushed to "remedy numerous shortcomings" contained in the original USMCA text.

Pelosi, in her remarks before House lawmakers Thursday, said the revised agreement was "light years" ahead of what the Trump administration negotiated with Canada and Mexico.

Despite the landslide bipartisan vote, some lawmakers still argue that the USMCA doesn't go far enough to protect US jobs, among them US Senator Bernie Sanders, a Democratic presidential candidate.

Some Republicans, meanwhile, have expressed concern over concessions the Trump administration made to get Democrats' support for the trade deal. Republican Senator Pat Toomey on Sunday called the revised USMCA a "complete capitulation" to Pelosi and Richard Trumka, president of AFL-CIO.

"USMCA is an exercise, through all types of new provisions, to diminish trade -- and that's why I hope Republicans will reconsider this. We've historically recognized that we are all better off with more open markets," Toomey said.

Senate Majority Leader Mitch McConnell has also said that the revised USMCA is "not as good as I had hoped." However, the Republican-controlled Senate is widely expected to pass the trade deal early next year, after the impeachment trial of President Trump.

While the leaders of the United States, Canada and Mexico signed the proposed USMCA more than a year ago, House Democrats have negotiated for months with Trump administration officials to resolve their concerns about enforcement tools for labor and environmental standards, as well as drug provisions in the new trilateral trade deal.

The two sides reached agreement on the revised version last week, but a labor enforcement provision has drawn backlash from Mexico.

Jesus Seade, undersecretary for North America at the Mexican Ministry of Foreign Affairs, accused the United States of blindsiding Mexico by deciding to send up to five US attaches to monitor labor conditions.

Lighthizer clarified on Monday that the revised deal does not include American "labor inspectors," and on-site labor verifications would be conducted by independent panelists, downplaying Mexican concerns.

While the Trump administration has touted the USMCA as pro-growth, a new analysis published by the Peterson Institute for International Economics (PIIE) on Tuesday showed that the deal is "a net negative" for all three economies.

The USMCA modernizes trading rules and strengthens the enforcement of labor and environmental rights, but its restrictions on auto trade and investment and on auto production "will hurt US industry," said PIIE trade economists Mary Lovely and Jeffrey Schott, authors of the analysis.