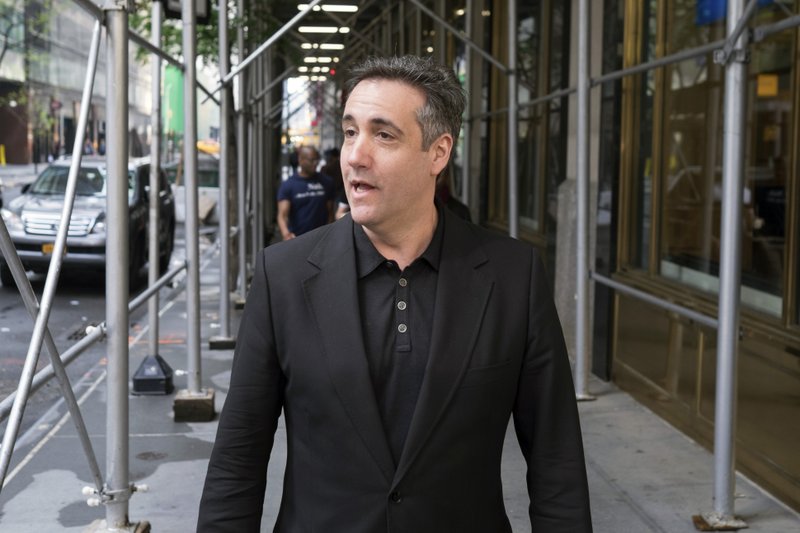 Michael Cohen, President Donald Trump's former personal attorney, stops to talk to a member of the media in New York May 4, 2019. (Photo: AP)

The US House intelligence committee on Monday released two transcripts of closed-door interviews with Michael Cohen, President Donald Trump’s former personal lawyer, along with some exhibits from the testimony.

The committee’s decision to release the transcripts came two weeks after Cohen reported to federal prison for a three-year sentence. Cohen pleaded guilty last year to campaign finance violations, lying to Congress and other crimes. He is the only person charged with a crime in connection with the hush-money payments made to women who allege they had affairs with Trump.

The transcripts are from interviews the panel conducted with Cohen in February and March. The vote to release them, which was held behind closed doors, was 12-7.

Much of the discussion during Cohen’s interview was related to pardons and whether Trump or his lawyers were dangling them in front of Cohen as the government began to investigate him. The lawmakers were also interested in talking to Cohen about a false statement he delivered to Congress in 2017 about a real estate project in Moscow, questioning who may have edited that statement and whether he was directed to lie. Cohen provided documents to the panel about the editing process leading up to the statement.

In public testimony before a separate House committee in February, Cohen said Trump’s attorneys, including Jay Sekulow, had reviewed and edited the written statement about the Moscow project. Cohen acknowledged in a guilty plea last year that he misled lawmakers by saying he had abandoned the Trump Tower Moscow project in January 2016, when in fact he pursued it for months after that as Trump campaigned for the presidency.

Cohen became a key figure in congressional investigations after turning on his former boss and cooperating with special counsel Robert Mueller’s Russia probe. Mueller’s final report, released in April, examined conduct related to Cohen as one of several possible instances of obstruction of justice by the president.

Mueller’s team wrote in its report that Cohen told one of Trump’s personal lawyers after an FBI raid on his home that “he had been a loyal lawyer and servant” and “he was in an uncomfortable position and wanted to know what was in it for him.”

The Intelligence committee it also seeking more information about Cohen’s 2017 testimony from four lawyers for the Trump family.

House Intelligence Committee Chairman Adam Schiff, D-Calif., said in a statement last week that Cohen’s testimony this year, along with materials in the committee’s possession, raises “serious, unresolved concerns about the obstruction of our committee’s investigation that we would be negligent not to pursue.”

The lawyers who received the requests are Sekulow; Abbe Lowell, lawyer for Ivanka Trump, the president’s daughter, and her husband, Jared Kushner; Alan Futerfas, lawyer for Donald Trump Jr.; and Alan Garten, lawyer for the Trump Organization.