The US House of Representatives, spurred by a series of horrific mass shootings, passed a bill on Friday that would ban assault weapons for the first time in decades. 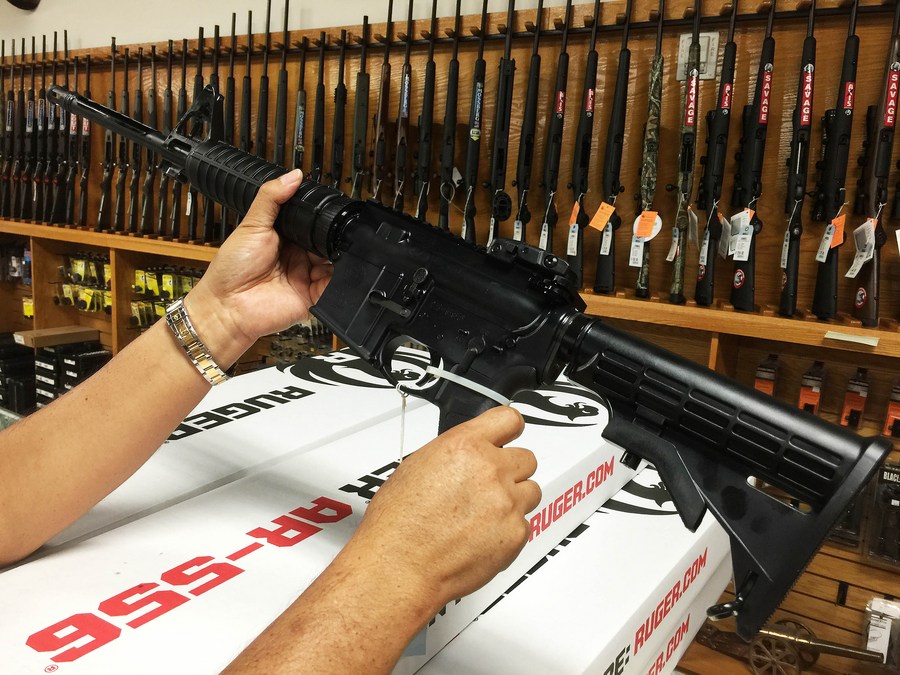 Photo taken with mobile phone on June 13, 2016 shows a customer looking on an AR-15 semi-automatic rifle at a shop in Orlando, the United States. (Photo: Xinhua)

The legislation was approved by a 217 to 213 vote in the Democratic-majority House and now goes to the Senate -- where it is likely doomed to fail.

Gun reform remains deeply divisive in the United States -- despite the deadly scourge of mass shootings -- with only two Republicans joining Democrats to back the assault weapons ban in the House.

In the 100-member Senate, Democrats have just 50 seats and 10 Republican votes are needed to bring a measure to the floor for consideration.

Congress passed a 10-year ban on assault rifles and certain high-capacity magazines in 1994 but lawmakers let it expire in 2004 and sales of the weapons have soared since then.

Democratic House Speaker Nancy Pelosi called the latest bill a "crucial step in our ongoing fight against the deadly epidemic of gun violence in our nation."

It would ban the sale, import, manufacture or transfer of certain semi-automatic weapons such as those used in recent mass shootings in Buffalo, New York, Uvalde, Texas, and Highland Park, Illinois.

An avowed white supremacist shot dead 10 African Americans at a supermarket in Buffalo in May.

Nineteen schoolchildren and two teachers were killed by an 18-year-old man at an elementary school in Uvalde that same month and seven people were shot dead at a July 4 parade in Highland Park.

After the Uvalde massacre, President Joe Biden appealed to lawmakers to again ban assault rifles or at least raise the minimum age for buying them from 18 to 21.

But Republican lawmakers, who see such a restriction as going against the constitutional right to bear arms, have refused to go along.

In a statement, Biden said "40,000 Americans die from gunshot wounds every year and guns have become the top killer of children in the United States.

"We know an assault weapons and large-capacity magazine ban will save lives," he said.

A House committee, in a report released this week, said US gun makers earned $1 billion in the past decade from sales of AR-15-style semiautomatic weapons.

"The gun industry has flooded our neighborhoods, our schools and even our churches and synagogues with these deadly weapons and has gotten rich doing it," Democratic Representative Carolyn Maloney said.

"They are choosing their bottom line over the lives of their fellow Americans," the New York lawmaker said at a hearing attended by relatives of victims of gun violence.

Republican lawmakers pushed back against their Democratic colleagues.

"We'll continue to protect the rights of all law-abiding gun owners who safely use, store and carry firearms including the AR-15," Comer said.