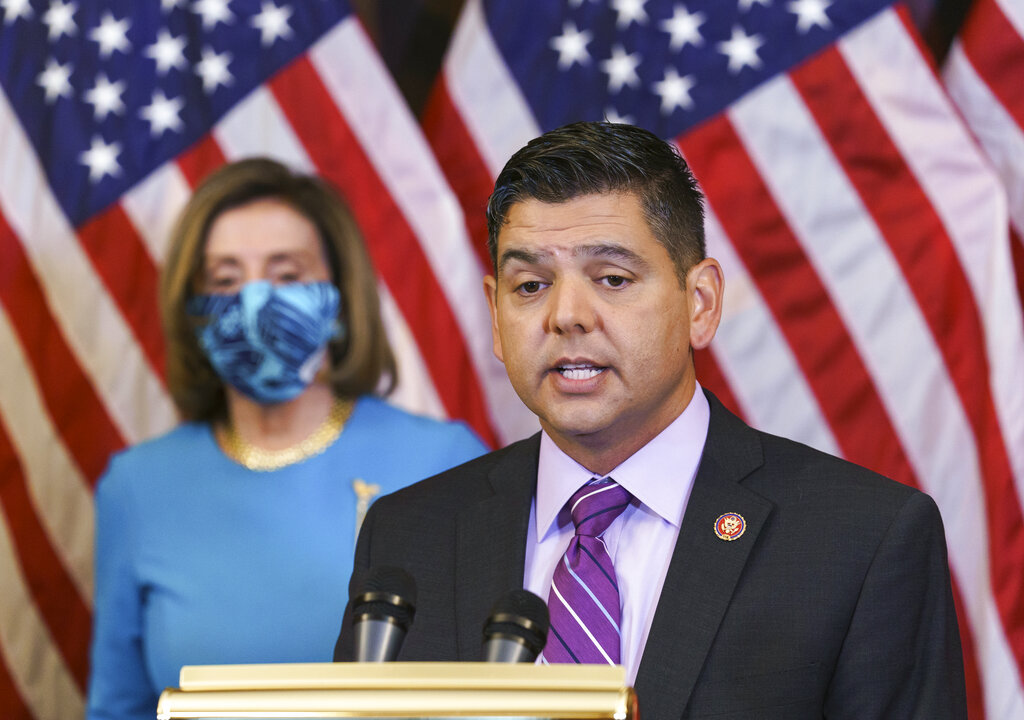 Rep. Raul Ruiz, D-Calif., chairman of the House Hispanic Caucus, joins Speaker of the House Nancy Pelosi, D-Calif., left, to discuss the upcoming vote on the American Dream and Promise Act of 2021, a bill to help reform the immigration system, at the Capitol in Washington, Thursday, March 18, 2021. Photo: AP

WASHINGTON, March 18 (Xinhua) -- The U.S. House on Thursday voted to pass two bills that will grant a pathway to citizenship for undocumented immigrants brought to the country during their childhood and for some migrant farmers, respectively.

The legislative efforts were part of House Democrats' bigger endeavor to pass President Joe Biden's broad package to overhaul a broken immigration system for which the administration and congressional Democrats blamed on the Donald Trump administration.

The Dream and Promise Act, which passed 228-197 with just nine Republican defections, would allow the so-called "Dreamers" -- unauthorized immigrants who came to the United States as minors -- as well as beneficiaries of certain temporary humanitarian programs to apply for permanent legal status and eventually become U.S. citizens.

If the bill gets approved by the Senate, which by no means is imminently possible given the recent surge of unaccompanied children on the southern border, Democrats will achieve the long-sought goal of delivering on their promise of legal status to the "Dreamers."

In 2012, then President Barack Obama issued the Deferred Action for Childhood Arrivals (DACA) executive order after the Development, Relief and Education for Alien Minors Act (DREAM ACT) failed to pass in Congress several times. The young people impacted by the DACA and the DREAM Act are often referred to as "Dreamers."

Later on Thursday, the House also passed the Farm Workforce Modernization Act by a 247-174 vote, with 30 Republicans voting in support and one Democrat against. The bill would offer a path for seasonal migrant farmworkers to get a U.S. green card, and ultimately citizenship.

Through a piecemeal approach, the Democrats' bigger ambition is to pass a far-reaching immigration reform package proposed by the Biden administration that includes an eight-year pathway to U.S. citizenship for roughly 11 million migrants currently residing in the country without legal status.

In addition to the persistent Republican opposition, the sweeping immigration overhaul has been further complicated by the recent influx of immigrants along the U.S.-Mexico border, for which Republicans assailed what they said were Biden's "open border" policies.