Republicans in the US House of Representatives failed to reach agreement on Tuesday on compromise legislation to protect young “Dreamer” immigrants from deportation and bolster border security, a lead negotiator told reporters. 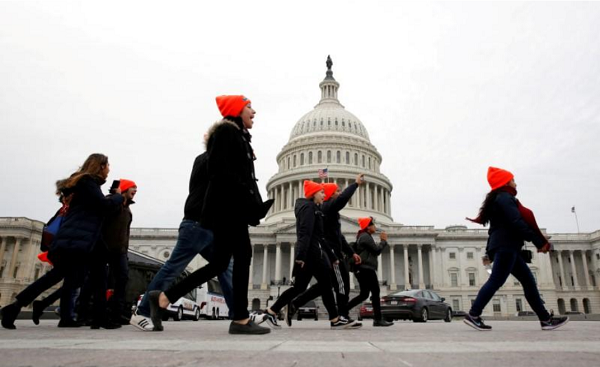 Protesters who call for an immigration bill addressing the so-called Dreamers, young adults who were brought to the United States as children, rally on Capitol Hill in Washington, DC, US, December 20, 2017. (File Photo: Reuters)

There is “no deal at this point,” said Representative Mark Meadows, who heads a group of hard-right conservative Republicans as he emerged from a 90-minute meeting with House Speaker Paul Ryan and other leading Republicans.

Talks will continue, he said.

Republicans are deeply split over immigration legislation and face a revolt by centrist lawmakers in their party who had set a Tuesday deadline for reaching a compromise or achieving substantial progress.

Without such progress, the lawmakers have warned they will set in motion a rarely used “discharge petition” procedure that would force votes in the full House on a series of immigration bills. They believe their bipartisan plan would pass the House, which would be an embarrassment for Ryan because that legislation is mainly supported by Democrats.

The No. 3 House Republican, Representative Steve Scalise, left the meeting telling reporters: “I would still hope that we don’t get a discharge petition signed.”

But supporters of the manoeuvre were only three short of the 218 signatures needed to force the full House to confront the issue just months before November congressional elections in which Republicans are in a tough fight to maintain their congressional majorities.

Republicans have been battling among themselves over President Donald Trump’s demand for building a wall on the southwest border with Mexico, the type of protections to be provided to young Dreamers who were brought to the country illegally as children, and conservative demands for clamping down on new immigration.

Reflecting their disagreements, Representative Mark Walker, who heads a large group of House conservatives, said: “There’s not at this point anything to agree on.”

Even if Ryan manages to write a compromise bill toughening US border security and ending the threat of deportation for Dreamers, his solution could be rebuffed by Senate Democrats whose support is needed for passage in that chamber.

House aides familiar with the months-long effort to dislodge immigration legislation from a conservative blockade acknowledged that Democrats were not part of the consultations.

‘NOT GOING TO FLY’

Republican Senator Jeff Flake, a central figure in efforts to protect Dreamers now that Trump wants to end the Obama-era Deferred Action for Childhood Arrivals (DACA) program that temporarily protects them from deportation, scoffed at the idea of the House moving ahead with a Republican-only bill.

He added: “If it’s anything like what was part of the Goodlatte bill, that’s just not going to fly.”

House Judiciary Committee Chairman Bob Goodlatte has been pushing legislation to extend Dreamers’ temporary legal status, but without any prospect for US citizenship.

That measure would also reduce legal immigration and prevent US citizens from sponsoring some relatives living abroad who want to relocate to the United States.

A similar measure failed in the Senate last February.

On another front, US Attorney General Jeff Sessions took actions on Monday that potentially could exclude foreigners seeking asylum because of gang attacks, domestic abuse and other violence.

The Trump administration has also ramped up the practice in recent months of separating immigrant children and parents who cross US borders without visas and holding them in detention centres.

Senator Dianne Feinstein, the senior Senate Judiciary Committee Democrat, introduced legislation last week to end the practice. At a news conference on Tuesday, Feinstein acknowledged she did not have any Republican backers.

“Children are terrified, parents are heartbroken and families are being destroyed,” Feinstein said.