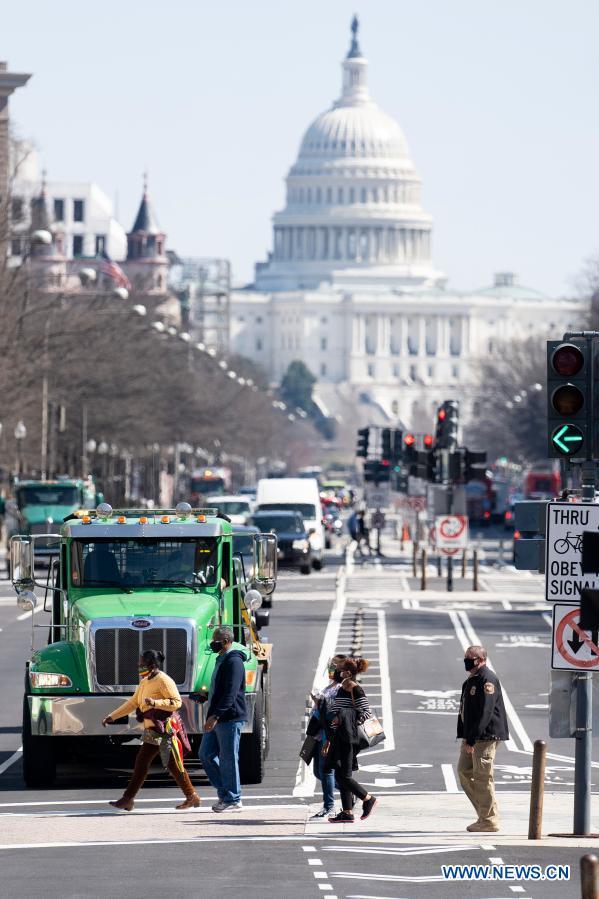 People walk across a street backdropped by the U.S. Capitol building in Washington, D.C., the United States, on March 10, 2021. (Photo: Xinhua)

WASHINGTON, March 10 (Xinhua) - The U.S. House of Representatives on Wednesday approved the final version of the 1.9-trillion-U.S.-dollar COVID-19 relief bill, sending it to President Joe Biden's desk for his signature amid rising inflation worries.

The Democrats-controlled House approved the final relief bill by a vote of 220 to 211 almost along party lines. The Senate passed the bill in a 50-49 vote last week after making changes to the original version passed by the House.

The legislation, known as American Rescue Plan Act of 2021, includes a new round of up to 1,400 dollars of direct payments for most Americans, 350 billion dollars for state and local governments, as well as funding to directly combat the pandemic. It also extends an additional 300-dollar weekly federal unemployment benefit through September.

"We are moving full speed ahead on the implementation of the bill, because we know the American people need help, and need it as soon as possible," Psaki said at a White House press briefing.

It marks the sixth coronavirus-related legislation enacted by U.S. Congress since the pandemic began more than a year ago. An inability to contain the virus has already caused more than 528,000 deaths in the country, according to a tally by Johns Hopkins University.

Democrats have touted the 1.9-trillion-dollar measure as one of the most popular bills in decades, calling it a bold COVID-19 relief for people across the country, which would significantly cut poverty and boost recovery.

However, Republicans argue that it is too costly, accusing Democrats of abandoning bipartisanship to jam through liberal policies unrelated to the pandemic, as Congress passed five pandemic rescue packages totaling 4 trillion dollars in a bipartisan way last year.

Wall Street and public-sector economists have revised up forecasts for U.S. economic growth due to the massive relief package and the vaccine roll-out.

The Organization for Economic Cooperation and Development (OECD) on Tuesday predicted that the U.S. economy would expand 6.5 percent in 2021, up from 3.2 percent estimated three months ago.

The U.S. economy contracted 3.5 percent in 2020 as the pandemic depressed consumer spending and business investment, the largest annual decline of U.S. gross domestic product (GDP) since 1946.

Some renowned economists, including former U.S. Treasury Secretary Larry Summers, have also warned that too much stimulus could lead to an overheating economy and inflationary pressures, with consequences for the value of the dollar and financial stability.

"I very much agree with Larry Summers's view that the Biden budget stimulus package is excessively large and will cause the U.S. economy to overheat," Desmond Lachman, resident fellow at the American Enterprise Institute and a former official at the International Monetary Fund (IMF), told Xinhua.

Coming on top of the 900-billion-dollar relief package approved by Congress in December 2020, Biden's 1.9-trillion-dollar package means that the U.S. economy would get fiscal stimulus of around 13 percent of U.S. GDP in 2021, he said.

Lachman believed that "it is difficult to see how the U.S. economy will not overheat" by the end of the year, as the U.S. broad money supply is now growing at 30 percent and there is a huge amount of pent-up household demand because of the pandemic.

Since the start of the year, the yield on the benchmark 10-year U.S. Treasury note has jumped from 0.9 percent to around 1.5 percent amid growing concern about inflation. Meanwhile, the market's inflationary expectation for the next five years has jumped to around 2.4 percent, a level above the Federal Reserve's inflation target of 2 percent.

Summers, who was treasury secretary for former President Bill Clinton and economic adviser to former President Barack Obama, recently warned that the Fed could be forced to raise interest rates next year, sooner than Fed officials and markets currently expect.

But Fed Chair Jerome Powell has played down concerns of an inflationary outbreak. "Inflation dynamics do change over time, but they don't change on a dime, and so we don't think how a burst of fiscal support or spending that doesn't last for many years would actually change those inflation dynamics," Powell said at a congressional hearing last month.

"We have been living in a world that for a quarter of a century where all of the pressures were disinflationary pushing downward on inflation, we have averaged less than 2 percent inflation for more than the last 25 years," he said. Enditem 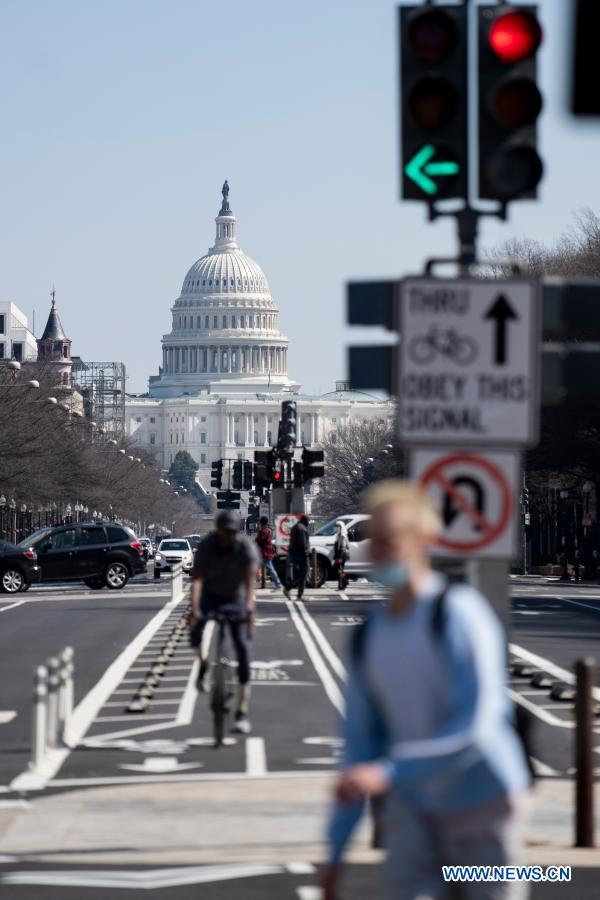 People are seen at a crossroads backdropped by the U.S. Capitol building in Washington, D.C., the United States, on March 10, 2021. The U.S. House of Representatives on Wednesday approved the final version of the 1.9-trillion-U.S.-dollar COVID-19 relief bill, sending it to President Joe Biden's desk for his signature. (Photo: Xinhua)