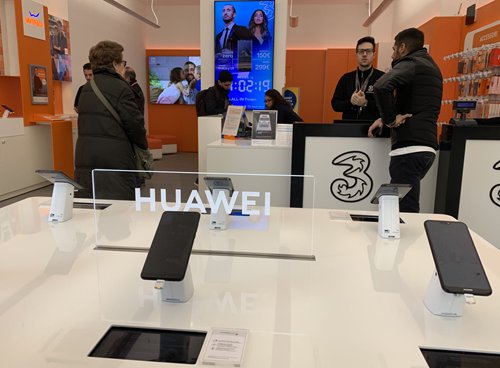 Huawei smartphones are displayed at a store in Milan, Italy in March, 2019. Photo: Chen Qingqing/GT

The tremendous pressure from the Trump administration on Chinese tech giant Huawei is hurting the high-tech industry, including the deployment of 5G, and Washington's continuing ideological battle shows US hegemony will endanger global growth, analysts and industry representatives said.

Some European and Asian countries are now caught in the crosshairs of the escalating tech Cold War between China and the US, as more countries are feeling the political pressure from the Trump administration's ban on Huawei, and local carriers are worried about the delay in 5G as well as sales of Huawei smartphones. Major suppliers of components in Asian countries, such as South Korea and Japan, are nervous about the uncertainties ahead following the US clampdown on the Chinese company, keeping a close eye on the changing supply plans of components and technologies.

While some local carriers are canceling the launch of new Huawei gadgets, politicians and industry representatives in Europe and Asia are defying US moves by continuing to deploy Huawei equipment in core mobile networks, as they will help accelerate the deployment of the next generation of wireless technologies.

"The whole situation is very worrisome…today, it's Europe which bears the collateral damage, as the US will do 5G without Huawei and China will move forward with Huawei," Stéphane Richard, head of a major European carrier Orange, said at a TV program with French news outlet BFMTV on Wednesday, implying that Europe may lag behind in 5G amid the new tech Cold War between China and the US.

While some carriers like Vodafone, EE and Japan's SoftBank are postponing the presale of Huawei smartphones due to Google's decision to cut off part of Android services to Huawei, local carriers cannot afford to launch 5G networks without the Chinese company, which is also the largest telecoms equipment provider in the world.

For instance, EE is still using Huawei's bases in its 5G deployment, as the Chinese firm has been "absolutely instrumental" in building the 4G network that will underpin EE and Vodafone's next-generation 5G network infrastructure, local industry news site totaltele.com reported on Thursday.

EU leaders also vowed not to follow Trump's ban, as it was not appropriate to start a trade dispute over technology, according to media reports. German Chancellor Angela Merkel, Dutch Prime Minister Mark Rutte and French President Emmanuel Macron have all expressed their stance on the matter.

"The US is clearly waging an economic war in a most troubling way," Kevin Curran, professor of Cyber Security at Ulster University, told the Global Times via email.

The conflict could indeed slow down the deployment of "proper" 5G in countries which do not use Huawei equipment, he said, noting that many have Huawei equipment in the backbone, and to be forced to connect to non-Huawei 5G infrastructure could prove to be very expensive.

Industry insiders are calling on the US to drop this ideological battle and let technology cooperation continue, especially after US politicians implied they would "kidnap" Huawei to force China's hand in the next round of trade negotiations.

"For those who still trust in the fair market and competition spirit of the US, it's time to drop their fantasies, as no one will jeopardize their own interests and development opportunities just to make Washington happy," Xiang Ligang, director-general of the Beijing-based Information Consumption Alliance, told the Global Times on Friday.

Although countries like France and Germany are traditional allies of the US, the rising protectionism and egotism of Washington are making the alliance wobbly at this point, he said.

US politicians have been spreading rumors about Huawei without providing any concrete evidence, and this trade war, in addition to the tech war, has created global market turbulence which may hinder industry cooperation, Lu Kang, spokesperson of the Chinese Foreign Ministry, told a routine press briefing on Friday.

"The US side is misleading the public and stirring up an ideological battle, which is illegitimate," Lu said, noting that over the past 40 years, differences in ideology have not stopped China and the US from working together on trade, industry and technology.

Huawei Vice Chairman Hu Houkun told an industry conference in Germany on Thursday that such reckless decisions by the US government can cause a great deal of harm to consumers and businesses in Europe, as Huawei accounts for roughly 20 percent of the European smartphone market.

While former White House chief strategist Steve Bannon suggested that killing Huawei is more important than a trade deal with China, it's time to say no to the "madness" of American supremacy, which will risk isolating itself from the world, analysts said.

Despite ongoing struggles, Huawei founder Ren Zhengfei called for broader collaboration across industries, which would guarantee the future of technology.