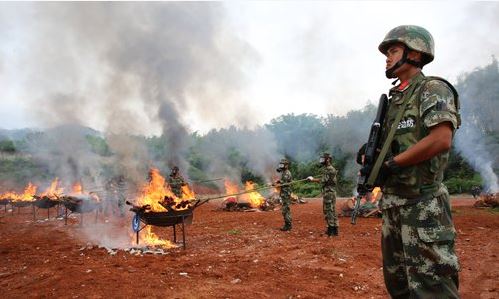 Border guards destroy 6.63 tons of various drugs in public in Mangshi, Southwest China's Yunnan Province, which sits on the China-Myanmar border, on the 31st International Day against Drug Abuse and Illicit Trafficking on June 26, 2018. (Photo:VCG)

The Western world has had a prejudice against China's development achievements for a long time, including China's efforts in drug control in the international community, despite the fact that China's drug control efforts have won recognition from many other countries.

Yu Haibin, a senior official with the office of the China National Narcotics Control Commission (NNCC) and the Chinese Ministry of Public Security's Narcotics Control Bureau, explained to the Global Times the efforts and achievements China has made in fulfilling its international responsibility of fighting against illegal drugs.

Attorney General Jeff Sessions of the US released a 43-count indictment on August 22 against two Chinese citizens, 35-year-old Zheng Fujing and his father Zheng Guanghua, at a news conference in Cleveland. The Chinese father and son resided in Shanghai and were alleged by Sessions to have distributed more than 250 types of synthetic opioids, manufactured in China, to 37 US states, including Ohio, according to the website of the US Immigration and Customs Enforcement agency.

The indictment also attributed the overdose deaths of two Ohio residents to the drugs sold by the Chinese father and son. Two days before Sessions announced the indictment, US President Donald Trump tweeted that fentanyl from China is destroying the US.

Sessions described the action as a "historic new step."

"Fentanyl and its analogues are the number one killer drug in America today, and mostly come from China," said Sessions, adding, "That's why the Department of Justice under President Donald Trump has taken historic new steps against the threat of Chinese fentanyl."

"Today we are announcing an indictment of the leaders of the Zheng drug trafficking organization based in China. By cutting off fentanyl and its analogues at the source, we can save American lives," said Sessions.

Yu told the Global Times that China will not meddle in the US domestic affairs of filing charges against foreign citizens according to its laws. However, China will protect its citizens' legitimate rights and safeguard them to be free from illegal criminal liability and unfair treatment.

China will pay close attention to the further progress of the case and is willing to provide assistance according to the law. "But China hopes the US side will notify the Chinese side in advance of important actions in the future, so that both sides can move in lockstep with each other. Only in that way can we build a solid foundation and foster a sound environment for the future China-US cooperation," said Yu.

Yu told the Global Times that Zheng's case is a joint investigation by China and the US, in which China has made tremendous efforts including actively cooperating in actions conducted by the US side, providing aid to the US investigation and sharing information with the US in a timely manner, and China's efforts have won recognition and acclaim from the Drug Enforcement Administration (DEA) of the US and its relevant law enforcement departments.

However, in China, an indictment should be made according to the Chinese law and evidence. The US side failed to provide China any evidence to prove Zheng violated Chinese law, and the US knows clearly about that, Yu told the Global Times. The US unilateral prosecution against Zheng and his father has caused a big problem for the joint investigation of the two sides, and China regrets this, Yu said.

This is not the first time that the US side took proactive action unilaterally without notifying China during a joint investigation. A year ago, the US Department of Justice (DOJ) charged two Chinese nationals, 40-year-old Yan Xiaobing and 38-year-old Zhang Jian, with selling fentanyl to Americans, the Washington Post reported on October 17, 2017.

Similarly, the US DOJ never mentioned its Chinese counterparts' efforts in prohibiting new psychoactive substances (NPS), let alone the achievements it made with China's cooperation.

The US president and the DOJ neglected to mention that the Chinese government has taken an unprecedented effort in fentanyl control considering concerns from the international community, especially the US, even though fentanyl abuse is not a problem in China.

China has rolled out joint investigations with the US on several cases such as the Sun Lidi case in 2016. In Sun's case, China helped the US solve about 10 deaths due to fentanyl overdose. Currently, more than 10 cases are jointly under investigation by the two countries.

Yu told the Global Times that merely a dozen of clues the US provided to China are involved with international parcels since 2017. China does not deny that some of the fentanyl circulating in the US might come from China, but it is biased and groundless to jump to the conclusion that most of the US fentanyl is shipped from China.

In contrast to the blame cast by the US, China's control over domestic NPS production is in a leading position worldwide.

NPS is a term rather unfamiliar to the Chinese public. However, it is quite popular in Western countries. Dubbed as the third generation of drugs following traditional and synthetic drugs, NPS are generated through chemical-structural modification on controlled drugs by drug dealers in order to avoid inspections. This makes the drug easy to hide from authorities, with equal or stronger stimulatory or hallucinogenic effects to the original drugs.

"NPS control is hard in China because the drugs are not abused in China in the same way as in Western countries. However, China has still made significant and effective achievements in transnational cooperation, showcasing China's sense of responsibility as a great power," Yu told the Global Times.

Furthermore, China introduced a regulation on October 1, 2015 to list 116 types of NPS into the controlled drugs list in China.

According to Yu, a drug should be evaluated by a commission comprised of professionals and pass a debate before it enters into China's controlled drug list. But the update period of NPS is very short compared with the deliberation period, because a fractional modification on its chemical structure could generate a new drug free from control.

"Usually, a drug will disappear from the market a month after it has been listed, and a new drug will be developed in two months," Yu Haibin told the Global Times. The situation makes it hard to manage the drug control list. China still took a short-cut to make significant progress. As of September 1, 2018, a total of 170 NPS have been listed in China, among which 25 of them are under close attention of the international community and 21 of them have been listed by the United Nations as controlled drugs.

US officials who have kept years of contacts with Chinese narcotics control departments speak highly of China's efforts in drug control. A US official with the DEA spoke highly of the joint c0operation between drug enforcement departments in both China and the US at press conference held by the Chinese NNCC on November 3, 2017, according to the website of the Chinese NNCC. National lab for drug testing

Drug abuse is a global issue and no country can escape from it or solve the global problem by itself. International cooperation is an inevitable trend in drug control. Cooperation between China and the US never ceased despite constant slander from the US on China.

The establishment of China's national-level laboratory for drug testing in 2008 is a result of the mutual beneficial and win-win cooperation between the two countries. Testing results from this lab have been a big help to solving many cases.

"The lab is used to source and analyze massive amounts of seized drugs, screening and evaluating new drugs and testing a region's drug-using status quo through analyzing human hair and samples of city sewage water," Hua Zhendong, an officer with the lab, told the Global Times.

The national drug lab has tested more than 2,000 samples of suspicious substances, among them, 1,241 were confirmed containing NPS, 174 contain illegal substance, and 32 substances contained in 815 samples have been incorporated as new controlled drugs from the beginning of this month.

The lab also works as a communication platform for sharing information with other countries. "When the lab was established, the DEA provided us with strong technical support," said Hua. After 10 years of development, the national drug lab has become a first-class drug lab running neck and neck with the drug lab in the DEA.

In the lab, there is a room specially designed for a nuclear magnetic resonance spectrometer (NMR) to test NPS. The million dollar machine is used to analyze the chemical structure of organics in scientific research institutes and enterprises.

Hua told the Global Times that in China drug dealers need the equipment to test whether the chemical structure of their newly developed synthesis aligns with the designed structure. At the same time, drug purchasers require a test spectrum as a quality certification in drug dealing. Therefore, China suggested that the US side check the customers' list of the equipment and notify China of the result.

China has over 2,000 NMRs currently, and these devices also help China trace NPS related clues, including information about fentanyl manufacturing and vending by monitoring those NMRs that provide test service. "The new idea works, as some clues have been traced by this means," Hua said, adding that China and the US now are working together to develop automatic matching software to help improve the efficiency.

It is undeniable that China has made a significant contribution to international drug control. Unfortunately, these efforts have been neglected by the US administration.