The United States on Monday announced sanctions on three Venezuelans and 20 companies with ties to socialist President Nicolas Maduro for narcotics trafficking, with US Vice President Mike Pence calling for more nations to increase pressure on Caracas. 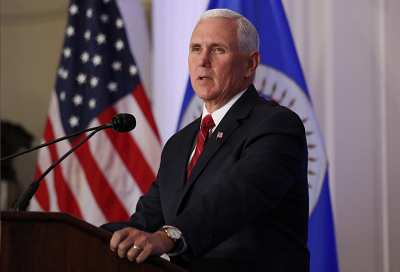 US Vice President Mike Pence addresses the Organization of American States at the OAS headquarters in Washington, US May 7, 2018 (Photos: Reuters)

The new sanctions continue a pattern of stepped-up US measures on individuals connected to Maduro, who is blamed by President Donald Trump’s administration for a deep recession and hyperinflation that have caused food shortages in Venezuela and sent a exodus of migrants into neighboring countries.

The individuals sanctioned on Monday are fairly low-profile and the move is unlikely to create major economic hardship.

Trump has been considering but has so far opted not to impose sanctions on a Venezuelan oil services company and on insurance coverage for tankers carrying Venezuelan oil. Those measures are still under consideration, though, one administration official said on Monday, speaking on condition of anonymity. 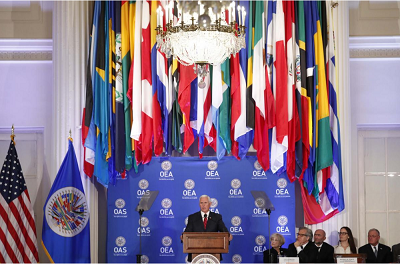 US Vice President Mike Pence addresses the Organization of American States at OAS headquarters in Washington, US May 7, 2018.

Pence told the 35-nation Organization of American States - which includes Venezuela as a member - that they needed to take greater steps to isolate Maduro.

“We believe it is time to do more, much more,” Pence said in an address to the OAS in Washington. “Every free nation gathered here must take stronger action to stand with the Venezuelan people and stand up to their oppressors.”

Pence said the OAS should suspend Venezuela’s membership, and urged other members to cut off the nation’s leaders from financial systems and restrict their travel visas.

He also called on Maduro to suspend elections scheduled for May 20, saying he expected voter intimidation and manipulation of data. “There will be no real election in Venezuela on May 20, and the world knows it,” Pence said.

The suggestion was immediately rejected by Caracas. “There is zero possibility that elections will be suspended,” said Samuel Moncada, Venezuela’s ambassador to the United Nations, condemning Pence’s speech. 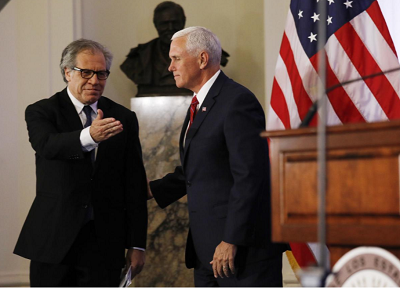 Maduro, himself subject to sanctions last year, regularly laughs off Washington’s disapproval and blames the US “empire” for his country’s economic woes, saying it is trying to undermine his administration.

Of the newly sanctioned companies, 16 are based in Venezuela and four in Panama. They are owned or controlled by the three individuals, the US Treasury said in a statement.

The measures are aimed at having a “chilling effect” on other drug traffickers in Venezuela and are one in a series of many steps, said Carlos Trujillo, US ambassador to the OAS.

“I think the (Trump) administration is willing to do anything, whatever it takes, to make sure that Venezuelan people get to enjoy democracy and the liberties that come with it,” Trujillo said in an interview.

Trujillo said he thinks Venezuela could leave the OAS by the end of 2018 - something he said was needed for the group to “be taken seriously.”

“Venezuela has said in the past that they want to leave, but it seems they don’t find their way to the door,” he said.