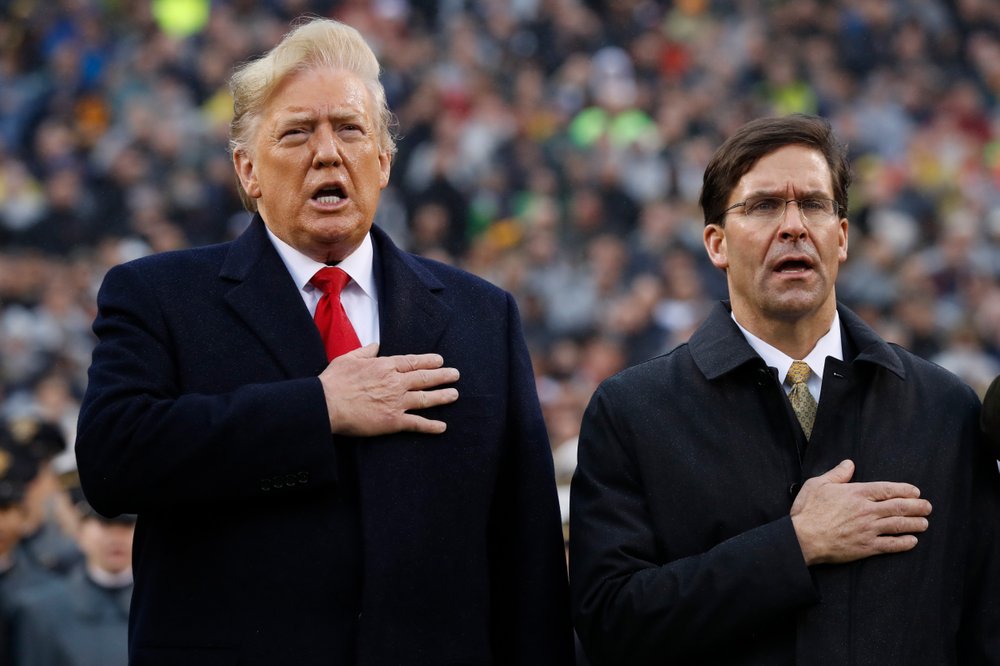 US President Donald Trump and Secretary of Defense Mark Esper participate in the Pledge of Allegiance before the start of the Army-Navy college football game in Philadelphia, Saturday, Dec. 14, 2019. (Photo: AP)

US Secretary of State Mike Pompeo and Defense Secretary Mark Esper were meeting their Indian counterparts Wednesday for strategic and security talks as both countries deal with domestic political crises.

The Trump administration is trying to push its strategy to counter the rising influence of China. But the meeting comes amid widespread protests and violent clashes in India over a new citizenship law and under the shadow of the expected impeachment vote Wednesday evening against President Donald Trump in the House.

The State Department said the talks with India’s foreign minister, Subrahmanyam Jaishankar, and the defense minister, Rajnath Singh, would reflect “the rapid growth of the vital strategic partnership between the United States and India.” None of the four men spoke to reporters at the start of the meeting at the State Department.

China’s growing global footprint is of particular concern for both the US and India and for challenges on the Indian subcontinent, notably the rivalry between India and Pakistan. Trump created a stir this year by suggesting that India might be open to US mediation over the disputed region of Kashmir. India has rejected any international component to resolving that dispute with Pakistan.

Meantime, India’s new law that grants citizenship on the basis of religion has drawn deep opposition. It provides a path to citizenship for Hindus, Buddhists, Christians and other religious minorities who are in India illegally but can demonstrate religious persecution in Muslim-majority Bangladesh, Pakistan and Afghanistan. It does not apply to Muslims.

The Trump administration has spoken out forcefully against repression of Muslims and other religious minorities in China and Myanmar, but has remained relatively silent on India’s proposed law, which Modi has defended as a humanitarian gesture.

In one of the few US public comments about the law, the top US diplomat for South Asia, Alice Wells, told Congress in late October that the administration is concerned about the possible denial of citizenship to vulnerable people. But she also also noted the legal challenges to the move.

``We will continue to watch this very closely but I would stress that the appeal process is still open, the judicial process is still working in India. And as a democracy, we respect other democracies abilities to self-police and self-regulate,” she said.