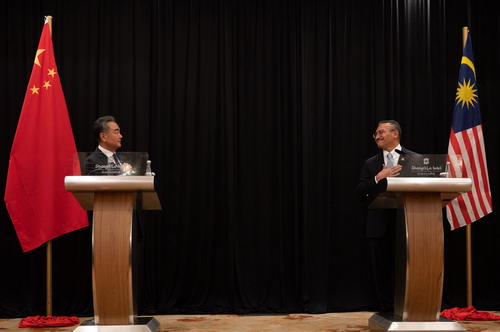 In response to a question on the impact of the U.S. Indo-Pacific strategy on the East Asia cooperation, Wang told a joint press conference with Malaysian Foreign Minister Hishammuddin Hussein that East Asia is the most dynamic region in today's world, and is also the economy with the biggest potential going forward.

The strategy is to trumpet the old-fashioned Cold War mentality to stir up confrontation among different groups and blocs and to stoke geopolitical competition, in a bid to maintain the dominance and hegemonic system of the United States, he said.

The strategy contravenes the spirit of mutual benefit and win-win spirit that has been pursued by East Asia cooperation, impacts the regional cooperation architecture with ASEAN (the Association of Southeast Asian Nations)  at the center and it will eventually undermine the prospect of peace and development of East Asia, he said.

Wang further pointed out that the strategy itself is a big underlying security risk. If being forced forward, it would not only wind back the clock of history, but also mark the beginning of danger, so he believes that all parties could see this clearly and will stay vigilant against it.