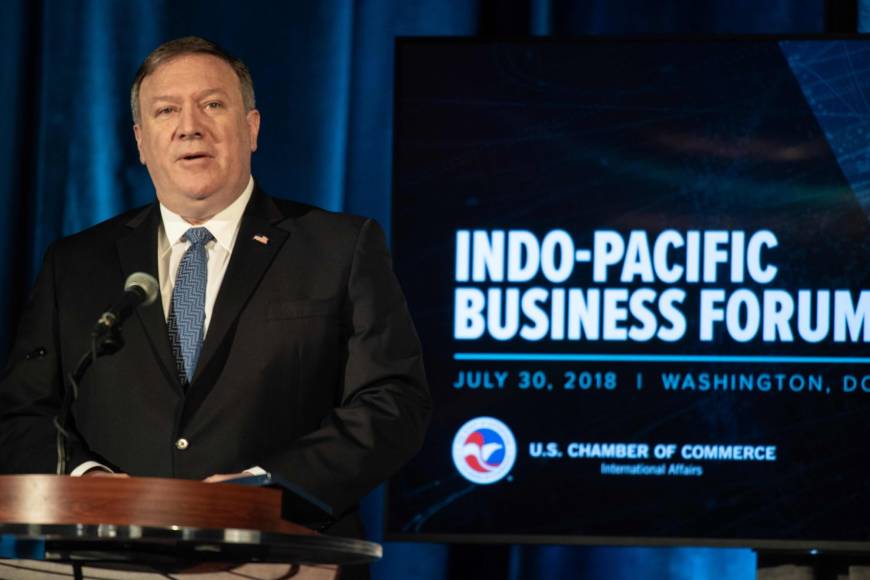 US Secretary of State Mike Pompeo addresses the Indo-Pacific Business Forum at the US Chamber of Commerce in Washington on Monday. (Photo: AFP)

Washington (People's Daily) - Before embarking on a five-day Southeastern Asia visit, US Secretary of State Mike Pompeo announced $113 million would go to new technology, energy and infrastructure initiatives in efforts to boost Asia on Monday. The announcement was made during Pompeo’s keynote address at the Indo-Pacific Business Forum at the US Chamber of Commerce.

Pompeo also said that new security assistance was forthcoming and further details would be provided during his Malaysia, Singapore and Indonesia visits later in the week.

Pompeo explained the initiatives were part of US President Donald Trump’s “Indo-Pacific” strategy aimed at building even greater mutual trust between the US and Asian countries.

As he explained, the first initiative, Digital Connectivity and Cybersecurity Partnership, will receive a $25 million initial investment to expand opportunities for US technology exports.

The third focus will include infrastructure, which the US government seeded with nearly $30 million. The US will also help establish a new interagency body and a Indo-Pacific Transaction Advisory Fund.

Though Pompeo highly praised the initiatives, analysts remain unsure if the initiatives would even work, and given Trump’s unpredictability, there’s always the chance he could change his position without notice.

Daniel Russel of the Asia Society Policy Institute and former US State Department’s top diplomat for East Asia felt the news was a bit underwhelming.

Countries in the Asian region are deeply concerned with Trump’s “America First” policies. The Trump administration withdrew from the Trans Pacific Partnership (TPP) deal once he settled in the Oval Office. Accountability and credibility regarding the new initiatives must be questioned too since Trump is still without a domestic infrastructure plan after 18 months in office.

Political observers have suggested that Democrats use the infrastructure issue as a tool to arouse voter opposition. In addition, the scope and scale of the initiatives have already received widespread criticism, since countries in the Asian region are in greater need of infrastructure upgrades, the investments would only cover a very small part of the overall problem.