WORLD US initial jobless claims dip below 400,000 for first time since pandemic

US initial jobless claims dip below 400,000 for first time since pandemic 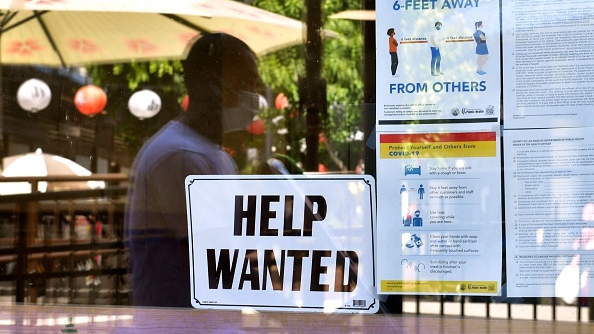 A 'Help Wanted' sign is posted beside Coronavirus safety guidelines in front of a restaurant in Los Angeles, California. (Photo: Getty Images)

Initial jobless claims in the United States dropped for a fifth straight week to 385,000, marking the first time the figure dipped below 400,000 since the COVID-19 pandemic ravaged labor market early last year, the Labor Department reported on Thursday.

In the week ending May 29, the number of Americans filing for unemployment benefits decreased by 20,000 from the previous week's downwardly revised level of 405,000, according to a report released by the department's Bureau of Labor Statistics.

The latest report also showed that the number of people continuing to collect regular state unemployment benefits in the week ending May 22 increased by 169,000 to reach 3.77 million.

Meanwhile, the total number of people claiming benefits in all programs -- state and federal combined -- for the week ending May 15 decreased by 366,178 to reach 15.4 million, as the country continues to grapple with the fallout of the pandemic.

In the past few weeks, over 20 states have announced plans to end the 300-dollar weekly federal unemployment benefits ahead of their expiration date of Sept. 6, citing labor shortage. Some states are ending the federal aid as early as June 12.

These states, all led by Republican governors, argued that enhanced unemployment benefits are encouraging laid-off workers to stay home instead of looking for jobs, leading to hiring challenges for businesses.

At a press briefing Wednesday, White House Press Secretary Jen Psaki, however, said that the assessment of the administration's economic team and many economists out there is that "issues related to the pandemic" have the largest impact on the current worker shortage, rather than supplemental unemployment benefits.

"Our view is that it's going to take time for workers to regain confidence in the safety of the workplace; reestablish childcare, school, and commuting arrangements; and finish getting vaccinated," Psaki said.

The weekly jobless claims report was released on the same day as payroll data company Automatic Data Processing (ADP) reported that private companies in the United States added 978,000 jobs in May, posting the biggest gain in 11 months.

The Labor Department's Bureau of Labor Statistics is expected to release the crucial monthly employment report on Friday, which will include employment data from both the private sector and the government.