US is urged to end probe of Middle East studies program 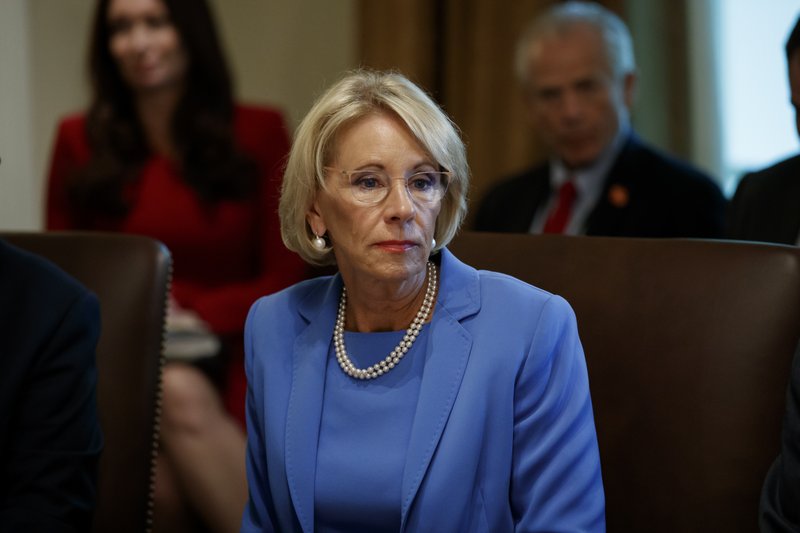 Education Secretary Betsy DeVos listens during a Cabinet meeting in the Cabinet Room of the White House in Washington. (File photo: AP)

The American Civil Liberties Union urged the Trump administration Friday to drop its investigation into a Middle East studies program the agency says has focused too much on the “positive aspects of Islam” and misused grant money to promote “ideological priorities.”

A letter from the group’s Washington office urged Education Secretary Betsy DeVos to revoke her agency’s threat to cut grant funding to the Duke-UNC Consortium for Middle East Studies unless it revises its programs.

The ACLU said the department is abusing grant rules to push its own views and is injecting the process with “the presidential administration’s long pattern of anti-Muslim bigotry and discrimination.”

Department officials did not immediately respond to the letter.

The ACLU joins a growing number of schools and scholars expressing outrage over the investigation.

The Middle East Studies Association and 18 other academic groups issued a letter Wednesday calling it an “unprecedented and counterproductive intervention into academic curricula.” It threatens the autonomy of America’s universities, they said.

The presidents of Smith College and four other Massachusetts schools also released a letter this week saying the inquiry “is setting a dangerous precedent, one that puts academic freedom at risk.”

DeVos ordered an investigation into the Middle East consortium in June after North Carolina Rep. George Holding, a Republican, relayed complaints that it had used taxpayer money to host a conference with “severe anti-Israeli bias and anti-Semitic rhetoric.”

The department’s subsequent review focused on whether the consortium was properly using a federal grant that is meant to support foreign language instruction and is awarded to dozens of universities.

In an Aug. 29 letter, the agency concluded that the consortium focused too much on cultural and historical subjects and failed to provide a “balance of perspectives” on religion.

It said many of the program’s proposed activities were “plainly unqualified for taxpayer support,” adding that the consortium offers “very little serious instruction preparing individuals to understand the geopolitical challenges to US national security and economic needs but quite a considerable emphasis on advancing ideological priorities.”

The department ordered the program to submit a revised grant proposal. The consortium received $235,000 from the grant last year, according to Education Department data.

The ACLU argues that nothing in the grant’s rules require recipients “to de-emphasize the ‘positive aspects of Islam’ to the department’s satisfaction.”

In the letter, Ronald Newman, the group’s national political director, said the inquiry could have a chilling effect at other universities that receive federal grants.

The University of North Carolina’s research chief has denied allegations of bias and said the consortium fully meets the requirements of the federal language grant.

Duke University leaders said in a message to faculty Thursday they would be vigilant in protecting academic freedom.

“We want to be very clear: No outside entity will determine what Duke faculty will teach, how they teach it, what they choose to research or write about or who can speak on our campus,” President Vincent Price wrote.

But he added that the government has the authority to decide how its funding is used, and that Duke has an “obligation to understand and abide by” the applicable rules.