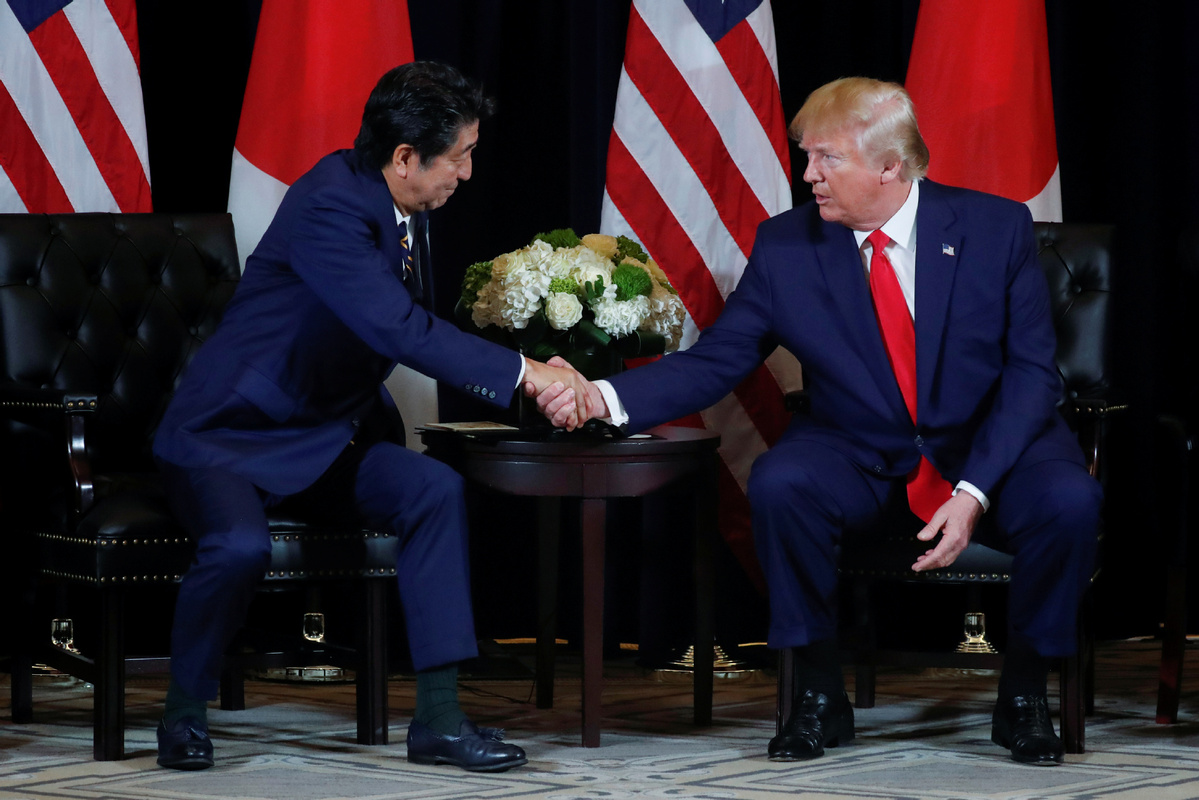 US President Donald Trump holds a bilateral meeting with Japan's Prime Minister Shinzo Abe on the sidelines of the 74th session of the United Nations General Assembly in New York City, New York, US, on Sept 25, 2019. (Photo: Agencies)

WASHINGTON, Sept. 25 (Xinhua) -- US President Donald Trump and Japanese Prime Minister Shinzo Abe announced Wednesday that the two countries have agreed to cut tariffs on agricultural and industrial products and reached an agreement on digital trade.

At the signing ceremony of the joint trade agreement on the sidelines of the annual UN General Assembly in New York, Trump told reporters that Japanese tariffs will be "significantly lower, or eliminated entirely" for US beef, pork, wheat, cheese, corn, wine, etc.

On the agricultural front, Japan has maintained that it would not commit to bigger concessions than those already made in existing free trade agreements, such as the revised Trans-Pacific Partnership (TPP) free trade pact, from which Trump withdrew in 2017.

Trump said the two sides have also reached a deal for "robust commitments" on 40 billion US dollars of digital trade between the two countries, which "will greatly expand commerce across cutting-edge products and services."

Noting that the deal will reduce long-time trade deficit with Japan, the US president hailed it as "a fair and reciprocal trade agreement."

Abe, for his part, said the outcome of the "strenuous negotiations" over the past year is a win-win solution for both countries.

The two leaders, however, did not specify whether auto tariffs, a major focal point of the negotiations, are mentioned in the agreement.

Japan has been seeking a US promise not to impose additional tariffs on Japanese vehicles and auto parts.

US Trade Representative Robert Lighthizer told reporters after the signing ceremony that cars are not part of this agreement "at this point," while indicating possible discussions in the future.

Trump said the two sides will continue negotiations on remaining areas of interest to achieve a final comprehensive agreement.