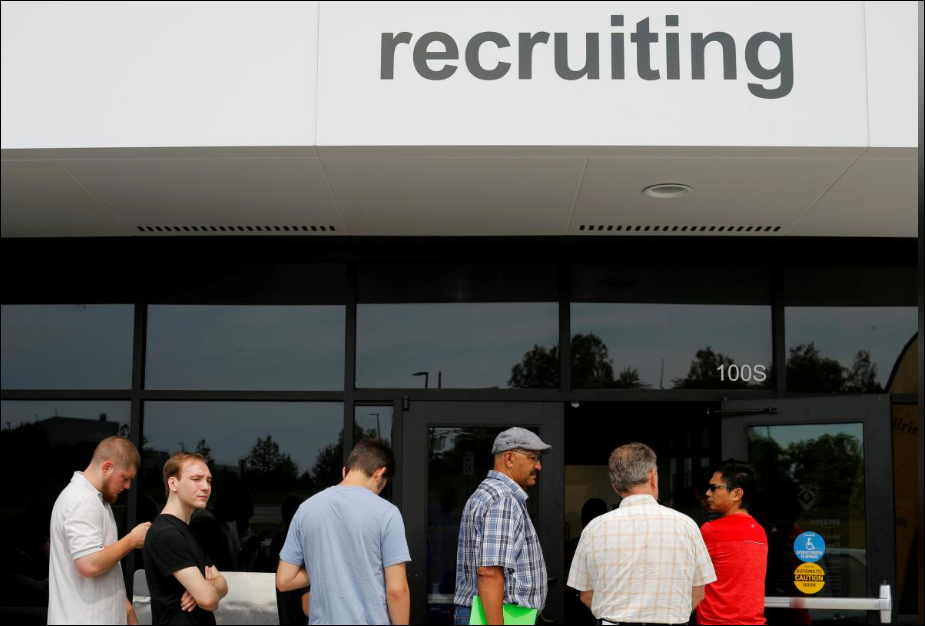 Job seekers line up to apply during "Amazon Jobs Day," a job fair being held at 10 fulfillment centers across the United States aimed at filling more than 50,000 jobs, at the Amazon.com Fulfillment Center in Fall River, Massachusetts, US, August 2, 2017. (Photo: Reuters)

US job growth accelerated in May and the unemployment rate dropped to an 18-year low of 3.8 percent, pointing to rapidly tightening labor market conditions, which could stir concerns about inflation.

The closely watched employment report released by the Labor Department on Friday also showed wages rising solidly, cementing expectations that the Federal Reserve will raise interest rates this month. The bullish report also raises the possibility that the economy could overheat.

Overall, the US economy looks strong,” said Paul Ashworth, chief economist at Capital Economics in Toronto. “In that environment, we still expect the Fed to hike interest rates an additional three times this year.”

Nonfarm payrolls increased by 223,000 jobs last month as warm weather boosted hiring at construction sites. There were also big gains in retail and leisure and hospitality payrolls. The economy created 15,000 more jobs than previously reported in March and April.

Last month’s one-tenth of a percentage point drop in the unemployment rate pushed it to a level last seen in April 2000. The jobless rate is now at a level that the Fed forecast it would be at by the end of this year.

The strong employment report added to a string of upbeat economic data, including consumer spending, industrial production and construction spending, that have suggested economic growth was regaining speed early in the second quarter after slowing at the beginning of the year.

The strength comes even as the stimulus from a $1.5 trillion income tax cut package and increased government spending is yet to filter through the economy. Renewed fears of a trade war after the Trump administration imposed tariffs on steel and aluminum imports from Canada, Mexico and the European Union, however, cast a dark cloud over the economic outlook.

Inflation is running just below the Fed’s 2.0 percent target. The US central bank increased borrowing costs in March and forecast at least two more rate hikes for this year.

After the employment report, traders increased bets that the Fed would raise interest rates four times this year. US Treasury yields rose and the dollar gained versus a basket of currencies. Stocks on Wall Street were trading higher.

Economists polled by Reuters had forecast nonfarm payrolls increasing by 188,000 jobs last month and the unemployment rate steady at 3.9 percent.

Monthly job gains have averaged about 179,000 over the last three months, more than the roughly 120,000 needed to keep up with growth in the working-age population. Though the labor market is viewed as being close to or at full employment, there is still some slack remaining.

The labor force participation rate, or the proportion of working-age Americans who have a job or are looking for one, fell to 62.7 percent last month from 62.8 percent in April. It has declined for three straight months.

Still, the labor market is getting tighter. A broader measure of unemployment, which includes people who want to work but have given up searching and those working part-time because they cannot find full-time employment, fell to 7.6 percent last month, the lowest since May 2001, from 7.8 percent in April.

There were notable shortages of truck drivers, sales personnel, carpenters, electricians, painters, and information technology professionals, the central bank said in its report published on Wednesday.

Job gains in May were across all sectors. Construction payrolls increased by 25,000 after rising by 21,000 jobs in April. Construction employment fell in March for the first time in eight months.

Manufacturers added another 18,000 jobs last month on top of the 25,000 created in April. Further gains are likely, with a survey from the Institute for Supply Management on Friday showing a pickup in factory activity in May. But some manufacturers said the steel tariffs were pushing up prices.