When the US Congress passed a pandemic aid bill on Monday, Meghan Meyer, a single mom from Lincoln, Nebraska, thought she would get some respite from the daily struggle to feed and house her two kids during an unprecedented health and economic crisis. 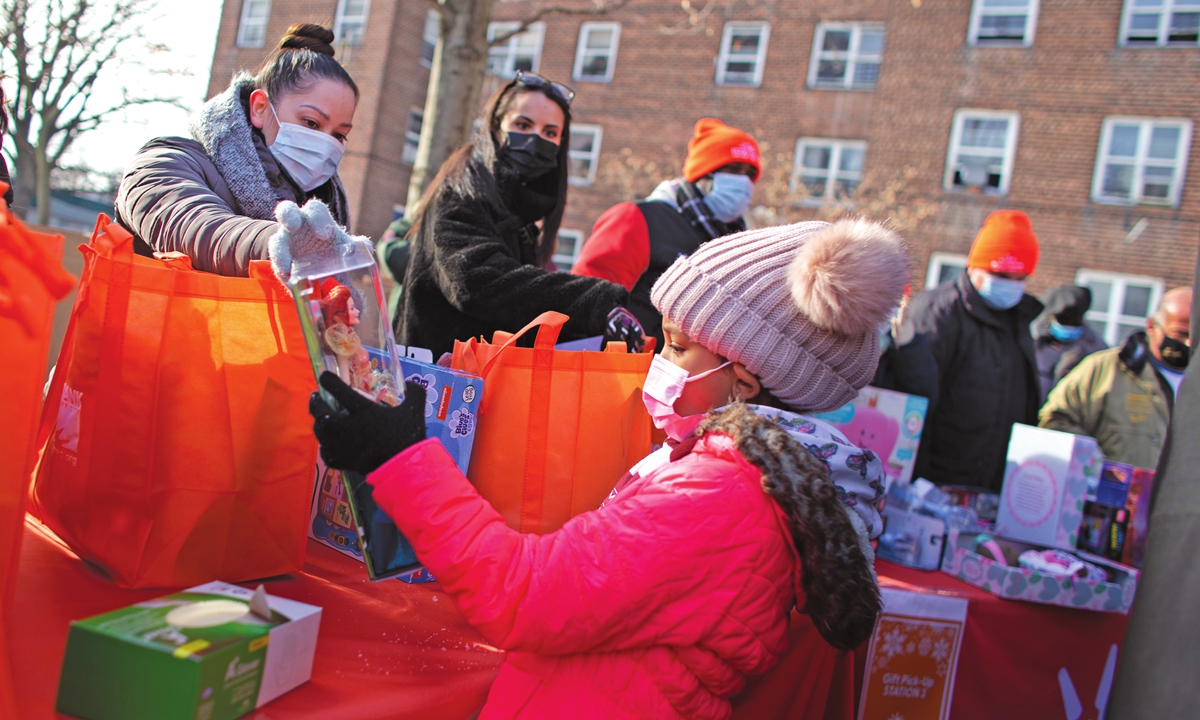 A girl receives a Christmas gift during a giveaway for people in need organized by Food Bank for New York City at Highbridge Houses in the Bronx in New York, the US, on December 19. (Photo: AFP)

But the next day President Donald Trump declared the long-awaited relief package "a disgrace" and said he would not sign it into law, decrying some of its spending measures while also demanding it include bigger stimulus checks for most Americans.

By the weekend, he had refused to budge.

That leaves Meyer, who has been on unpaid medical leave from her customer service job at retailer TJ Maxx since May because she is at risk of severe COVID-19, facing a financial cliff edge. She is one of roughly 14 million Americans whose emergency unemployment benefits, introduced by Congress when the pandemic took hold in March, ended on Saturday.

"I don't know what I'm going to do," Meyer, 39, told Reuters in a phone interview. To make it through 2020, Meyer said she has had to lean on friends and charities to help put food on the table, pay her rent, cover the family dog's medical expenses, and buy Christmas presents for her kids.

"I have held out and held out," she said.

The new relief bill would extend through mid-March programs that support self-employed workers and those unemployed for more than half a year. It also gives an additional $300 a week through mid-March to all those receiving jobless benefits, some 20.3 million people. And it extends through January a moratorium on evictions due to expire on December 31 and provides $25 billion in emergency rental assistance.

Many economists agree that the aid is insufficient and more will be needed after Democratic President-elect Joe Biden takes office on January 20. Biden has called the bill a "downpayment."

Negotiated by Trump's own Treasury secretary, Steven Mnuchin, and the Republican Party's congressional leaders, the bill has been flown to the president's Florida beach resort where he is staying for the holiday, awaiting his possible signature. In tweets on Saturday, Trump signaled he was still unwilling to sign the bill, despite pleas from lawmakers to show goodwill at Christmas time.

"I simply want to get our great people $2000, rather than the measly $600," he tweeted Saturday, referring to the bill's stimulus checks, while he also continued to rail about the November election as he made baseless claims about election fraud.

Trump had not criticized the aid package's terms before it went before the House of Representatives and the Senate for a vote.

As pandemic lockdowns hammered the economy in March, Congress rushed through emergency unemployment benefits as part of the $2 trillion CARES Act. At the time, lawmakers did not envisage the aid would be needed beyond Christmas and, until last weekend, they could not reach a deal to extend the benefits.

Meyer, like others, has watched her benefits dwindle over the past six months after a CARES program that gave her $600 a week in supplemental jobless payments expired in July and she went on to exhaust her allowance of Pandemic Emergency Unemployment Compensation.

That left her with extended benefits of just $154 a week up until Saturday, which would increase to $454 if Trump relents and signs the bill. If he doesn't, Meyer will get nothing.

"It's the difference between whether we have enough groceries or not, whether I can pay my car insurance, whether I can have gas to go to a food bank," she said.

Meyer said she voted for Trump in 2016 but was quickly turned off by his behavior in office, and described his opposition to the relief package as "mean-spirited."

US job growth has slowed after an initial rebound when stay-at-home orders were lifted over the summer, and a new wave of coronavirus infections now threatens to dent the recovery.

Andrew Stettner, a senior fellow at nonpartisan think tank The Century Foundation, said delaying relief will slow the recovery even if most Americans are vaccinated and life returns to normal in 2021.

"If you don't have this money circulating in the economy, it's going to squeeze things," Stettner said.

Like Meyer, most people who are no longer eligible for federal unemployment benefits will be left with no income at all, as most states offer meager assistance, he said.

About 9 million Americans who would not normally qualify for unemployment insurance, including the self-employed and gig workers, were receiving Pandemic Unemployment Assistance (PUA) until it expired along with other CARES programs on Saturday, Stettner said.

Among those is artist Marji Rawson, 54, of Ann Arbor, Michigan, who in a normal year would run a booth at art festivals across the country. Those festivals may not return until June, but Rawson from Saturday will lose about $150 a week in PUA that she has relied on throughout the pandemic.

"As if this world isn't full of anxiety already, now we have this on top of it," said Rawson.