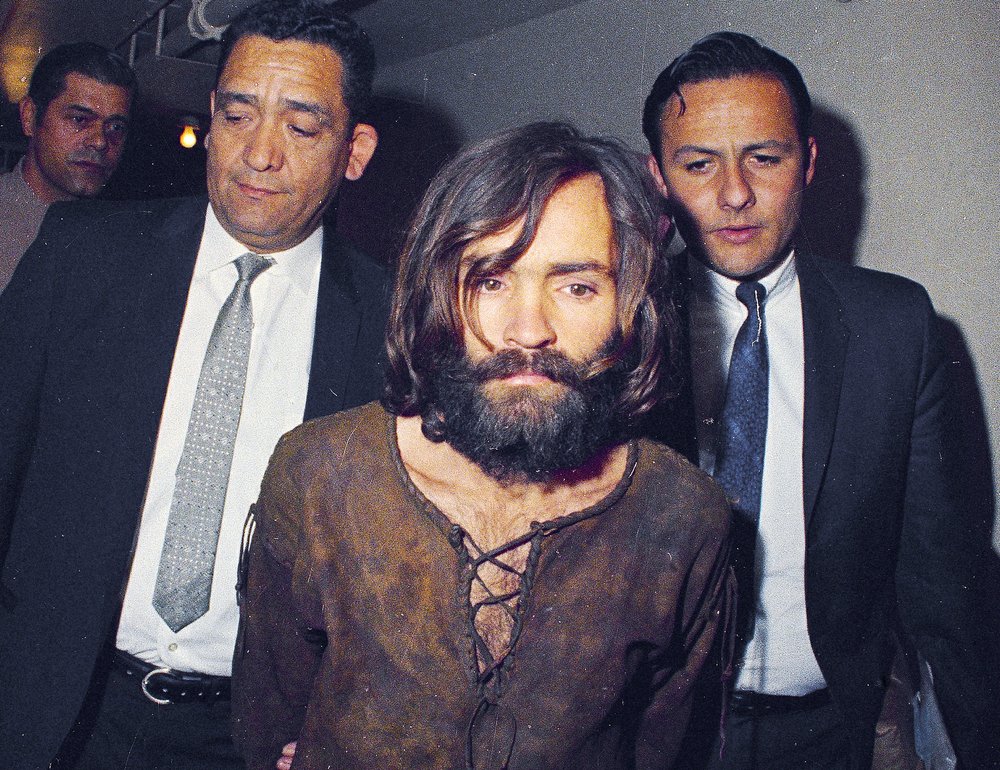 In this 1969 file photo, Charles Manson is escorted to his arraignment on conspiracy-murder charges in connection with the Sharon Tate murder case in Los Angeles. (Photo: AP)

Following a seven-month trial, Charles Manson and three of his followers were convicted of murder and conspiracy in the August 1969 killings of actress Sharon Tate and six others.

The Associated Press is republishing the following article on the verdicts to mark the anniversaryof the killings. It first appeared on Jan. 26, 1971.

Charles Manson, shaggy leader of a cult-like clan of hippie types, was convicted Monday of first-degree murder and conspiracy along with three women followers in the savage slayings of actress Sharon Tate and six others.

The state said it will ask the death penalty for all.

The defendants, who staged wild outbursts during their seven-month trial, sat passively as verdicts were returned on the 27 counts against them.

After jurors were polled, Manson muttered audibly, referring to them: “I think they’re all guilty.” After the verdicts were all in, he shouted at the judge: “We’re still not allowed to put on a defense. You won’t outlive that, old man.”

The jury of seven men and five women, who had deliberated 42 hours and 40 minutes since receiving the case Jan.16, was ordered to return to court at 9 a.m. Thursday for the penalty-phase of the trial. They will continue to be sequestered.

The prosecutor said he has about 50 witnesses ready for the penalty trial. The defense has said it will put on a case as long or longer than the state’s, seeking life imprisonment instead of the death penalty on the contention there still is doubt as to guilt.

Death or life imprisonment are the only possible verdicts for convictions on first-degree murder.

Under California law the same jury that returns a first-degree murder-conspiracy conviction must meet again at a second trial to fix the penalty.

The defendants were charged with murder-conspiracy in the August 1969 slayings of the beautiful actress and four visitors to her mansion, and in the killings a night later of a wealthy merchant couple.

Manson, 36, was accused of ordering the killings to touch off a race war he believed was heralded in a Beatles song, after which he expected to take over power.

The other defendants were Susan Atkins, 22, Patricia Krenwinkel, 23, and Leslie Van Houten, 21.

Miss Van Houten was charged with conspiracy in all the killings, but with murder only in those of market owners Leno and Rosemary LaBianca.

The defendants, banished from court Dec. 22 for shouting, filed in smiling and chatting. The women wore prison uniforms with ribbons in their long hair. Manson wore a rumpled white shirt with a blue scarf. His hair was disheveled, and he sported a new goatee.

All arose and walked out quietly after the verdicts — read one by one for each of the 27 counts — were finished. A score of sheriff’s deputies was in the packed 92-seat courtroom to maintain order.

Deputy Dist. Atty. Vincent Bugliosi, the chief prosecutor, told newsmen he will seek the death penalty: “I don’t enjoy it, but it is necessary.”

Of the verdict, he said: “I am very, very pleased, and the Los Angeles Police Department is very happy. We expected the verdict, but until the clerk reads the verdict you don’t know.”

The deciding factor? “The overwhelming amount of evidence.”

Chief defense counsel Paul Fitzgerald, said the defendants told him Monday night they “expected the worst.” He described the verdict as anticipated.

“We lost the case when we lost our change of venue. We thought we had as much chance to win the case in Los Angeles as they had of winning the Sam Sheppard,” he said, referring to a Cleveland doctor convicted in the 1960s of slaying his wife in a sensational case. The Supreme Court ultimately overturned the conviction.

Fitzgerald said the defense would argue at the penalty trial that pretrial publicity hurt the defendants. He said he will plead for a sentence of life imprisonment on grounds there is still some doubt as to guilt.

Maxwell Keith, representing Miss Van Houten, said he had felt she had a fighting chance if not for acquittal, for second-degree murder: Miss Van Houten was not a member of the killer party at the Tate home.

“She reacted a lot better than I did,” he said of the verdict. “She didn’t turn a hair. She seemed more solicitous of me.”

Manson’s attorney, Irving Kanarek, declined to comment on the verdict.

The verdict capped a trial in which the state called 84 witnesses, and the defense rested without putting on a case. The transcript ran nearly 6 million words, and there were 297 exhibits.

The prosecutor in final arguments called the killings “monstrous, macabre and nightmarish ... perhaps the most inhuman horror-filled hour of savage murder and human slaughter in the annals of recorded crime.”

He called Manson “someone with a sick and morbid lust and preoccupation with death.” The women, he said, were Manson’s “robots and zombies.”

The defense argued that someone other than the defendants might have done the killings. Attorneys said Manson was being prosecuted for his unpopular lifestyle, and that if the women were really robots, they couldn’t perform the premeditation needed for first-degree murder.

The case first made headlines Aug. 10, 1969, when a maid found the bloody bodies of victims at the Tate estate.

The eight-months-pregnant honey blond actress, 25, wife of director Roman Polanski, lay stabbed on the living room floor near the body of Jay Sebring, 26, Hollywood hairstylist and her onetime fiancé.

Outside were the bodies of Polish playboy Wojciech Frykowski, 37, and his girlfriend, coffee heiress Abigail Folger, 26. Slain in his car was Stephen Parent, 18, shot as he left after visiting the caretaker.

“PIG” was smeared in blood on the door. A towel “hood” covered Sebring’s head. Police called the slayings “ritualistic.”

The next day, a few miles away, the LaBiancas were found stabbed to death amid bloody scrawlings.

For four months police were baffled. Then, acting on a tip from a woman who said Miss Atkins told of the killings while the two shared a jail cell, police made mass arrests of Manson and his family, then living in a remote commune near Death Valley.

Manson, only 5 feet 6 but with what his followers called near-hypnotic powers, quickly emerged as the central figure. The son of a prostitute and habitué of prisons and institutions most of his life, he had formed his “family” in San Francisco’s hippie district and come to the Hollywood area to seek a singing career. Family members called him “God” and “Jesus” and “Satan”.

A onetime clan member, Linda Kasabian, star state witness at the trial, said Manson sent out two killer parties to the Tate and LaBianca homes, ordering the second set of killings because the first were “too messy.”

Mrs. Kasabian, granted immunity from prosecution for her story, said Manson went along himself on the LaBianca trip but left before the actual killings. In 19 days on the stand, she told of seeing two killings and of hearing screams of other victims.

In Milford, New Hampshire, Mrs. Kasabian said of the verdict: “I’m not surprised, but my heart really grieves for them.”

Other witnesses said Miss Atkins admitted killing Miss Tate after the latter pleaded to live and have her baby, then tasting her blood and finding it “beautiful.”

Witnesses said Miss Krenwinkel complained that her hand hurt after the Tate killings because she had stabbed so much, and that Miss Van Houten repeatedly stabbed a body that was already dead, and enjoyed it.

When the defense’s turn came, attorneys surprised the court by resting. They said that if the women defendants were allowed to testify, they would tell stories that would incriminate themselves and clear Manson. The attorney said they would not allow this.

Manson testified in the jury’s absence and said he’d killed no one and ordered no one killed.

In a rumbling discourse he explained his lifestyle and said of women: “These children who come at you with knives, they’re your children. I didn’t teach them. You did.”

He told the women not to testify and declined to repeat his story for jurors.

Trial highlights included frequent shouts and songs from defendants that got them banished to nearby detention rooms, where they listened via loudspeaker. Manson lunged once at the judge. Attorneys were jailed for contempt. One attorney vanished on a camping trip and had to be replaced.

Through it all, a band of loyal Manson clan women maintained a vigil in the street outside the Hall of Justice, waiting for their “father” to be freed from “the tower.”

Manson and Miss Atkins still face murder charges in the 1969 killing of Malibu musician Gary Hinman. Manson also is charged with murdering Donald “Shorty” Shea, a hand who vanished from the clan’s movie ranch commune. His body has not been found.