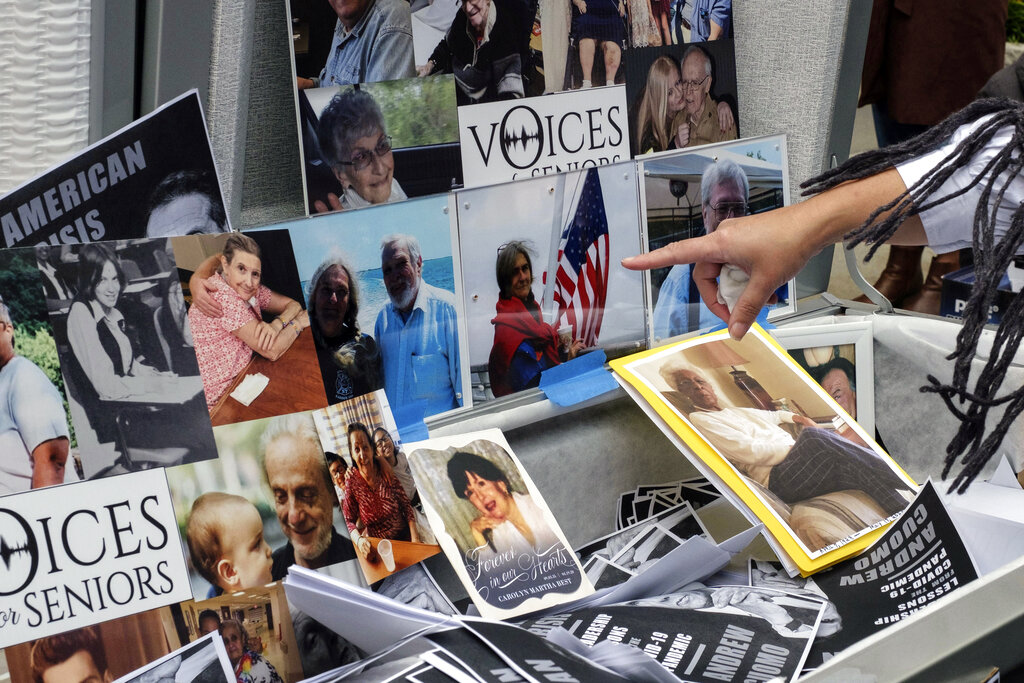 In this Oct. 18, 2020, file photo, families of COVID-19 victims who died in New York nursing homes gather in front of Cobble Hill Heath Center in the Brooklyn borough of New York, to demand New York Gov. Andrew Cuomo apologize for his response to clusters in nursing homes during the pandemic. (Photo: AP)

The demand ratchets up pressure on Democratic Gov. Andrew Cuomo after months of bipartisan criticism that the state’s official tally of 6,722 dead at long-term care facilities is probably off by thousands. That's because New York, unlike nearly every other state, counts only residents who died on a nursing home’s property and not those who died after being taken to a hospital.

Cuomo's administration has repeatedly refused to release such nursing home data to lawmakers and the media, including a public-records request from The Associated Press dating back to May.

His spokesman, Rich Azzopardi, called the Justice Department's latest request just days before the presidential election a politically motivated “sham” and a “scummy abuse of power.”

An AP analysis in August found New York is probably undercounting nursing home deaths by thousands, noting that a separate federal count since May that included resident deaths in hospitals was 65 percent higher than the comparable state count.

Cuomo, who has generally been praised for flattening the curve in a state hit with a nation-topping 33,400 deaths, has nonetheless faced unrelenting criticism over his handling of nursing homes, particularly a controversial March 25 order that sent thousands of recovering COVID-19 patients from hospitals into nursing homes at the height of the pandemic.

New York's method of counting allows Cuomo to boast that his state has a lower percentage of nursing home deaths compared to other states.

“In this hyper-political environment ... everybody wants to point fingers,” Cuomo said in an appearance on CBS’ “This Morning” earlier this month to promote his new book on his handling of the crisis. “New York, actually, we’re number 46 out of 50 in terms of percentage of deaths in nursing homes — 46 out of 50. So, yes, people died in nursing homes. Yes, we’ve learned a lot of lessons, but 46 out of 50, it’s not a predominantly New York problem."

The letter from the Justice Department’s civil rights division asks the state to hand over a breakout of hospital deaths that its health department has been collecting since at least April but not made public. It broadens to more than 600 nursing homes a similar request it made in August that was aimed only at a few dozen publicly run facilities.

The same data was promised to state lawmakers at a fiery forum in August in which some members of Cuomo’s own party accused him of a cover-up. They are still waiting.

Asked about the delay Wednesday, the state health department repeated what it has been saying for months, that it needs more time to doublecheck the figures for accuracy.

Assemblyman Ronald Kim, a Democrat from an area of New York City where hundreds of nursing home residents have died, said he welcomes the federal inquiry and hopes it gets results.

“This is a necessary step ... for families to get a sense of closure from the traumatic experience that they had to go through," he said.

Vivian Zayas, whose 78-year-old mother died in April after contracting COVID-19 at a nursing home in West Islip, New York, said the delay was unacceptable.

“We’re really hurt and we don’t have to add to people’s pain by them being elusive,” said Zayas, who founded the advocacy group Voices for Seniors after her mother’s death. “We believe the numbers are so significantly higher and they’re trying to find ways of massaging the numbers so they don’t reflect the devastation.”

Separately, the Justice Department also sent a letter to Democratic Gov. Phil Murphy of New Jersey questioning its nursing home death count and announced it is launching a formal investigation of the state's veterans homes after receiving what it described as incomplete answers to an earlier request for data.

The Murphy administration wouldn’t comment on the substance of the investigation but called the new inquiries politically motivated.

Said spokesman Michael Zhadanovsky: “The fact that this request from the Department of Justice was announced a week before Election Day speaks volumes about the nature of the review.”