US lashes out at Iran as world leaders gather at UN 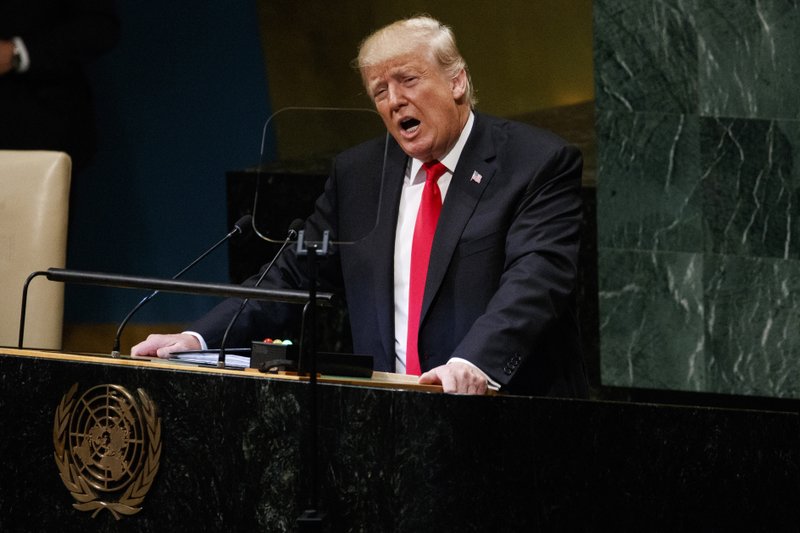 President Donald Trump and his top national security aides lashed out at Iran with unusual venom Tuesday, warning Tehran that it faced severe consequences if it defied the United States.

Speeches by the president before the UN General Assembly and by Secretary of State Mike Pompeo and national security adviser John Bolton at a New York City hotel marked an escalation of rhetoric.

Trump blasted what he called Iran’s “corrupt dictatorship” and accused its leaders of enriching themselves through embezzlement and raiding state coffers to spread “mayhem.”

Bolton, speaking to an organization that opposed the 2015 nuclear deal with Iran, from which the administration withdrew in May, warned that there would be “hell to pay” if Tehran crossed the US, its allies or their partners.

Trump also vowed to continue to isolate Iran through US sanctions that are being re-instated following his withdrawal from the 2015 nuclear deal. The next round of sanctions will take effect in early November.

He later predicted that the pressure from renewed sanctions would force Iran back to the table to negotiate.

“Iran’s leaders sow chaos, death and destruction,” the president told the UN General Assembly in a 34-minute speech that was more critical of Iran than any other country. “They do not respect their neighbors or borders or the sovereign rights of nations. Instead Iran’s leaders plunder the nation’s resources to enrich themselves and to spread mayhem across the Middle East and far beyond.”

In an even more fiery speech to a group opposed to the Iran deal, Bolton was to go further.

“If you cross us, our allies, or our partners; if you harm our citizens; if you continue to lie, cheat and deceive, yes, there will indeed be hell to pay,” he was to say according to prepared remarks released by the White House.

“The murderous regime and its supporters will face significant consequences if they do not change their behavior. Let my message today be clear: We are watching, and we will come after you,” Bolton was to say,

Pompeo also spoke at the event hosted by United Against a Nuclear Iran, being held to coincide with UN General Assembly.

In his speech, Pompeo unveiled a long list of Iranian misdeeds, from its support of Syrian President Bashar Assad and Houthi rebels in Yemen to sponsoring or plotting attempted terrorist attacks in Africa, Asia, Europe and beyond.

“It is truly an outlaw regime,” he said. “There can be no question Iranian destructive activities are truly global in scope. It is therefore incumbent on every country to join our efforts to change the regime’s lawless behavior. The ongoing, multi-national, multi-continental nature of Iranian malign activity leaves no room for inaction or indecision.”

Iranian President Hassan Rouhani, who also addressed the UN, launched a scathing attack on Trump and his administration for abandoning international norms and imposing sanctions that amount to “economic terrorism.” He accused the United States on Tuesday of trying to overthrow his government.

“The United States’ understanding of international relations is authoritarian,” Rouhani said. “In its estimation, might makes right. Its understanding of power, not of legal and legitimate authority, is reflected in bullying and imposition.”

Trump and his aides, meanwhile, stepped up their attacks on the nuclear deal, which was a signature foreign policy achievement of the Obama administration. Trump called it “horrible” and maintained that many Middle Eastern countries had supported the decision to withdraw. In fact, only Israel and Gulf Arab nations such as Saudi Arabia and the United Arab Emirates enthusiastically backed the move.

The other parties to the deal, under which Iran agreed to curbs on its nuclear program in exchange for sanctions relief, remain in the agreement and met Monday in New York to reaffirm their support for it. Aside from Iran, the other participants are Britain, China, France, Germany, Russia and the European Union.

After that meeting, the top diplomats from those countries and the EU agreed to establish a financial facility in the European Union to facilitate payments for Iranian imports and exports including oil, a key move sought by Tehran as it attempts to fight back against the re-imposed US sanctions. They said in a joint statement that the so-called “Special Purpose Vehicle” will “assist and reassure economic operators pursuing legitimate business with Iran.”

Pompeo harshly criticized those countries for attempting to subvert US sanctions.

“This is one of the most counterproductive measures imaginable for regional and global peace and security,” he said. “By sustaining revenues to the regime, you are solidifying Iran’s ranking as the number one state sponsor of terror, enabling Iran’s violent export of revolution and making the regime even richer while the Iranian people scrape by.”

In his speech, Trump said the deal was a “windfall” for Iran’s leaders, who used billions in sanctions relief to boost their military budget, increase repression, fund terrorism, havoc and slaughter in Syria and Yemen and enrich themselves.

His comments on embezzlement by Iranian authorities come after Rouhani’s government publicized details of the country’s budget for the first time. That budget revealed large increases in funding for religious foundations that are a key part of the clerical state-above-the-state, which receive hundreds of millions of dollars each year from the public coffers.