On tracing COVID-19 origins, the US government has been making groundless accusations targeting China based on speculation and disinformation, but never on science and facts. The virus origins tracing mission in the US has been led by intelligence departments, which have a notorious record of creating disinformation for politicization purposes, and most of the rumors concocted by the US surround the Wuhan Institute of Virology (WIV).

Focusing on the rumors and those who are behind the defamation campaign, the Global Times shall publish two in-depth reports on Wednesday and Thursday to expose the lowdown tricks employed in the West' COVID-19 origins campaign. 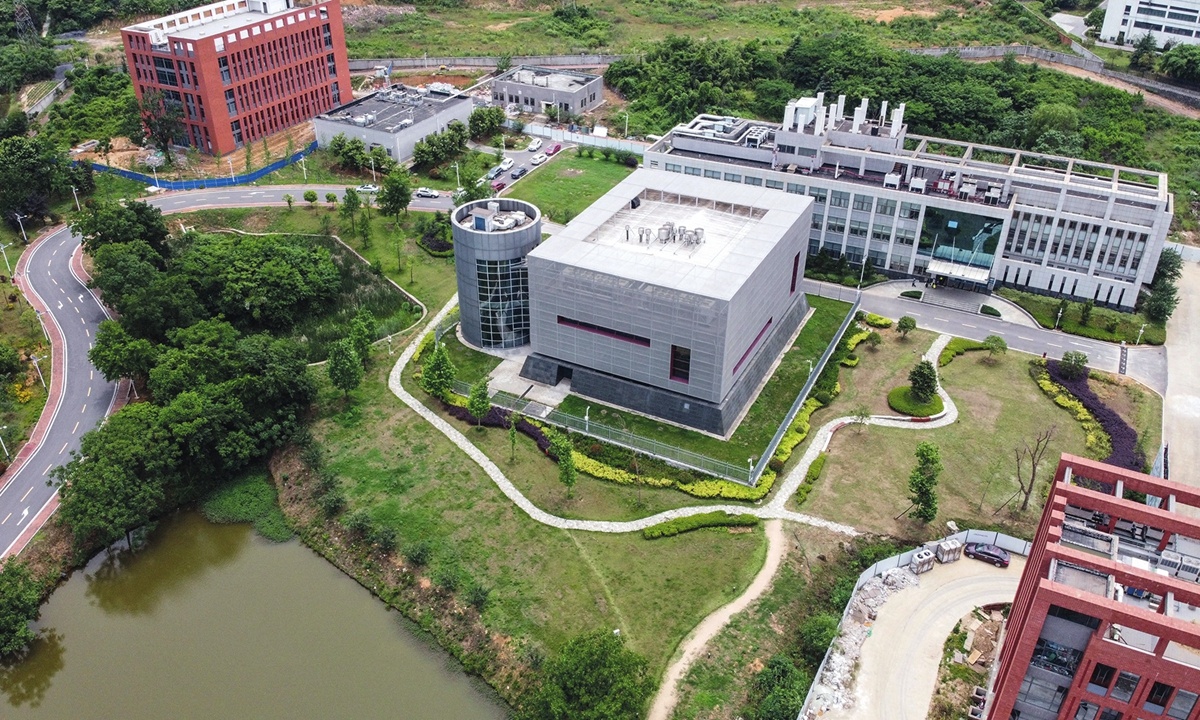 An aerial view of the P4 laboratory (C) in the Wuhan Institute of Virology (Photo: AFP)

The groundless claims by Western politicians and media surrounding the Wuhan Institute of Virology have frequently been disproved by scientists from across the world. In a recent critical review published in the peer-reviewed journal Cell on August 18, 21 renowned international experts once again presented evidence that the scenario of SARS-CoV-2 having been first passed from an animal to a human is much more probable than the disease originating from the Wuhan lab.

The discussion over the origins of the pandemic has become politicized and heated, said Stephen Goldstein, author of the Cell article and evolutionary virologist at University of Utah. "We felt the time was right to take a critical look at all of the available evidence," Goldstein noted, according to a press release published on the university's website on August 19.

It's a pity that some Western countries led by the US remain busy politicizing the pandemic and slandering China with the "lab-leak theory," while ignoring their severe domestic situation, said Yang Zhanqiu, a virologist from Wuhan University. The COVID-19 origins tracing is a rational scientific issue, which "should be decided by scientists instead of politicians," Yang told the Global Times.

Rumors from the US targeting the WIV labs have been circulating since the beginning of the pandemic, trying to portray this Chinese research institution as "the root of all evil."

What are the main rumors spread about the WIV? Who are behind the conspiracy theories? The Global Times listed the following typical COVID-19-related misinformatio in chronological order, which have all been disproved by international authoritative scientists and the Chinese government.

The claim that "SARS-CoV-2 was made or artificially synthesized by the WIV" first emerged in early 2020.

In an article published on January 26, 2020, three days after Wuhan announced a city-wide lockdown, American conservative newspaper the Washington Times quoted Dany Shoham, "a former Israeli military intelligence officer who has studied Chinese biological warfare," as saying that COVID-19 was probably leaked from the WIV, and was possibly "included in China's biological weapons program."

Following the Washington Times' groundless article, the US started a conspiracy theory war against WIV, with an increasing number of anti-China politicians and media, who might have neither known about the COVID-19 nor WIV, pointing fingers at China for "making the virus."

Republican Senator Tom Cotton echoed the engineered-bioweapon hypothesis in the same month. "I would note that Wuhan has China's only biosafety level-four super laboratory that works with the world's most deadly pathogens to include, yes, coronavirus," Cotton hinted at a Senate Armed Services Committee hearing on January 30, 2020.

Then Chinese Ambassador to the US Cui Tiankai criticized Cotton's remark as "absolutely crazy." Cotton's ridiculous bioweapon assertion was soon refuted by 27 leading medical experts from eight different countries, who published a joint statement in The Lancet on February 29 and indicated that scientists from multiple countries have published and analyzed the genomes of SARS-CoV-2, and they overwhelmingly conclude that this coronavirus disease originated in wildlife, as have so many other emerging pathogens.

The Wuhan P4 Laboratory is a government cooperation program between China and France, with its design, construction, and management all following international standards, and operations are protected by special facilities and strict protocols. "There is... no factual evidence corroborating recent reports in the US press linking the origins of COVID-19 and the work of the P4 laboratory of Wuhan," an official at French President Emmanuel Macron's office said in April 2020, France24 reported. 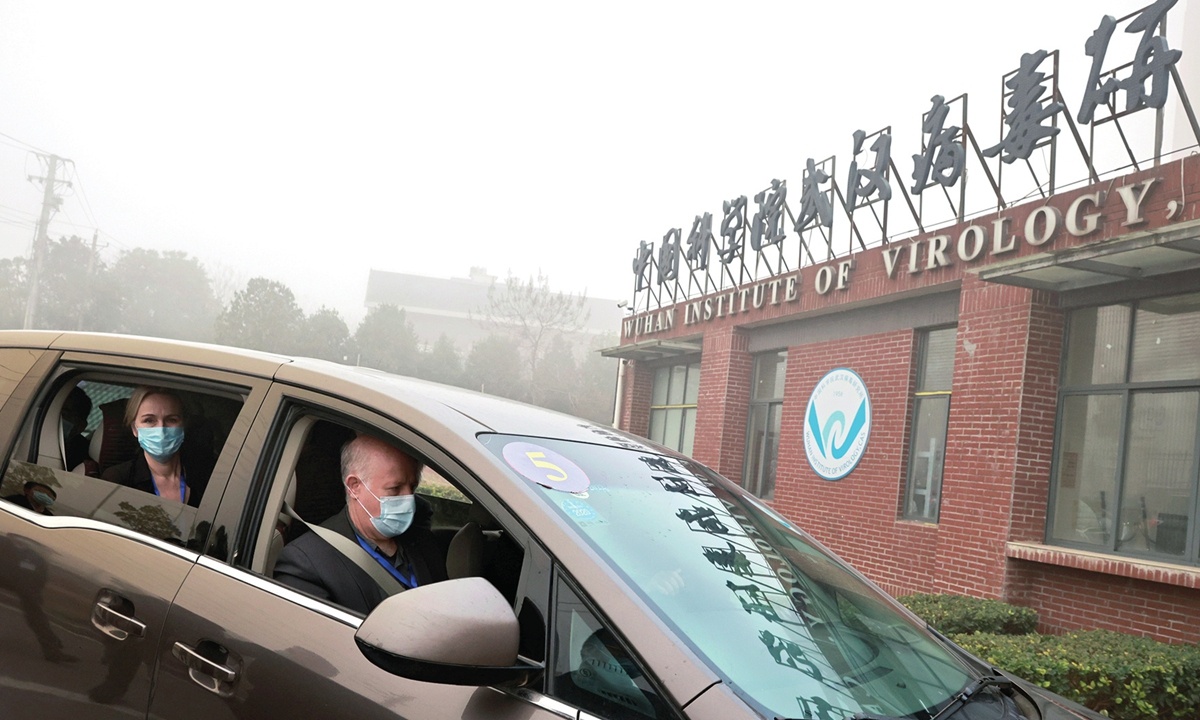 Members of the World Health Organization team tasked with investigating the origins of the COVID-19, arrive at Wuhan Institute of Virology on February 3, 2021. (Photo: IC)

British tabloid The Sun said in an April 2020 article that the WIV lab "lied about taking safety precautions when collecting bat samples," attacking the WIV for having lax bio-security standards.

In an "exclusively revelation" report on April 29, 2020, The Sun showed a few photos and video screenshots of "WIV researchers" "catching bats in the wild," in support of its claim that "incredibly some [Chinese] scientists didn't even wear gloves as they entered caves to collect fecal bat swab samples, beaming for the camera, and oblivious to the dangers."

In the article, The Sun interviewed Matthew Henderson, director of the Asia Studies Centre at the Henry Jackson Society, which firstly published the photos and video online. "There is ample evidence of such a cavalier approach to biosecurity by Chinese scientists based in Wuhan laboratories," Henderson said.

The accusation was soon proven laughably false. The video clip and photos hyped by a few British organizations and media had little to do with the WIV. They had actually come from the fourth episode of a popular science documentary named Wild Youth, "and the people involved are not from the Wuhan lab," said Chinese Foreign Ministry spokesperson Hua Chunying at a press conference in May 2020.

The video clip does not involve any staff member from the Wuhan lab nor their scientific research activities, Hua stressed.

Some of the photos British media published turned out to have been taken in the summer of 2007 in South China's Hainan Province, Hua added.

"We're not new to this kind of graft. We have seen it on issues related to the Xinjiang Uygur Autonomous Region and Hong Kong Special Administrative Region. Do we have more effective ways to deal with these kinds of lies? Can we sue them?" asked Hua.

In an interview with Reuters, Yuan Zhimin, director of the Wuhan National Biosafety Laboratory, rejected theories that the lab had accidentally released the coronavirus disease it had harvested from bats for research purposes, saying the lab's bio-security procedures were strictly enforced.

"High-level bio-safety labs have sophisticated protective facilities and strict measures to ensure the safety of laboratory staff and protect the environment from contamination," Yuan said. 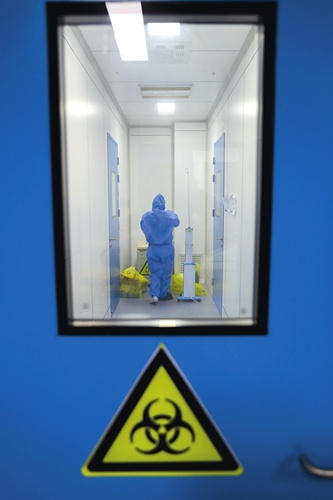 The P2 laboratory at the Wuhan Centre for Disease Control and Prevention on February 4, 2020. (Photo: cnsphoto)

In May 2020, right-wing Australian tabloid the Daily Telegraph published an article, in which the author, Sharri Markson, claimed that she had exclusive access to a 15-page "China dossier" showing "China deliberately covered up evidence of the virus [COVID-19] early on in a pure case of negligence."

In the article, Markson depicted the source in a vague, misleading, and mysterious way, saying it was compiled by the so-called "Five Eyes" intelligence alliance. But the so-called dossier was found by several news outlets as just a research report based on publicly available information, including news reports.

The "dossier" was actually a summary of publicly available material authored by the US State Department, no more than a "reading list" or "reference paper," The Guardian reported on May 26, 2020. Markson's unprofessional conduct "should be utterly humiliating to the Murdoch media, except that the Murdoch media has zero shame," it quoted the former Australian Prime Minister Kevin Rudd as saying.

However, Markson dismissed the mainstream media's criticism of her work on the origin of the virus and claimed to have been savaged by the left-wing Australian media.

Markson is infamous for her lack of credibility. During the pandemic she has co-signed lots of fake news attacking the WIV with hearsay and fake "experts" or "insiders."

Markson has two close partners; Robert Potter, a so-called "network security specialist," and Christopher Balding, "a China observer." Both of them appeared regularly on Markson's show, accepting her interviews, endorsing the so-called "intelligence" documents, and becoming the "exclusive sources" of her reports.

From May to September 2020, Potter and Balding relentlessly told the same story in the media, including in The Australian, on Sky News Australia, and in The Sun in the UK, to spread the rumor. But they failed to provide any evidence about "data obtained from the database," so even Western media themselves were reluctant to hype this topic further.

In an article published on May 23, 2021, the Wall Street Journal (WSJ) said it had heard from "a previously undisclosed US intelligence report" that three researchers from the WIV "became sick enough in November 2019 that they sought hospital care." The three had symptoms consistent with "both COVID-19 and common seasonal illnesses," it said.

Three days later, President Biden said he had directed the US intelligence community to further investigate the origins of the COVID-19 pandemic and "report back to him in 90 days," according to CNN.

The WSJ article on "sick staff at the WIV" is an outright lie that came from nowhere, Yuan later refuted. "I've read it. It's a complete lie," Yuan told the Global Times on May 24. "Those claims are groundless. The lab has never been aware of this situation [sick researchers in autumn 2019], and I don't even know where such information came from."

Earlier, Chinese health authorities said on March 31 that the WIV had found three adult COVID-19 cases during its retrospective screening of flu samples collected in Wuhan between January 2019 and January 2020. The three cases were not WIV staffers, but patients being treated at a local hospital that the WIV worked with. Moreover, the three patients had symptoms in January 2020 rather than "November 2019" as some US media claimed.

Nonetheless, audiences may not be surprised to find that the first author of the WSJ fake news report is Michael R. Gordon, who is notorious for co-authoring an article in September 2002, falsely asserting that Iraqi President Saddam Hussein was seeking to build a nuclear weapon.

Gordon's article became an excuse for the-then US administration to attack Iraq. Over the subsequent decade and a half, Gordon continued to "serve as a conduit for fabricated 'intelligence' emanating from the White House, the Pentagon, and the CIA," organization World Socialist Web Site said in an article published in June.