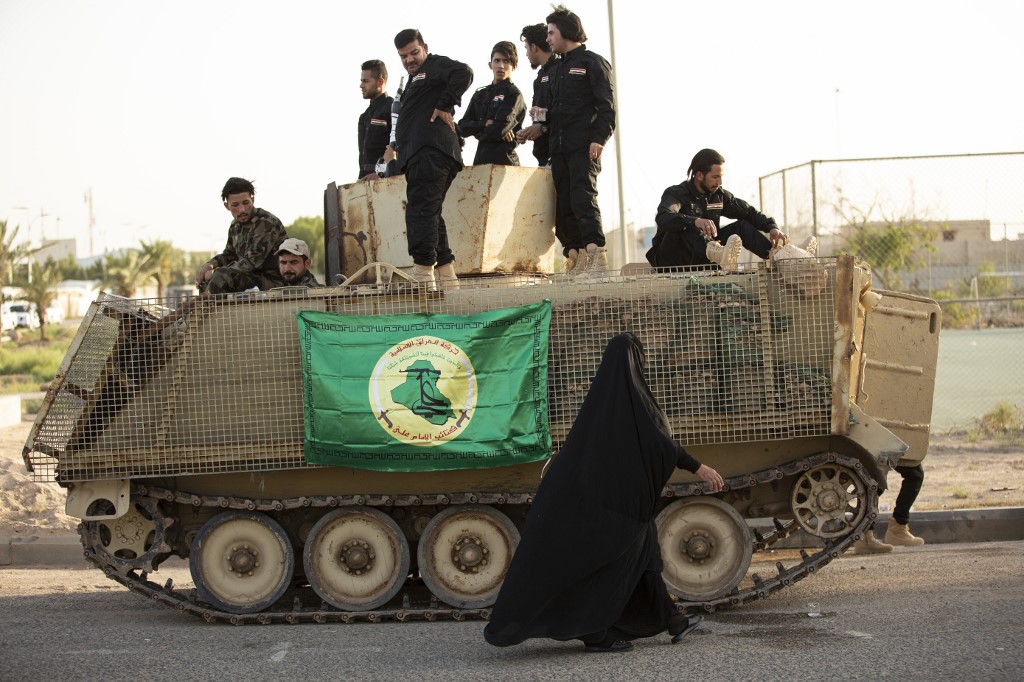 A woman walks past members of the Hashed al-Shaabi (Popular Mobilisation) paramilitary force taking part in a military parade in the southern Iraqi city of Basra on June 14, 2020, (Photo: AFP)

BAGHDAD, Aug. 16 (Xinhua) -- The U.S.-led international coalition forces, tasked with fighting the Islamic State (IS) militant group, on Sunday handed over the largest site of ammunition depots in the north of Baghdad to Iraqi forces, the official Iraqi news agency reported.

During a handover ceremony in al-Taji Camp, some 20 km north of Baghdad, up to 50 ammunition depots and related facilities were handed over to the Iraqi side, the Iraqi News Agency (INA) said.

The handover of "the primary ammunition depots site, that supports the operations of the Iraqi security forces and the international coalition against IS, was planned for a long time in coordination with the Iraqi government," the agency said, according to a coalition document obtained by INA.

The international coalition will continue to keep a smaller presence in al-Taji Camp to coordinate the logistical and security operations with the Iraqi forces, the INA said.

Al-Taji Camp is a huge military base containing an air base where some U.S. troops are stationed.

Earlier, the international coalition forces handed over several military sites to the Iraqi security forces in central and northern the country.

The relation between Baghdad and Washington has witnessed a tension since Jan. 3 after a U.S. drone struck a convoy at Baghdad airport, which killed Qassem Soleimani, former commander of the Quds Force of Iran's Islamic Revolution Guards Corps, and Abu Mahdi al-Muhandis, deputy chief of Iraq's paramilitary Hashd Shaabi forces.

The tension pushed the two sides to hold a round of strategic dialogues on June 12, during which the United States confirmed that it does not seek permanent military presence in the country and that over the coming months the U.S. would continue reducing forces from Iraq and discuss with the government of Iraq the status of remaining forces.

Over 5,000 U.S. troops have been deployed in Iraq to support Iraqi forces in battles against the IS, mainly for training and advisory purposes.

The troops were part of the U.S.-led international coalition that has also been conducting air raids against IS targets in both Iraq and Syria.