TEHRAN, Nov. 3 (Xinhua) -- Under normal circumstances, Kamal, an Afghan migrant in Iran, would have become a pop singer or a civil engineer as he had wished, were it not for the U.S. invasion of Afghanistan in 2001. 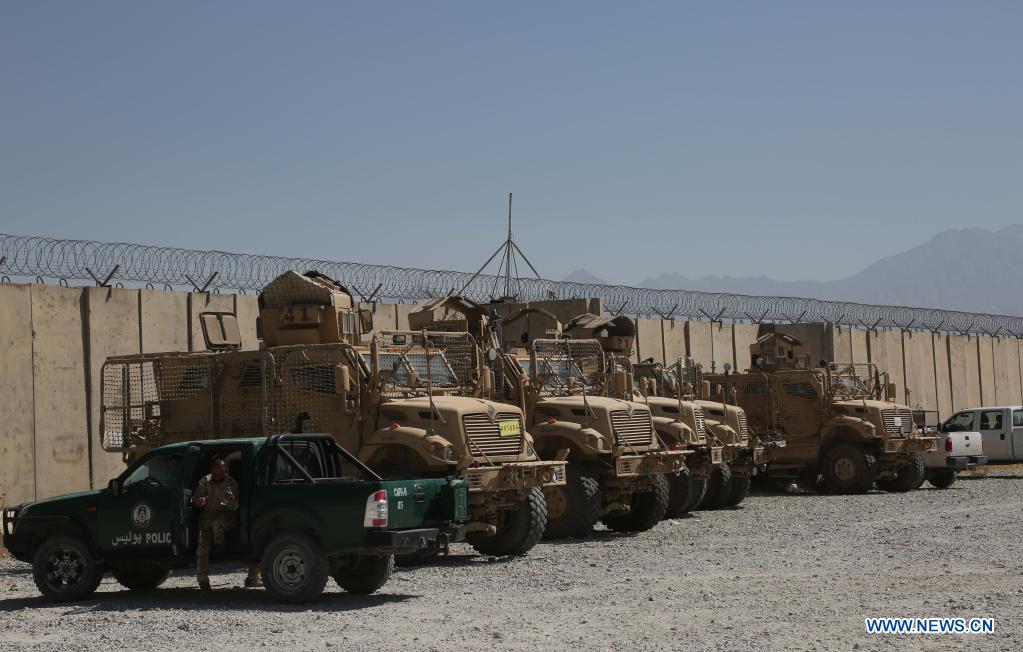 Violence has plagued Afghanistan ever since then, leaving behind a broken economy and a shattered society. Many Afghans, including Kamal, had to flee to other countries, including neighboring Iran, to scrape a living.

Currently a construction worker in Iran and a father of three kids, Kamal has been frequently traveling between Iran and Afghanistan to eke out a living and make ends meet since 2002, when he was merely 12 years old.

"We were already miserable and suffering from ongoing violence," Kamal told Xinhua at a construction site. "The United States made us more miserable after it attacked Afghanistan."

The United States invaded Afghanistan in response to major suicide attacks orchestrated by Islamic extremist group al-Qaida on America's soil on Sept. 11, 2001. The military campaign, which lasted nearly 20 years, led to hundreds of thousands of deaths, including Kamal's mother.

"It is obvious, the war in Afghanistan did not end on the terms we wanted, with the Taliban now in power in Kabul," Gen. Mark Milley, chairman of the U.S. Joint Chiefs of Staff, told a hearing after the military earlier completed the pullout of its troops from Afghanistan.

"Strategically, the war is lost, the enemy is in Kabul. So you have a strategic failure while you simultaneously have an operational and tactical success," Milley said.

Ramesh, a 24-year-old Afghan, immigrated to Iran 20 years ago when the United States launched the Afghanistan War. He has always been dreaming about returning to his homeland, but the road back home is not easy.

"My goal is to serve my family and my country because I love them," the young man said, adding that "but the situation in Afghanistan, which goes back to 20 years ago, slows down the process of achieving my goals."

The longest war in U.S. history has led to escalating violence in Afghanistan but a large number of promises Washington made to Kabul remain unfulfilled, making peace, stability, and prosperity too far to reach for the war-torn country.

"I don't want to go to Europe or any other countries," Ramesh said. "I want to go back to Afghanistan, and that's why I studied computer engineering."

With shared borders and cultural affinity with Afghanistan, among other factors, Iran has been the favorite destination for millions of Afghans seeking a new life.

Many young Afghans in Iran, like Ramesh, still want to go back to help their country and people in need.

Narges, 22, is also among them. "Immigration was not my choice, and it is a compulsory subject for me," said Narges, who just graduated with an accounting major from Iran's Kharazmi University.

"I hope to go back to my country one day and do my best to make that positive change and inspire other people," she said.

Following Taliban's takeover in mid August and announcement of the caretaker government on Sept. 7, the United States has frozen Afghanistan's assets in U.S. banks.

Washington has reportedly frozen some 9.5 billion U.S. dollars in assets of the Afghan central bank on charges of the presence of terrorist groups in the country.

"Freezing Afghanistan's assets in America has led to price hike in the local market as the price of one sack flour (50 kg) was 1,200 afghani (13 U.S. dollars) but today it costs 2,300 afghani (25 U.S. dollars)," Kabul resident Noorzada said.

Accusing the United States of exacerbating the economic woes in Afghanistan, Noorzada said Washington's antipathy to the Taliban government in Kabul has virtually deprived ordinary Afghans of their daily income.

Near the Iranian border with Afghanistan, an Afghan refugee told Iranian media in August that "we need our country to be free and independent."

"We need peace after years of chaos inflicted on us by Americans and their allies," he was quoted as saying.