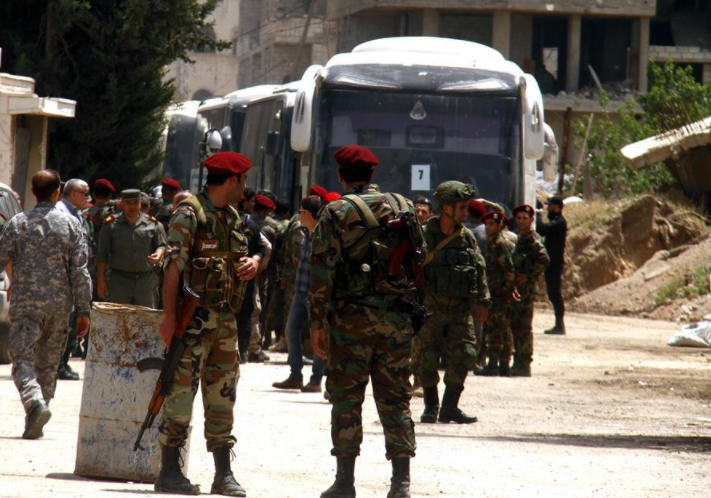 DAMASCUS, Oct. 13 (Xinhua) -- US-led warplanes struck a convoy of the Syrian army near the northern city of Raqqa on Sunday with no reports on casualties, a war monitor reported.

The warplanes targeted the Syrian military convoy in the al-Rasafeh area in the southwest of Raqqa city as the convoy was moving toward the city of Tabaqa in the west of Raqqa, the Syrian Observatory for Human Rights said.

The Britain-based watchdog group said that the U.S. is trying to hinder the deployment of Syrian army in northern Syria.

It added that the Syrian government's forces and Kurdish forces reached a deal, mediated by Russia, to counter the Turkish attack in northern Syria.

It allows for the deployment of the Syrian army on the Syrian-Turkish borderline from the city of Ayn al-Arab, also known as Kobane, in the northern countryside of Aleppo all the way to the Syrian-Iraqi border area in eastern Syria.

On Sunday, the Kurdish Autonomous Administration of North and East Syria, known as Rojava, said in a statement that it had reached an agreement with the Syrian government to confront the Turkish assault.

The Syria official media outlets said that the Syrian army was moving toward the northern region to "confront the Turkish aggression."

On Wednesday, Turkey started the military campaign in northern Syria in an attempt to eliminate the the Kurdish-led Syrian Democratic Forces (SDF) and its umbrella, the People's Protection Units, which are both deemed by Ankara as separatists and terrorists.

The Turkish operation, which came after the withdrawal of the U.S. forces from the northern Syria, also aims to create a safe zone there to resettle millions of Syrian refugees.

Syrian Foreign Ministry has issued two statements since the beginning of the Turkish operation, accusing Ankara of targeting residential areas and causing deaths of civilians while holding the Kurdish forces responsible for the Turkish military incursion.