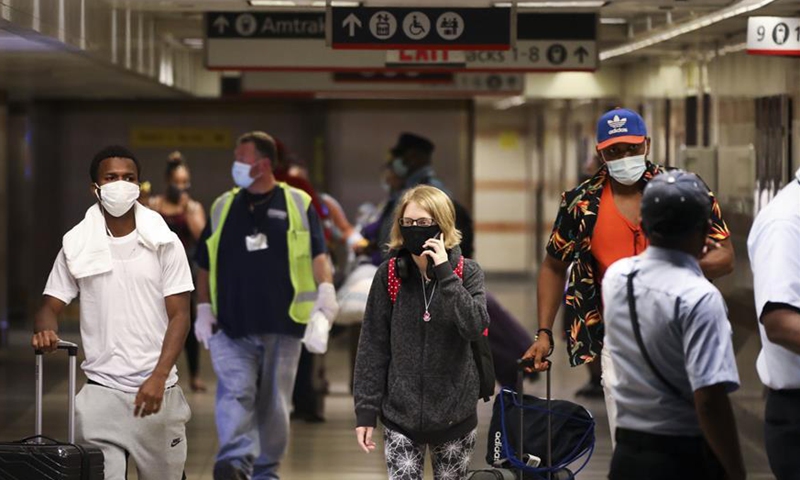 The US State Department on Thursday lifted its highest level of travel advisory that warned US citizens against international travel. The country will return to its system of providing specific travel advice to different countries, the department said in a Thursday note.

"We continue to recommend US citizens exercise caution when traveling abroad due to the unpredictable nature of the pandemic," the department said.

The advisory was originally issued on March 19 when the COVID-19 pandemic became severe around the world. Its decision to lift the advisory drew wide criticism from Chinese netizens as the US is now considered the worst affected country in the world. Many said it is only the country's own wishful thinking to start traveling, considering its startling numbers of confirmed COVID 19 cases and deaths.

"The world might release a warning against travelling to and from the US," one netizen commented.

"Anywhere in the world is safer than the US," another said.

Many Chinese called the decision to ease international traveling irresponsible, blaming the US government for its poor response to control the epidemic.

"Is the US giving up its epidemic control measures and preparing to spread virus globally?" a netizen asked ironically.

"So many people have died already in the US. Don't you take human life seriously? Why don't you do more to prevent further infections?"

As of 5:33 pm on Thursday local time, the number of COVID-19 infections in the US reached 4.87 million, with nearly 160,000 people dead. A total of 2,151 people died within 24 hours from 5:33 am Wednesday, according to data from the Coronavirus Resource Center of Johns Hopkins University.

According to the epidemic analysis model of the Institute for Public Safety Research of Tsinghua University, the number of new confirmed cases in the US will grow at a slower pace this month, but the total number of confirmed cases is expected to reach 6 million by the end of August, Liang Manchun, an associate research fellow at the institute, told the Global Times.

"The total number of infections is still growing, so it is too early to say that the pandemic has been controlled in the US," Liang said, adding that even with its good economic and medical situation, the US is now faced with such a scenario, which shows that it has done a poor job in controlling the epidemic.

The EU excluded the US from its "safe list" that allows travelers from some countries to enter since July. The UK requires travelers from the US to stay in isolation for 14 days.

India extended the suspension of scheduled international flights until August 31. However, it previously signed an agreement with the US which allows some people to travel to and from the country "as per government norms," according to a report by the Times of India. Starting from Saturday, it will also halve the amount of time required for inbound travelers to undergo institutional and home quarantine from 14 days to seven days, the Hindu reported.

However, India is also struggling with the soaring number of cases. It reported a record 62,538 new cases in a span of 24 hours on Friday, with the total number surpassing 2.02 million, the country's authority announced. It is now the third country with the cumulative number of confirmed cases exceeding 2 million, after the US and Brazil