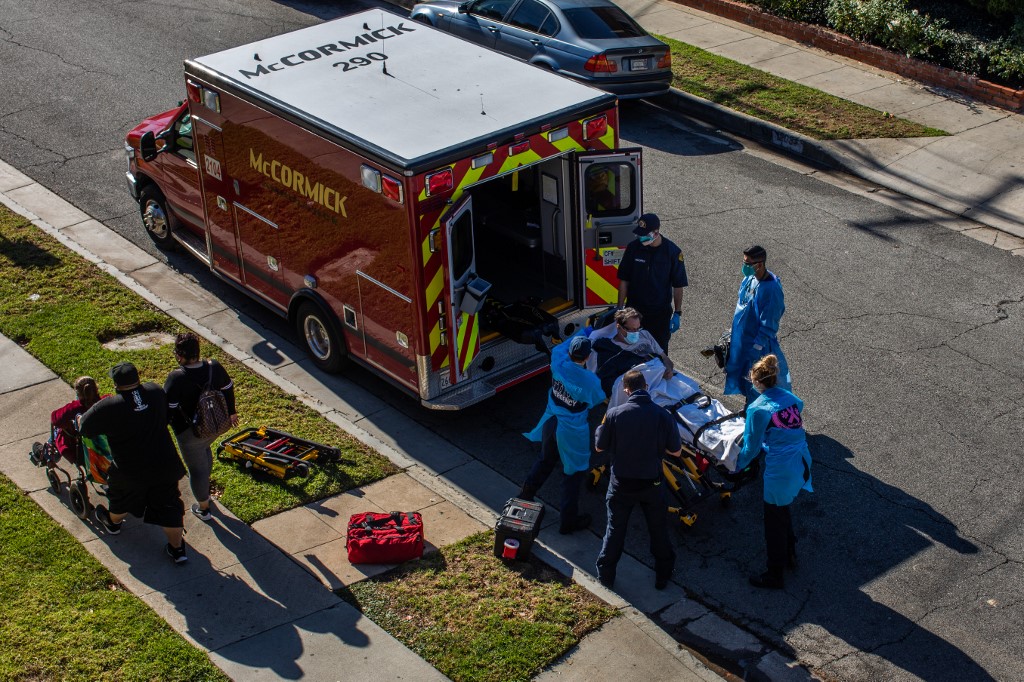 In this file photo taken on December 29, 2020 after administering him with oxygen, County of Los Angeles paramedics load a potential Covid-19 patient in the ambulance before transporting him to a hospital in Hawthorne, California as a family walks by. (Photo: AFP)

The United States broke its own record for the number of daily deaths from Covid-19 yet again Tuesday, recording 3,936 fatalities in 24 hours, according to a tally kept by Johns Hopkins university.

The worst-hit country in the world by the pandemic also recorded 250,173 new cases in the period up until 8.30 pm Tuesday (0130 GMT Wednesday), the Baltimore-based university's records showed.

That brings the US to more than 21 million cases and 357,067 deaths in total since the start of the pandemic.

The number of people hospitalized is also at its highest since the beginning of the pandemic, with more than 131,000 patients occupying beds due to Covid-19, according to data from the Covid Tracking Project.

The situation is particularly dire in the south and west of the country.

Los Angeles ambulance workers have been told to stop transporting some patients with extremely low survival chances to hospital, and to limit oxygen use, as record Covid cases overwhelm medical resources.

The previous record for deaths in one day was set six days ago, with more than 3,920 deaths.

The United States has been facing a spectacular surge in cases in recent months. Since the end of November, the number of daily deaths has increased dramatically, regularly exceeding 2,000 and often 3,000 deaths per day.

An expected surge driven by holiday gatherings is expected to aggravate the situation further.

The world's wealthiest country is ultimately counting on the vaccination campaign, which began in mid-December, to overcome the epidemic.

But less than two percent of the population has so far been covered, with 4.8 million people having received a first injection.

On Tuesday, President-elect Joe Biden, who will take office on January 20, spoke with his future team in charge of the health crisis.

A number of options for accelerating vaccine delivery -- including the possibility of increasing the role of the federal government -- were discussed, according to a statement.