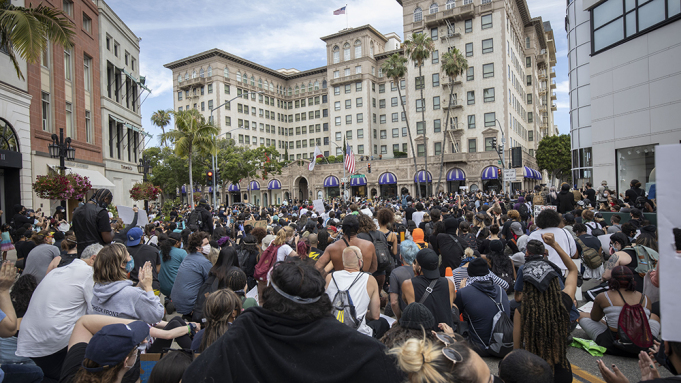 LOS ANGELES, June 1 (Xinhua) -- A countywide curfew will be in effect Monday for a second night in Los Angeles County after another day of protests over the death of African American man George Floyd in police custody last week in Minneapolis, authorities said.

County officials announced that the curfew for the most populous county in the United States with a population of over 10 million will run from 6 p.m. Monday to 6 a.m. Tuesday local time (0100 to 1300 GMT Tuesday).

Kathryn Barger, chair of the Los Angeles County Board of Supervisors, tweeted that the extension of the countywide curfew is "to protect against any further devastation."

"With COVID-19 fresh in our minds, we see that staying home can save lives. Life is precious -- and we must do everything we can to protect one another," she added.

During the curfew, all residents are required to stay off "public streets, avenues, boulevards, places, walkways, alleys, parks or any public areas or unimproved private realty within Los Angeles County."

Any violation of the order is a misdemeanor, punishable by a fine not to exceed 1,000 U.S. dollars or an imprisonment up to six months, or both, according to the terms of the curfew.

The announcement came after the protests over Floyd's death went into the sixth straight day on Monday in the Los Angeles area.

Los Angeles Mayor Eric Garcetti also extended a curfew for the City of Los Angeles on Monday. Some other cities in the county, such as Beverly Hills, Santa Monica and Long Beach, even issued their own stricter curfew orders in response to days of chaotic protests.