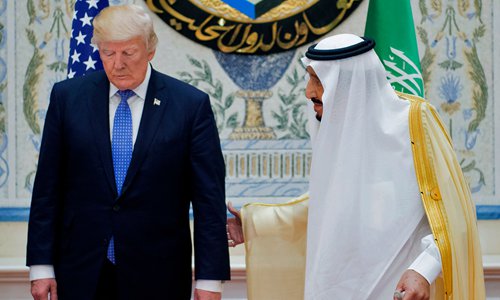 Twenty-five years ago, then US president Bill Clinton looked on as Palestinian leader Yasser Arafat and Israeli Prime Minister Yitzhak Rabin shook hands on the White House lawn, sealing the Oslo accords.And in 1979, Jimmy Carter hosted the leaders of Israel and Egypt at Camp David - another indelible moment in diplomatic history.Donald Trump can only dream of such a scene unfolding on his watch.Under the Republican leader, the United States is further away than ever from playing its traditional role as a mediator in the long-simmering Middle East peace process.Trump, a foreign policy novice, promised upon taking office to help broker the "ultimate deal" between Israel and the Palestinians.He tasked his son-in-law and ­senior aide Jared Kushner with leading a small group to make that happen. But that task force was seen as too close to Israel, and inexperienced in the world of high-stakes diplomacy."It is something that I think is frankly, maybe, not as difficult as people have thought over the years," Trump said in May 2017.But more than a year later, that notion has been brutally squashed."All my life, I've heard that's the hardest deal to make, and I'm starting to believe that maybe it is," Trump said last week, though he added he still believed he could make it happen.'Peace through strength'?It's true that since Trump took office, the situation has radically changed.At first, the Palestinians offered the mercurial president the benefit of the doubt. But late last year, they froze all contact with Washington after Trump recognized Jerusalem as Israel's capital.That stance crossed a stark red line for Palestinian leaders, and flew in the face of decades of international consensus that the status of the Holy City should be determined via negotiations.Since the breakdown in US-­Palestinian ties, the Trump ­administration has redoubled efforts to both punish Palestinian ­leaders and twist their arm so that they return to talks with Israel.US aid has been effectively wiped out, as has its support for the UN agency that assists 3 million Palestinian refugees, known as UNRWA. And on Monday, Washington ordered the closure of the Palestine ­Liberation Organization's mission in the US capital - an about-face 25 years after PLO leader Arafat was ­welcomed at the White House.Trump says he wants to achieve "peace through strength" - but is that viable anymore?US officials "believe that ­Palestinians can be convinced that they have lost and must take ­whatever set of arrangements - ­perhaps some limited form of autonomy with economic sweeteners - that they are offered," says Michele Dunne, a researcher at the Carnegie Endowment for International Peace.According to Dunne, the ­Americans appear to be trying to take the thorniest issues - the status of Jerusalem, the right of return for ­Palestinians, and Palestinian statehood - off the negotiating table."Clearly those issues remain highly relevant to Palestinians as well as many other Arabs and Muslims," Dunne noted, adding, "It seems very unlikely that Palestinians will fold in that way."

Mystery peace planThe Palestinian Authority has denied Trump the role of a Middle East peace mediator that Washington enjoyed for decades.But that is no surprise to Aaron David Miller, a former negotiator for both Republican and ­Democratic ­administrations on the Middle East ­issues, who says Washington has never really been an "honest broker.""Our relationship with Israel has prevented us from being a honest broker," Miller said. "We can be at certain times what I call an effective broker. We've used that relationship at times to reach agreements between Arabs and Israelis," he said, citing the Camp David and Oslo accords.For now, however, "We have compromised, undermined and abandoned any possibility of being an effective broker," said Miller, who is the Middle East program director at the Wilson Center, a Washington think tank."I've never seen an administration that is so preternaturally supportive of Israel and at the same time so hostile towards the Palestinian piece of this peace equation."The issue is such a minefield that Kushner's team has not even found the right time to unveil its long-awaited peace plan - its unveiling has been delayed for months.But the White House insists the plan has not been abandoned."It's an extraordinarily ­ambitious project that the administration has undertaken," National Security ­Advisor John Bolton said Monday."The sensitivity and the ­appropriateness of the timing of ­rolling it out are difficult questions."Miller says barring a real surprise, such as a roadmap to Palestinian statehood with East Jerusalem as its capital, "the most likely outcome is a 'no' from the Palestinians."Such a refusal may even be the White House's goal, Dunne says, so it can "use the Palestinians' inevitable rejection as a justification for further changes to the US position on behalf of Israeli claims to the West Bank."