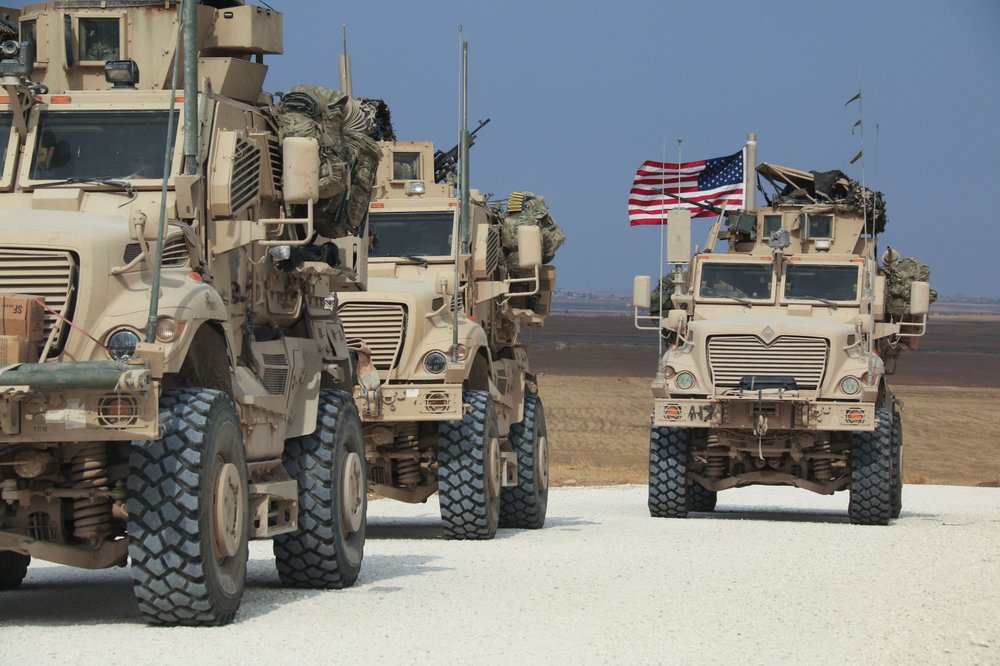 US military convoy stops near the town of Tel Tamr, North Syria, October 20, 2019. Kurdish-led fighters and Turkish-backed forces clashed sporadically Sunday in northeastern Syria amid efforts to work out a Kurdish evacuation from a besieged border town, the first pull-back under the terms of a US-brokered cease-fire. (Photo: AP)

The US may leave some forces in Syria to secure oil fields and make sure they don’t fall into the hands of a resurgent Islamic State, Defense Secretary Mark Esper said Monday, even though President Donald Trump has insisted he is pulling troops out of the country and getting out of “endless wars.”

The Pentagon chief said the plan was still in the discussion phase and had not yet been presented to President Donald Trump, who has repeatedly said the Islamic State has been defeated.

Esper emphasized that the proposal to leave a small number of troops in eastern Syria was intended to give the president “maneuver room” and wasn't final.“

There has been a discussion about possibly doing it,” Esper told a press conference in Afghanistan before heading to Saudi Arabia. “There has been no decision with regard to numbers or anything like that.”

Still, the fact that such a plan was under consideration was another sign the administration was still trying to sort out its overall strategy amid fierce criticism from the president’s Republican allies of his abrupt decision to pull U.S. forces back — essentially clearing the way for Turkey’s military incursion into the border region to push back the American-allied Kurdish forces.

A White House official said GOP Sen. Lindsey Graham raised the issue of keeping U.S. forces in eastern Syria to protect the oil fields and that Trump supported the idea. The official spoke on condition of anonymity to discuss internal discussions.

Esper said the main goal would be to make sure the Islamic State doesn’t gain control of the oil fields and the revenue they generate.

The defense secretary said American troops around Kobani are withdrawing and that the U.S. is maintaining combat air patrol over U.S. forces in Syria as the withdrawal goes on. He said the U.S. is using overhead surveillance to try to monitor the recently negotiated cease-fire “as best we can.”

While Trump has insisted he's bringing home Americans from “endless wars” in the Mideast, Esper said all U.S. troops leaving Syria will go to western Iraq and the American military will continue operations against the Islamic State group.

Esper told reporters over the weekend that the fight in Syria against IS, once spearheaded by American allied Syrian Kurds who have been cast aside by Trump, will be undertaken by U.S. forces, possibly from neighboring Iraq.

But he said in a tweet Monday that the U.S. would only “temporarily reposition” troops from Syria in the region until they could return home.

Esper did not rule out the idea that U.S. forces would conduct counterterrorism missions from Iraq into Syria. But he told reporters traveling with him that those details will be worked out over time.

Trump nonetheless tweeted: “USA soldiers are not in combat or ceasefire zones. We have secured the Oil. Bringing soldiers home!”

“It's time for us to come home,” Trump said, defending his removal of U.S. troops from that part of Syria and praising his decision to send more troops and military equipment to Saudi Arabia to help the kingdom defend against Iran.

Esper's earlier comments to reporters traveling with him were the first to specifically lay out where American troops will go as they shift from Syria and what the counter-IS fight could look like. Esper said he has spoken to his Iraqi counterpart about the plan to shift about 1,000 troops from Syria into western Iraq.

Trump's acting chief of staff, Mick Mulvaney, asked about the fact that the troops were not coming home as the president claimed they would, said, “Well, they will eventually.” He told “Fox News Sunday” that “the quickest way to get them out of danger was to get them into Iraq.”

Trump ordered the bulk of the approximately 1,000 U.S. troops in Syria to withdraw after Turkish President Recep Tayyip Erdogan made it clear in a phone call that his forces were about to invade Syria to push back Kurdish forces that Turkey considers terrorists.

The pullout largely abandons America’s Kurdish allies who have fought IS alongside U.S. troops for several years. Between 200 and 300 U.S. troops will remain at the southern Syrian outpost of Al-Tanf.

The U.S. has more than 5,000 American forces in Iraq, under an agreement between the two countries. The U.S. pulled its troops out of Iraq in 2011 when combat operations there ended, but they went back in after IS began to take over large swaths of the country in 2014. The number of American forces in Iraq has remained small due to political sensitivities in the country, after years of what some Iraqis consider U.S. occupation during the war that began in 2003.

Esper said he will talk with other allies at a NATO meeting in the coming week to discuss the way ahead for the counter-IS mission.

Asked if U.S. special operations forces will conduct unilateral military operations into Syria to go after IS, Esper said that is an option that will be discussed with allies over time.

On Sunday, U.S. House Speaker Nancy Pelosi led a group of American lawmakers on a visit to Jordan to discuss “the deepening crisis” in Syria.

Jordan’s state news agency said that King Abdullah II, in a meeting with the Americans, stressed the importance of safeguarding Syria’s territorial integrity and guarantees for the “safe and voluntary” return of refugees.