Ever since COVID-19 began spreading uncontrollably across the US, the White House and several US politicians have attempted to deflect away from their own failure in responding to the pandemic by coming up with conspiracy theories, one of which involved blaming the Wuhan Institute of Virology for leaking the virus. In response to these groundless accusations, the institute on Friday granted access to NBC news, allowing its journalists to meet with senior Chinese scientists working to pinpoint the origins of the virus, and gave them a tour of the facility. 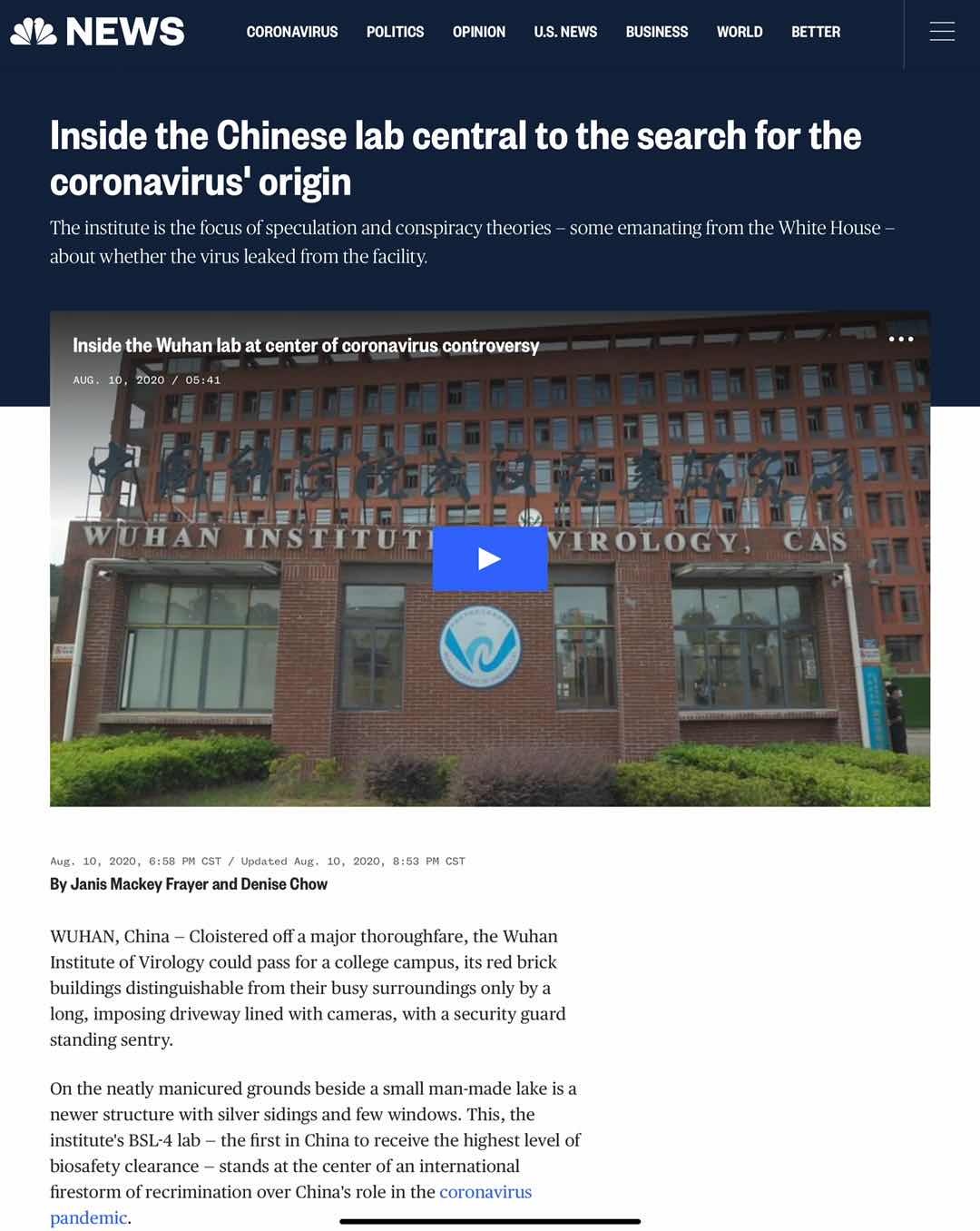 During the roughly five-hour visit, which included a tour of the BSL-4 lab, where technicians clad in protective suits handled small vials and other equipment while sealed inside a thick-walled glass enclosure, Wang Yanyi, director of the Wuhan Institute of Virology, said she and others felt they were being unfairly targeted. She said that politics should not hamper investigations into how the coronavirus became transmitted to humans. NBC news later aired a report titled “Inside the Chinese lab central to the search for the coronavirus' origin”, in which US reporters drew the conclusion that the White House’s accusation against China lacked any solid evidence.

According to the article, the White House has shown no credible proof to back up claims that the coronavirus was either manufactured at or accidentally leaked from the lab, and neither have any other sources. However, Trump continues to add fuel to this idea, often through the use of racist rhetoric, by regularly referring to the pathogen as the "China virus," the "Wuhan virus" or "kung flu." US Secretary of State Mike Pompeo has repeated similar claims, also without providing proof.

“In April, current and former U.S. intelligence officials told NBC News that the U.S. intelligence community was examining whether the virus emerged accidentally from the Wuhan lab. Spy agencies had ruled out that the coronavirus was man-made, the officials said at the time. Democrats in Congress who have asked administration officials to provide information about any such associations say their requests have been ignored,” noted the article.

During the interview with NBC News, Wang said that none of the institute's scientists had contracted the virus, which she said made it extremely unlikely that the pathogen could have escaped from the facility.

Her statement was supported by Peter Daszak, president of EcoHealth Alliance, a New York City-based nonprofit dedicated to studying and preventing pandemics, which worked with the Wuhan institute for 16 years until the U.S. government cut funding this year. He also rejected the idea that the virus could have leaked from the lab.

"The fact that they published the sequence so quickly suggests to me that they weren't trying to cover up anything," he told NBC.

There is "absolutely zero evidence that it escaped from a lab," he added.

In May, the director of the US National Institute of Allergy and Infectious Diseases, Anthony Fauci, told National Geographic that he discounted the idea that the virus had accidentally escaped from a lab.

Wang said the institute will "fully support" the World Health Organization, which has dispatched a team to China to interview scientists in Wuhan and develop a framework to investigate the origin of the coronavirus. She also called for more international collaboration to this end.