WORLD US, Mexico widen asylum crackdown to push back all migrants

US, Mexico widen asylum crackdown to push back all migrants 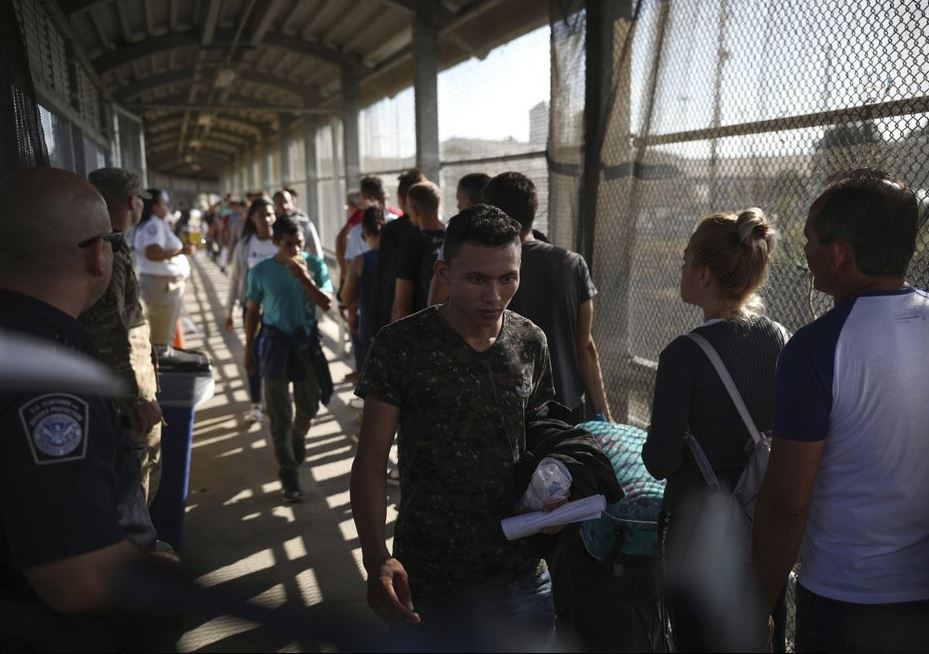 Migrants return to Mexico as other migrants line up on their way to request asylum in the US, at the foot of the Puerta Mexico bridge in Matamoros, Mexico, that crosses into Brownsville, Texas on Aug. 2, 2019. (Photo: AP).

A Trump administration program forcing asylum seekers to wait in Mexico has evolved into a sweeping rejection of all forms of migrants, with both countries quietly working to keep people out of the US despite threats to the migrants’ safety.

The results serve the goals of both governments, which have targeted unauthorized migration at the behest of President Donald Trump, who threatened Mexico with potentially crippling tariffs earlier this year to force action.

Some people sent to wait in the Mexican border cities of Nuevo Laredo and Matamoros said they never requested asylum, including Wilfredo Alvarez, a laborer from Honduras. He crossed the Rio Grande without permission to look for work to support his seven children and was unexpectedly put into the program. He was sent back to Mexico with a future court date.

“We thought that if they caught us, they would deport us to our country, but it was not that way,” Alvarez said. “They threw us away here to Mexico, but we are not from here and it’s very difficult.”

Others said they were never asked if they feared persecution in Mexico, despite US government rules that say migrants should not be sent there if they face that risk.

US border agents give each returned migrant a date for an immigration court hearing at tents set up near the border. But the Mexican government has bused hundreds of migrants to cities around 1,000 miles (1,600 kilometers) away, ostensibly for their safety. And there’s no promise that Mexico will bring migrants back.

Instead, Mexico is offering to return many Central Americans to the Guatemala border, and others are choosing to leave at their own expense.

A priest running a shelter in Nuevo Laredo called the process a form of “undercover deportation.”

“It’s a way to send them to a country that’s not theirs and save money,” Aaron Mendez said. “And Mexico has not said one word.”

Two weeks after speaking to The Associated Press, Mendez was kidnapped by armed men who entered the shelter. He is still missing.

The effort to keep migrants in Mexico is officially called the “Migrant Protection Protocols,” but it’s better known as the “Remain in Mexico” program. Announced as a plan to crack down on asylum claims, it has been in effect since January and was expanded in July to the eastern end of the US-Mexico border.

In that region, on one side of the border is South Texas’ Rio Grande Valley, where border agents apprehend more migrants crossing illegally than in any other section. On the other side is the state of Tamaulipas, known for its cartel-linked violence and corruption. Tamaulipas is the only US-Mexico border state that the US government warns Americans not to visit due to safety concerns.

Migrants in Mexican border cities said they were told they would receive help when they were sent back to Mexico, a promise that for many has not been kept.

Thirteen people told the Associated Press they were not asked for any information about their cases by US border agents.

“They only asked for a name, a fingerprint, and then ‘out,’” said Blanca, a Guatemalan woman who was sent back to Nuevo Laredo in July with 15 relatives. Blanca asked that her last name be withheld due to fear that she would be harmed.

She said she was prepared to tell border agents that gang members had killed her sister, leading the rest of her family to flee. She brought paperwork documenting the attack, but said, “We couldn’t even show them.”

Jodi Goodwin, an immigration attorney in Harlingen, Texas, has agreed to represent for free 11 cases involving people waiting in Matamoros, including three families and a pregnant woman from Peru. Goodwin persuaded border agents on Sunday to allow the pregnant woman inside the US as well as a woman accompanied by a baby with Down syndrome. The next day, she said, the pregnant woman had been sent back to Mexico.

In nearby Reynosa, human rights lawyer Jennifer Harbury has worked with Mexican attorneys to help waiting migrants obtain protective orders against people who have attacked them. In a recent blog post, Harbury said she had expected around 200 people to apply for orders. Instead, at least 500 people came in one day.

The lawyers were able to complete about 100 requests.

“When I left, people were grabbing at my sleeve and begging for help,” she wrote.

Even before the Remain in Mexico program, border agents forced migrants to wait in Matamoros and Nuevo Laredo for months at a time to seek asylum under a policy known as “metering.” The delays led many migrants to try to cross the Rio Grande illegally. Photos of a man and his daughter who drowned at the bank of the river in Matamoros shocked people around the world.

The two cities are dangerous, with consistent reports of migrants being kidnapped or shaken down for bribes.

The International Committee of the Red Cross warned of an “increasingly worrying picture” for migrants in the region, citing a lack of basic health services and protection measures, especially for children traveling alone. Mexico has offered migrants work permits and the bus rides to safer cities.

Adam Isacson, an expert with the Washington Office on Latin America, a research and advocacy group, said it was “virtually impossible” for many immigrants to return to the US to continue their asylum cases. And if a migrant does not appear on the assigned date, an immigration judge can issue an order that could make it impossible for that person to re-enter for 10 years.

Isacson said Mexican officials may have thought the program would apply only to a few thousand people and might have been stopped by US courts, which have so far declined to do so. Instead, it has grown into one of the Trump administration’s biggest tools to keep out migrants at the southern border.

The US government is building tent courts in Laredo and Brownsville, where immigration judges will hold hearings by video. The first hearings are expected in September. The Department of Homeland Security would not commit to allowing observers to watch the hearings, saying that “heightened security measures” are necessary even though immigration court rules say that most hearings should be open.

Mendez, the missing priest, explained what he thought was the motive behind the entire process.

“What the US wants is to get rid of Central Americans through a legal way,” he said. “And it does it by giving out these documents.”