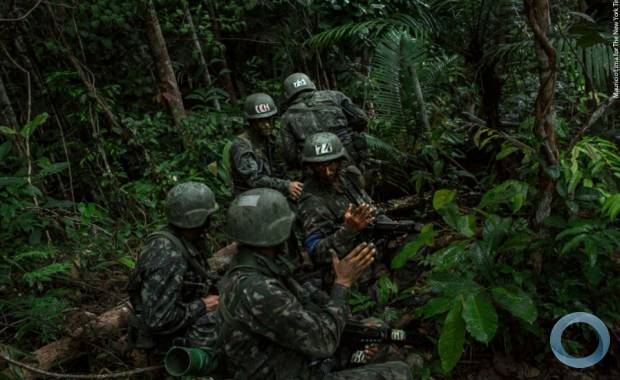 US military personnel are taking part this week in the largest international army operation ever held deep in the Amazon jungle of northern Brazil, in a sign of closer US-Brazil defense ties.

Troops from Brazil, Colombia and Peru will set up a temporary military base in their tri-border region for a week-long logistics exercise in humanitarian assistance and disaster relief, Brazilian army officials said.

About 50 U. personnel will be present for the exercise, including 19 observers and 31 members of the Montana Air National Guard who will be based out of Manaus providing air transportation, a US embassy statement said.

The United States will provide a Hercules C-130 transport plane to move personnel and equipment, the Brazilian army said.

The presence of U.S military personnel in Brazil’s Amazon region underscored improving defense relations between the two most populous countries in the Western Hemisphere after more than a decade of distancing under leftist Brazilian governments.

In March, then-commander of the US Army South, Major General Clarence K. K. Chinn visited military installations in the Amazon and was decorated in Brasilia. Bilateral agreements on defense cooperation and information security have taken effect recently after years of stalling in Brazil’s Congress.

General Guilherme Gaspar de Oliveira, a Brazilian army logistics commander, told local media it was the first time such a large military exercise has been held in the Amazon. He said the exercises helped prepare armed forces for a humanitarian crisis such as mass migration.

Brazil has kept a close eye on economic and political upheaval in neighboring Venezuela that could trigger such an exodus. More than 30,000 Venezuelans have already fled over the border into the northern Brazilian state of Roraima, according to federal police.

The Brazilian Army said Venezuela is one of the 19 countries sending observers for the so-called United America Operation from Nov. 6-13.

Brazilian Defense Minister Raul Jungmann will attend the jungle exercises on the weekend and then fly to Washington for three days of talks with Pentagon officials, his press representative said.