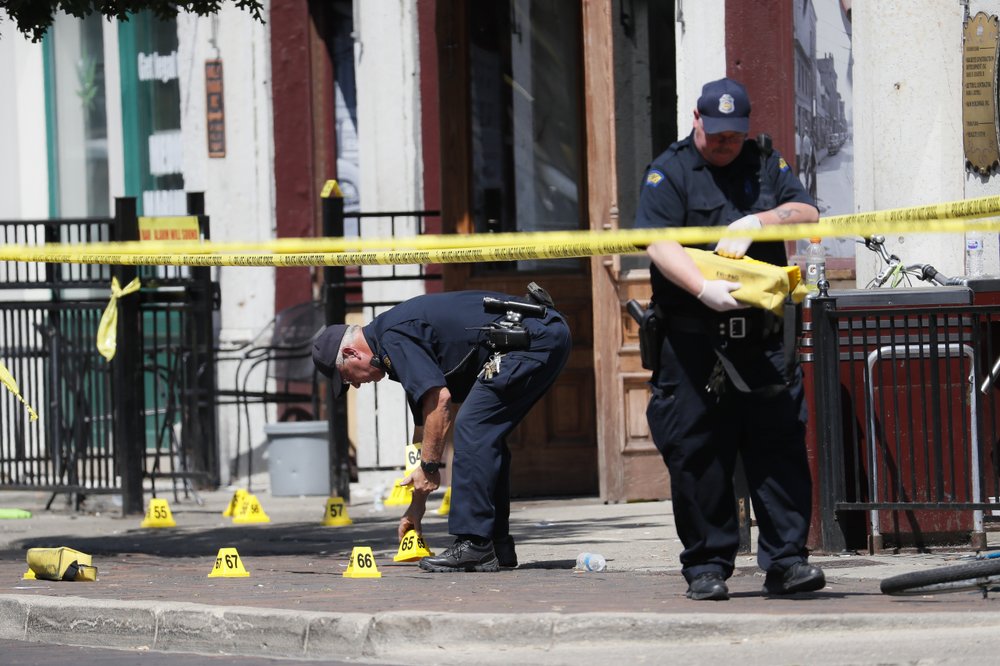 Washington (People's Daily app) - Dozens of people in the US were killed in two mass shootings over the weekend, ripping through the nation and sparking more public anger over the lack of gun control progress.

On Saturday morning, a lone gunman opened fire at a Walmart in El Paso, Texas, killing 20 people and wounding 26. Roughly 24 hours later, a mass shooting in Dayton, Ohio, claimed 10 lives, including the alleged gunman, and left16 others wounded.

In El Paso, police arrested a white male suspect, Patrick Crusius, who is reportedly from Dallas, a city located in North Texas. It was also reported the alleged gunman’s motive may have been inspired by anti-immigrant sentiments.

According to the New York Times, law enforcement authorities are investigating what may have been a statement posted online by Crusius before the rampage. In the four-page statement, he supposedly voiced sympathy for the Christchurch gunman in New Zealand, while outlining his personal fears about the increasing Hispanic population in the US.

The gunman in the Dayton shooting was later identified as Connor Betts. Among the nine victims was his sister.

Betts wore a mask, body armor, ear protection and had a high-capacity magazine capable of holding 100 rounds, the police said. The authorities said they still have not established a motive, but that Betts had arrived in the entertainment district where the shooting took place with his sister, Megan K. Betts, 22, and another “companion.” Dayton Mayor Nan Whaley said it only took the gunman less than one minute to end the lives of nine people.

US President Donald Trump condemned the shootings as “hateful and cowardly acts” in a White House statement. Trump ordered White House flags to be flown at half-staff and at all government buildings and foreign facilities through August 8.

CNN reported that Mayor Nan Whaley said she received calls from over 70 city mayors, including Buddy Dyer, mayor of Orlando, Florida where 49 people were killed at a nightclub in 2016. Whaley said she also received a call from Pittsburgh Mayor Bill Peduto, whose city suffered a mass shooting at a synagogue in October 2018.

In the US, gun control remains a divisive political issue. The general public feels the problem has been hijacked by partisan disputes and special interest groups. Experts have speculated the shootings are the result of mounting racial tension and anti-immigrant sentiment.

The two shootings have created more political tension. Democrats have taken aim at Trump. Critics have argued that Trump has been too sympathetic toward white supremacists. Former congressman Beto O’Rourke (D), a presidential hopeful for next year’s election, remarked that Trump “doesn’t just tolerate -- he encourages this type of open racism.”

Acting White House chief of staff Mick Mulvaney on Sunday, defended Trump, disputing that politics were connected with the shootings. The president’s daughter and adviser, Ivanka Trump tweeted: “White supremacy, like all other forms of terrorism, is an evil that must be destroyed.”

Other Democratic presidential candidates spoke out against the shootings, calling for stricter gun control measures. New Jersey Senator Cory Booker twittered, “Enough. We need to end this national nightmare. Praying for everyone affected by this unspeakable tragedy, and for our country to find the moral courage to take action to end this carnage.”

Former Vice President Joe Biden said, “How many lives must be cut short? How many communities must be torn apart? It’s past time we take action and end our gun violence epidemic.”

California Senator Kamala Harris said on Twitter, “Last week it was Gilroy. Today it’s El Paso. How can our country tolerate this? My prayers are yet again with families who are grieving and my thanks are with the first responders, but that is not enough. We must act.”