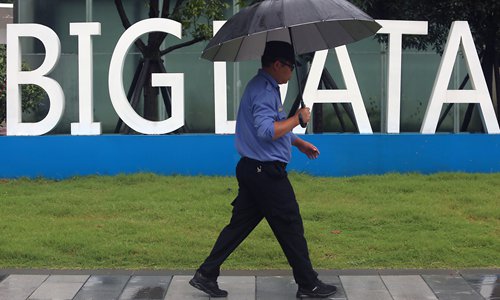 Foreign technology companies' moves to store data locally in China are in compliance with the nation's Cybersecurity Law, which aims to protect the country's network safety, and the US must respect China's cyberspace sovereignty and users' demand for information security, experts said on Monday.The US has demanded that China stop discriminating against foreign cloud computing providers, curb requirements for companies to store data locally and ease limitations on the transfer of data overseas, the Financial Times reported on Sunday. The report, citing three people briefed on the talks, said that China had yet to offer "meaningful concessions" on these requests. Experts said that the US' attempt to gain access to more Chinese data is "unfair" and creates "unilateral benefits" and the US must respect China's internet sovereignty. China's Cybersecurity Law, which came into effect on June 1, 2017, requires critical information infrastructure operators to store personal information and important data collected and generated in China within the country.If it is necessary to provide this information abroad to meet the needs of businesses, a company must conduct a safety assessment in line with the methods formulated by relevant departments of the State Council, China's cabinet.The cloud computing services of US companies including Apple Inc, Microsoft Corp and Amazon were localized in the Chinese market through setting up data centers and seeking cooperation with local companies.Apple announced in July 2017 that it would set up its first local data center in Southwest China's Guizhou Province, which the local government said was a cooperative effort with a global technology giant based on China's Cybersecurity Law.Starting on February 28, 2018, the operations of Apple's iCloud services in China were transferred to Guizhou-Cloud Big Data Industry Co, a Chinese internet services company. The new data center will help resolve many problems that Chinese iPhone users have faced, including data synchronization failures and internet connection errors, Lisa Jackson, an Apple senior executive, said in a report published in January 2018. The US companies' operations in China, conducted while storing data locally, guarantee that they can maintain a core technological advantage and better help them localize their business in the Chinese market, said Zhang Shuang, a Beijing-based independent industry analyst. The Cybersecurity Law is China's coping strategy against global network competition and a necessary method of protecting the network information security of the country and its people, Zhang told the Global Times on Monday.Safeguard sovereigntyDigital trade is among the issues expected to be on the table when US Trade Representative Robert Lighthizer and Treasury Secretary Steven Mnuchin arrive in Beijing on Thursday to resume bilateral trade talks after a nearly month-long pause, according to the Financial Times. China made an initial offer on digital trade that the US judged as insufficient, the report said.China has paid more attention to digital trade regulations and played a vital role in this activity, but its digital applications now mainly focus on the services industry and the trade itself is still at the starting phase, Zhang said, noting that more efforts are needed in intellectual property rights protection and cybersecurity."What matters is that China's basic position in digital trade is to protect network security, maintain cyberspace sovereignty and promote the sound growth of economic and social information," said Zhang."China's internet sovereignty is a basis to secure the sound development of its internet industry and companies. Foreign firms must respect it and Chinese users' demand for internet data and information security," Zhang noted.Unilateral interestsAs China increasingly participates in global digital services, some countries are keeping a wary eye on data services from China.China will surpass the US to be the largest datasphere by 2025, driven by faster growth of data from the Internet of Things and productivity in the country, read a report from International Data Corp and data storage firm Seagate, which was released in January.  The US can have more contact with Chinese data as China uses lots of US software and databases. Meanwhile, the US - citing data security concerns - does not want Chinese companies to access its data sources, which can be seen in the Huawei case, said Han Xiaoping, a chief analyst from energy industry website china5e.com."Such an imbalance would create unilateral benefits for the US and would also be unfair to Chinese firms," Han told the Global Times.The Chinese data industry has great growth potential thanks to the nation's large internet user base and the huge amount of time these people spend online. The sector is expected to further open up in the future, according to Han.The US is trying to impose pressure on China before the trade talks, he said.The Ministry of Industry and Information Technology and Amazon did not reply to the Global Times request as of press time.Newspaper headline: China’s digital sovereignty must be respected