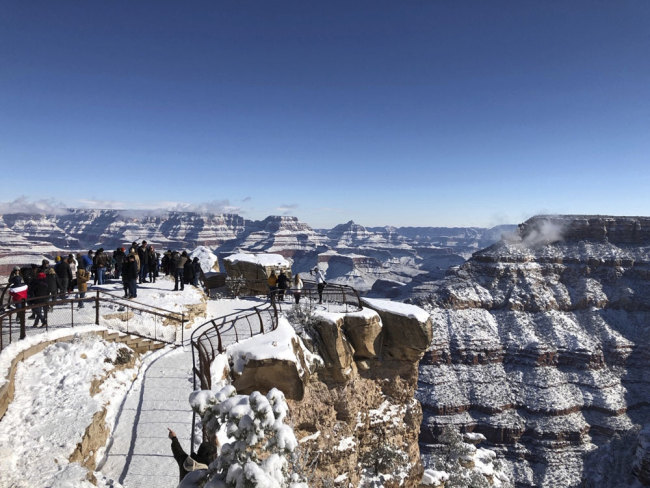 The US National Park Service (NPS) and Department of the Interior (DOI) are working in coordination at federal and state levels to investigate and address concerns of uranium exposure found at the Grand Canyon National Park.

In a phone interview with Xinhua on Friday, spokesperson of the park Emily Davis said an investigative team of radiation, industrial hygienist and occupational health experts are reviewing available information and will be in the park in the coming weeks.

The results of the review will be expected within 90 days, she said.

A health and wellness manager of the park recently told the media about the uranium find at the park's Museum Collection building and emailed all park staff, which brought the matter to the public attention.

"We take this matter very seriously and the NPS and DOI have moved to assemble the appropriate interagency health and safety specialists to determine possible safety concerns, and clarify the relevant facts regarding this issue," she said.

In June 2018, a routine environmental audit flagged three five-gallon buckets containing uranium rock samples at the Museum Collection building at the South Rim, according to Davis.

On June 18, 2018, the NPS moved the samples to a restricted area at the Orphan Mine site, which is closed to visitors and most employees.

Since the environmental audit in June 2018 identified a concern, park staff have been updated through all-employee emails.

Davis said subsequent inspections have indicated the safety of the Museum Collection building. A recent survey showed radiation at "background" levels seen naturally in the rocks of the Grand Canyon.

According to the NPS, the investigation team will review the exposure level and risk to park employees and visitors. They will also assess radiation safety practices, provide recommendations regarding how samples are managed in the future, and address the potential for long-term health monitoring.

In an interview with Xinhua, Gary Sandquist, professor of Mechanical and Nuclear Engineering at University of Utah, said only high levels used in nuclear medicine for radiation treatment can result in discernible health issues.

"The radiation-associated natural levels of uranium are very small, and are prevalent everywhere on the Earth," he said, adding the natural radiation levels in the Grand Canyon are no higher than in mines.

For instance, India has some very elevated uranium and thorium radiation levels, but there is no evidence of discernible health effects there, Sandquist said.

The park's Museum Collection building, located in an administrative area separate from visitor use areas, is a storage and research facility dedicated to preserving the physical artifacts that tell the Grand Canyon story.

Up to 1,000 visitors and researchers each year visit Grand Canyon's Museum Collection by appointment and reservation.