US Navy hospital ship in Los Angeles might scale back mission 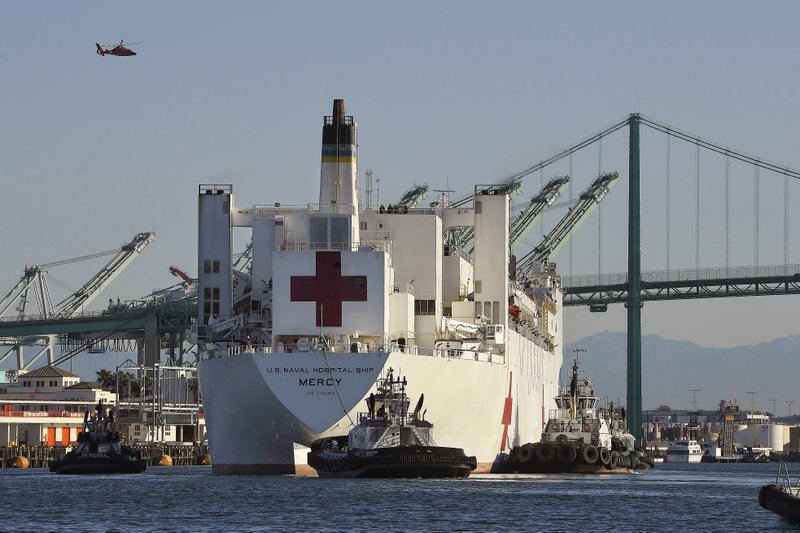 The USNS Mercy hospital ship docked in Los Angeles may be able to scale back its medical operation a bit over the next week as the coronavirus workload at area hospitals stabilizes, according to the ship’s captain and military documents.

The Mercy will also send about 40 medical staff to a regional skilled nursing facility on Monday, Navy Capt. John Rotruck, the ship’s commander, said Wednesday in an interview with The Associated Press. He said elderly patients will not be brought to the ship, despite earlier suggestions that could happen.

Rotruck said a plan under discussion would reduce the number of available hospital beds on the Navy ship from 1,000 to 250. Documents reviewed by the AP said the plan could free up medical staff that could then go on to other missions.

Two weeks ago, California officials were planning for a potential crush of coronavirus cases that by mid-May that could require adding up to 66,000 additional hospital beds. The Mercy was part of the ramp-up effort, but since then, hospitalizations have leveled off and ample rooms are available.

The ship left San Diego on March 23 and arrived in Los Angeles four days later to provide relief by taking patients who were not infected with the virus.

Many of the worst outbreaks now occurring are in nursing facilities, and some are having staffing issues as workers are infected or stay home.

Rotruck said there has been no final decision, but 250 beds would be a reasonable size to maintain. He said that “probably in the neighborhood of 100 or more people” could be made available for other missions, as a result of the reduction in beds. He said no decisions have been made on where medical staff may go.

“I’m not surprised if it happens,” he said, adding that 51 patients have been treated on the ship since it arrived and 17 were on board as of Wednesday. The ship has seen an average of 20 to 21 people a day.

Reducing the Mercy’s capacity, he said, won’t hurt its ability to relieve local hospitals. “From the perspective of our partners here in L.A., they won’t see any difference in what we’re able to do for the local area,” he said.

The changes come as the Mercy works to overcome a small outbreak of the virus. Seven crew members have tested positive, and about 112 were taken off the ship and quarantined because they had contact with someone who tested positive.

There have been no new cases of the virus among the ship’s crew since Sunday, Rotruck said, adding that several staff have already been able to return to duty. He said officials have not determined how the virus got on board the ship, but noted that many of the staff came from around the region and could have been carrying the virus but not showing symptoms when they arrived.

Rotruck said the ship will remain in L.A. for as long as needed, and there are no plans right now to leave.