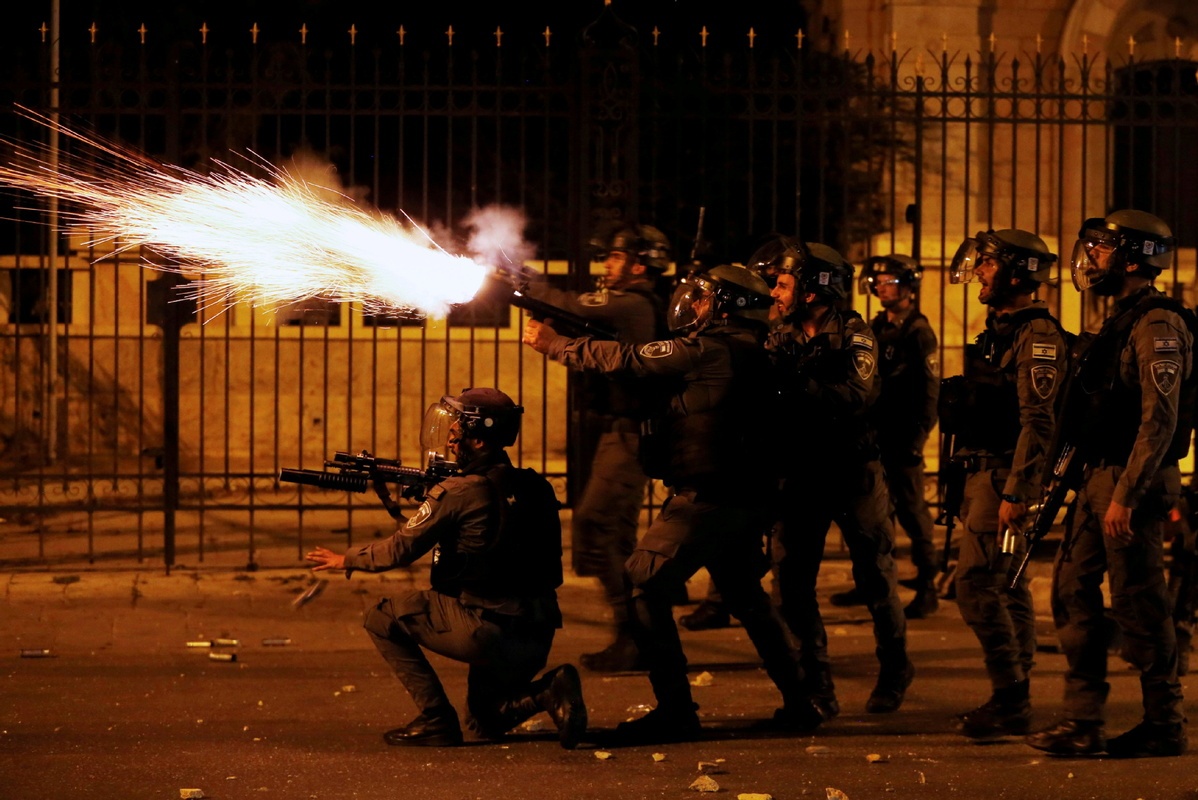 An Israeli border police member fires a weapon during an anti-Israel protest by Palestinians over tension in Jerusalem, in Bethlehem in the Israeli-occupied West Bank, May 10, 2021. (Photo: Agencies)

The US is on course to approve a $735 million arms sale to Israel amid a raging conflict in the Middle East, as a group of Democratic lawmakers launched a futile attempt on Wednesday to block the sale.

The situation in the region has prompted calls for leveraging Washington's annual $3.8 billion military aid as "a force for peace" in the Middle East.

As of Wednesday, the latest military conflict between Israel and Hamas has claimed more than 220 Palestinian lives, including many civilians and children, and killed at least 12 people in Israel.

Congress was notified by the Biden administration on May 5 of the commercial deal in which Boeing will provide the precision-guided weapons to Israel.

That notice came nearly a week before violence flared in the Gaza Strip, according to The Washington Post, which first broke the news about the deal on Monday.

Lawmakers have a 15-day review period, meaning that there were just two days left as of Wednesday if they want to halt the sale.

On Wednesday, a group of House Democrats, led by progressive Congresswoman Alexandra Ocasio-Cortez of New York, offered a resolution seeking to block the deal.

"For decades, the US has sold billions of dollars in weaponry to Israel without ever requiring them to respect basic Palestinian rights. In so doing, we have directly contributed to the death, displacement and disenfranchisement of millions," Ocasio-Cortez said in a statement announcing the resolution.

"At a time when so many, including President Biden, support a ceasefire, we should not be sending 'direct attack' weaponry to Prime Minister Netanyahu to prolong this violence," she said.

Chinese Foreign Ministry spokesperson Zhao Lijian, when asked on Tuesday to comment on the US arms deal, said, "Instead of actively preventing the Palestinian-Israeli conflict, the United States is prepared to add fuel to the fire."

The US said on Wednesday it opposed a France-drafted United Nations Security Council resolution calling for an end to the fighting.

The Israel ally has vetoed several prior statement drafts proposed by China, Norway and Tunisia.

The move by progressive Democrats represents just a "symbolic push", as it is unlikely to succeed, not likely to advance through the House or even the Foreign Affairs Committee, according to several US media reports.

Most Democrats have defended the arms sale even as they have pushed Israel to agree to a cease-fire. Senate Armed Services Chair Jack Reed, a Democrat, noted earlier this week that the Boeing kit is precision-guided and thus intended to reduce civilian casualties as well as collateral damage, politico.com reported on Wednesday.

Even Democrats who have been critical of Israel's strikes on Gaza, such as Senate Foreign Relations Committee Chairman Bob Menendez of New Jersey, said the weapons sale is a done deal and will not be unwound, thehill.com reported on Wednesday.

However, some progressives, including some in positions of power such as House Defense Appropriations Subcommittee Chairwoman Betty McCollum and Senate Budget Committee Chairman Bernie Sanders are now increasingly pushing to place more conditions on or to revisit the $3.8 billion in military aid the US sends to Israel annually, according to the report.

In April, McCollum proposed a bill that would bar US funding to Israel from being used to support "military detention, interrogation, abuse or ill-treatment" of Palestinian children, property seizures and forcible evictions in the occupied Palestinian territories or the deployment of personnel or equipment to annex territory in the West Bank, according to thehill.com report.

In an editorial on Wednesday, The Boston Globe said the US government gives Israel $3.8 billion in annual military aid without asking for protection of Palestinians' rights in return.

"This kind of unchecked use of US military financing has, in recent years, pushed Israel in the direction of abandoning the two-state solution," reads the newspaper, adding that the aid should make a two-state solution "more, not less, likely".

On Wednesday, While House Principal Deputy Press Secretary Karine Jean-Pierre did not answer a reporter's question about the weapons sale when she briefed the media about President Joe Biden's phone call with Israeli Prime Minister Benjamin Netanyahu early in the day, in which the US president said he expected "a significant de-escalation today on the path to a ceasefire".

But shortly after the call, Netanyahu pledged to continue pressing ahead with a military offensive in the Gaza Strip, saying that he was "determined to continue this operation until its aim is met".