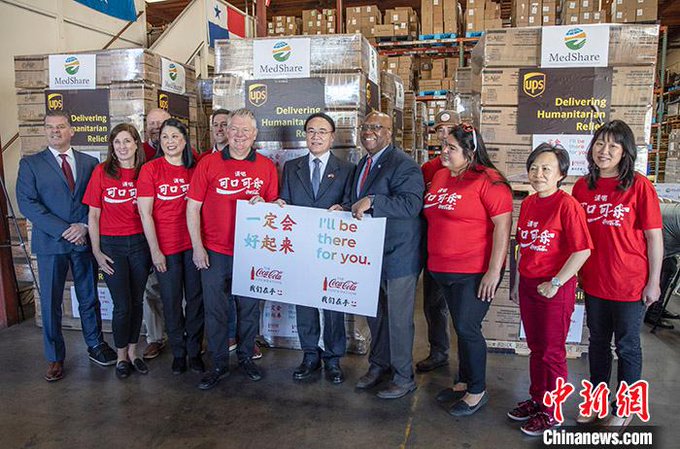 SAN FRANCISCO, Feb. 10 (Xinhua) -- U.S. non-profit Medshare announced on Monday a donation of 1.8 million respirators and 80,000 isolation gowns is to be sent to China to aid its ongoing fight against the novel coronavirus outbreak in the country.

Atlanta, Georgia-based Medshare hosted a special event at its warehouse in San Leandro, California, to unveil the donation of the medical supplies, which are urgently needed by hospitals and medical personnel in China.

Medshare, a humanitarian aid organization dedicated to global health, is partnering with the Coca-Cola Foundation, a philanthropic arm of the Coca-Cola company; Henry Schein, Inc., a leading global provider of healthcare products; and the U.S. UPS Foundation, to coordinate and launch the humanitarian relief efforts.

Medshare CEO and President Charles Redding, who lived in China for four years, said the coronavirus outbreak could have happened anywhere in the world.

"This is a global issue that can have a global impact," he said.

"We recognize that the Chinese people are doing all they can to help fight this disease, but we also recognize that they can't do it alone," Redding said. "It's gonna take a lot of great people coming together to help with this issue."

Redding hailed its partners for helping medical personnel who "are fighting on the frontlines to contain the coronavirus."

Chinese Consul General in San Francisco Wang Donghua described the donation by Medshare as helping to fulfill its mission of improving the quality of life of the people on the planet.

"Since the outbreak of the coronavirus, the Chinese government and people are making all their efforts to contain the spread of the virus," he said.

The Chinese government has been communicating and cooperating with other countries, including the United States, in an open, transparent and responsible manner, Wang noted.

He criticized a handful of people in the United States for making irresponsible remarks against China's efforts to fight the virus and for taking advantage of the outbreak to point fingers at China.

"The donation of the 1.8 million masks and 80,000 isolation gowns is a symbol of goodwill and friendship towards the Chinese people," Wang said.

"It also symbolizes the international solidarity and shared responsibility for the common goal of defeating the virus and protecting health and safety of the people around the world," he said.

The shipment of the relief supplies will arrive in the Chinese city of Shanghai on Feb. 14 and be distributed in both Shanghai and Hubei, the worst-hit province in the viral outbreak.

Medshare also shipped 800,000 masks to Hubei Province on Feb. 1, in response to the needs of Chinese hospitals and medical personnel who are working to treat patients and contain the virus.