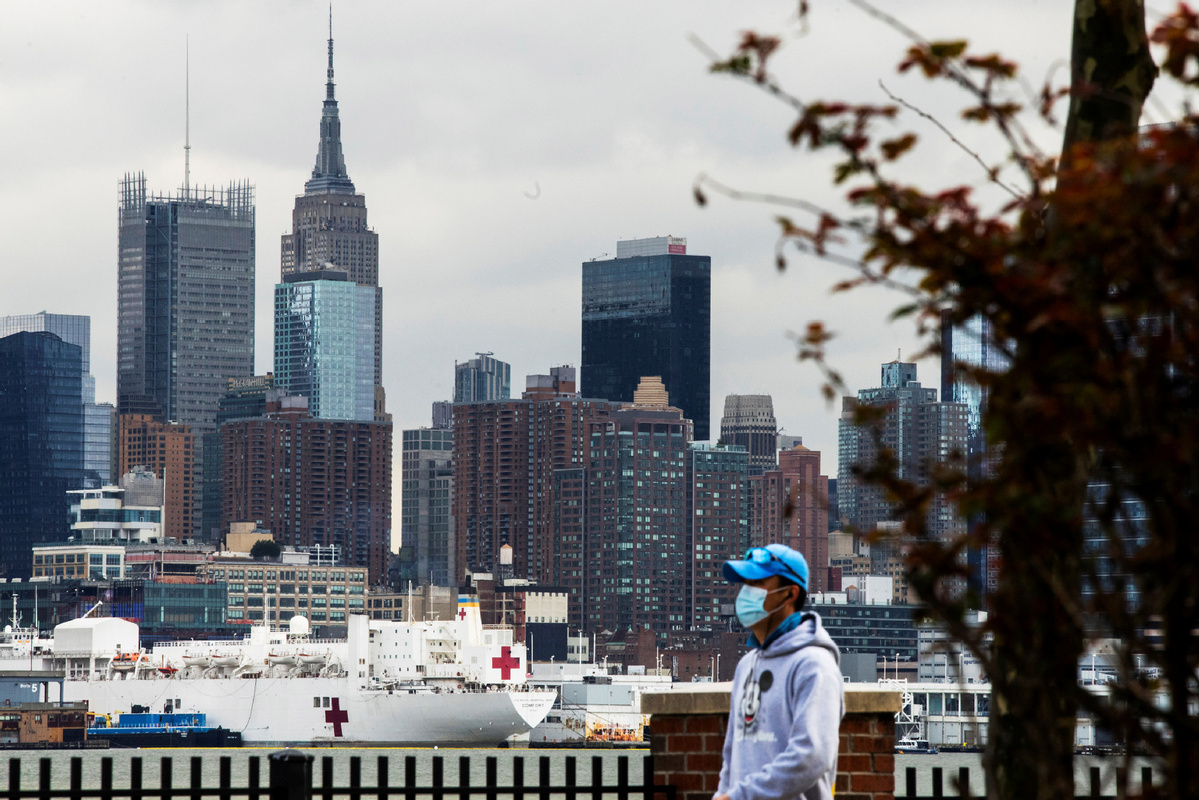 A man wears a face mask while the USNS Comfort and the Empire State Building are seen from Weehawken, New Jersey, during the outbreak of the coronavirus disease (COVID-19) in New York City, US, March 31, 2020. [Photo/Agencies]

NEW YORK - US officials and researchers have been urging people to follow social distancing guidelines as a total of 189,035 COVID-19 cases and 3,900 deaths were reported in the United States as of Tuesday night.

Nearly one third of the deaths occurred in the New York State, the epicenter of the outbreak in the country, according to Johns Hopkins University's Center for Systems Science and Engineering.

Health experts on the White House Coronavirus Task Force said Tuesday that even with the Trump administration's national social distancing guidelines in place, Americans still should be prepared for the prospect of the coronavirus causing 100,000 to 240,000 deaths in the country.

At a White House press briefing, Deborah Birx, the task force's response coordinator, said as many as 1.5 million to 2.2 million people will succumb to COVID-19 if no mitigation measures whatsoever are taken to contain the virus.

"There's no magic bullet, there's no magic vaccine or therapy. It's just behaviors," Birx said, urging people to act according to the administration's social distancing strategy, which has been extended to April 30. Those behaviors, Birx added, could change "the course of the viral pandemic."

During the briefing, US President Donald Trump warned: "we're going to go through a very tough two weeks."

A research team with Stanford University published a report on Monday saying that there might be a risk of a resurgence or second peak of the COVID-19 if restrictions including social distancing and quarantine are lifted too early.

To avoid this situation, people need to "apply multiple interventions over a long period of time -- 12 to 18 months or more -- until effective treatments and/or vaccines are widely available," said team leader Erin Mordecai in the report.

It doesn't mean a total lockdown for a year or more. Adaptive strategies that actively switch on and off interventions can allow for periods of greater mobility while still keeping the epidemic at levels the healthcare system can manage, according to the report.

Mordecai said that observing what's going on in China and South Korea will be very informative for the rest of the world, as the two countries are seeing declines in cases and returning to more social interaction.

The city has closed 10 playgrounds and removed hoops and rims in some 80 basketball courts to avoid crowding. New York State has banned public gatherings till April 15.

"If people do not follow the rules we will continue to shut them down aggressively," warned Mayor Bill de Blasio on Tuesday.

Local police have been patrolling the streets to disperse gatherings and those who do not practice social distancing could be fined between 250 and 500 US dollars, the mayor has said.