US opens new mass facility in Texas for migrant children 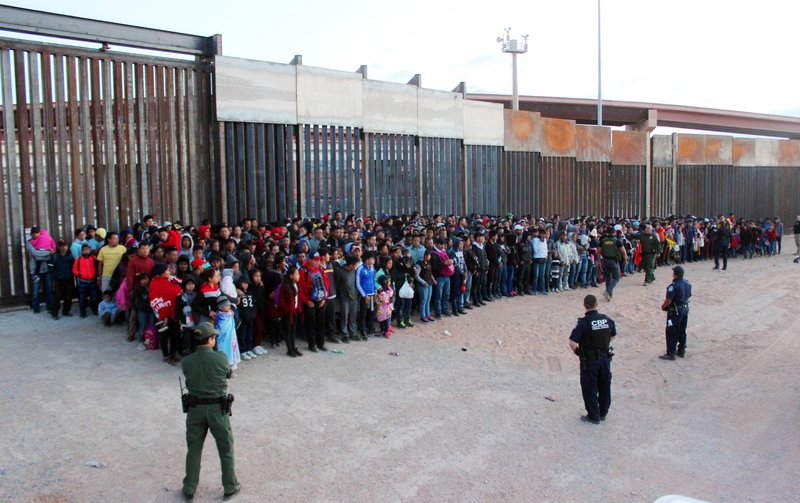 This May 29, 2019 file photo released by US Customs and Border Protection (CBP) shows some of 1,036 migrants who crossed the US-Mexico border in El Paso, Texas, the largest that the Border Patrol says it has ever encountered. (Photo: AP)

The federal government is opening a new mass facility to hold migrant children in Texas and considering detaining hundreds more youths on three military bases around the country, adding up to 3,000 new beds to the already overtaxed system.

The new emergency facility in Carrizo Springs, Texas, will hold as many as 1,600 teens in a complex that once housed oil field workers on government-leased land near the border, said Mark Weber, a spokesman for Office of Refugee Resettlement.

The agency is also weighing using Army and Air Force bases in Georgia, Montana and Oklahoma to house an additional 1,400 kids in the coming weeks, amid the influx of children traveling to the US alone. Most of the children crossed the border without their parents, escaping violence and corruption in Central America, and are held in government custody while authorities determine if they can be released to relatives or family friends.

All the new facilities will be considered temporary emergency shelters, so they won’t be subject to state child welfare licensing requirements, Weber said. In January, the government shut down an unlicensed detention camp in the Texas desert under political pressure, and another unlicensed facility called Homestead remains in operation in the Miami suburbs.

“It is our legal requirement to take care of these children so that they are not in Border Patrol facilities,” Weber said. “They will have the services that ORR always provides, which is food, shelter and water.”

Under fire for the death of two children who went through the agency’s network of shelters and facing lawsuits over the treatment of teens in its care, the agency says it must set up new facilities to accommodate new arrivals or risk running out of beds.

The announcement of the program’s expansion follows the government’s decision to scale back or cut paying for recreation, English-language courses and legal services for the more than 13,200 migrant toddlers, school-age children and teens in its custody.

The Health and Human Services department, which oversees the refugee office, notified shelters around the country last week that it was not going to reimburse them for teachers’ pay, legal services or recreational equipment, saying budget cuts were needed as record numbers of unaccompanied children arrive at the border, largely from Guatemala, Honduras and El Salvador. In May, border agents apprehended 11,507 children traveling alone.

Attorneys said the move violates a legal settlement known as the Flores agreement that requires the government to provide education and recreational activities to migrant children in its care. Last week, attorneys filed a motion claiming that the government also was violating the decades-old settlement by keeping kids at Homestead for months in some cases, instead of releasing them within 20 days.

“If they are going to open the program up in these numbers and they can’t even manage the influx facility that they have in a humane way, then compounding that is going to be disastrous,” said Holly Cooper, an attorney at the Immigration Law Clinic at University of California, Davis who represents detained youth.

Advocates have slammed the move as punitive, saying such services are typically available to adult prisoners.

“ORR’s cancelling of these services will inflict further harm on children, many of whom continue to languish for months without being placed safely and expeditiously into a sponsor’s care. That is not only unacceptable, it could be in violation of the law,” said Rep. Rosa DeLauro, a Connecticut Democrat who chairs the House Appropriations subcommittee with oversight on the agency’s budget.