WORLD US Parents struggle as schools reopen amid coronavirus surge

US Parents struggle as schools reopen amid coronavirus surge

Putting your child on the bus for the first day of school is always a leap of faith for a parent. Now, on top of the usual worries about youngsters adjusting to new teachers and classmates, there’s COVID-19. 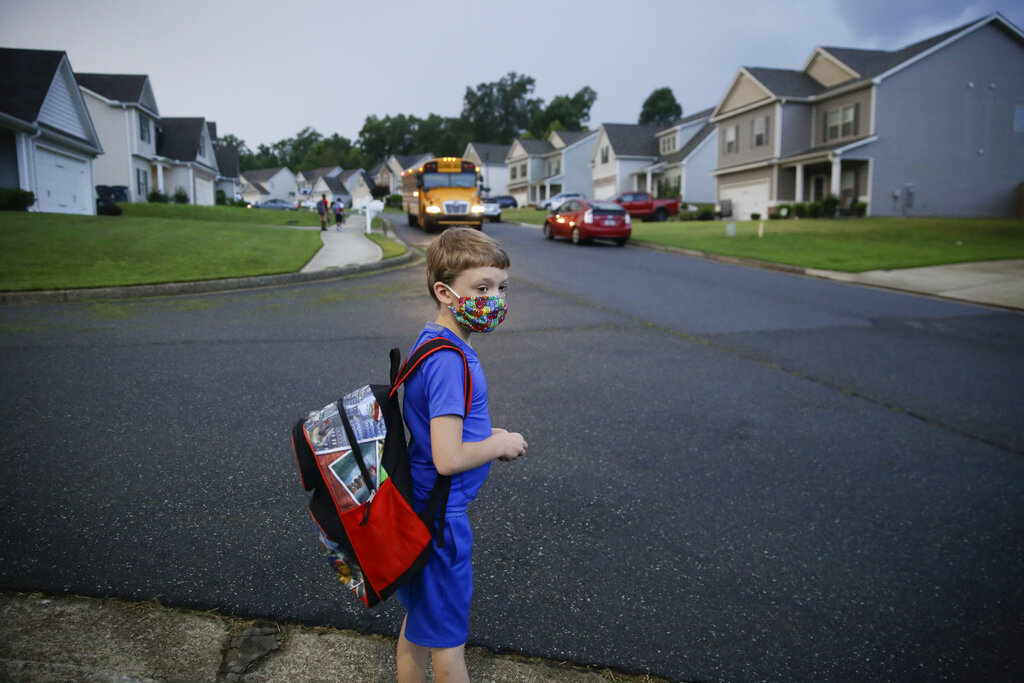 Rachel Adamus was feeling those emotions Monday morning as she got 7-year-old Paul ready for his first day of second grade and prepared 5-year-old Neva for the start of kindergarten.

With a new school year beginning this week in some states, Adamus struggled to balance her fears with her belief that her children need the socialization and instruction that school provides, even as the U.S. death toll from the coronavirus has hit about 155,000 and cases are rising in numerous places.

As the bus pulled away from the curb in Adamus' Dallas, Georgia, neighborhood, the tears finally began to fall.

“We have kept them protected for so long,” said Adamus, who said her aunt died from COVID-19 in Alabama and her husband’s great uncle succumbed to the virus in a New Jersey nursing home. "They haven’t been to restaurants. We only go to parks if no one else is there. We don’t take them to the grocery store. And now they’re going to be in the classroom with however many kids for an entire day with a teacher.”

The Adamus children are among tens of thousands of students across the nation who were set to resume in-person school Monday for the first time since March. Parents in Louisiana, Mississippi and Tennessee will also be among those navigating the new academic year this week.

Many schools that are resuming in-person instruction are also giving parents a stay-at-home virtual option; Adamus, like many other parents, decided against that. Other schools are planning a hybrid approach, with youngsters alternating between in-person classes and online learning.

But an uptick in COVID-19 cases in many states has prompted districts to scrap in-person classes at least for the start of the school year, including Los Angeles, Philadelphia and Washington.

President Donald Trump and Education Secretary Betsy DeVos have urged schools to reopen. However, Dr. Anthony Fauci, the nation’s top infectious-disease expert, warned Monday: “There may be some areas where the level of virus is so high that it would not be prudent to bring the children back to school.”

“So you can’t make one statement about bringing children back to school in this country. It depends on where you are,” he said.

In Georgia's Paulding County, both of Adamus' children wore masks, though that is not mandatory for the 30,000 students in the county, about 25 miles northwest of Atlanta. Adamus said her son and daughter understand what’s happening at a basic level — that there are germs and they need to stay home.

“My daughter’s been saying a lot lately, `I can’t wait for the germs to go away,’” she said.

Adamus lives near North Paulding High School, where the principal sent a letter over the weekend announcing a football player tested positive for the virus after attending practice. The Georgia High School Association, in a memo last week, said it has received reports of 655 positive tests since workouts for football and other sports started on June 8.

In Mississippi, where the virus is spreading fast, Emily Thompson’s son started the sixth grade at Newton County Middle/High School in Decatur. Thompson, a pharmacist, said she felt relief watching him get in line to have his temperature taken before entering the building.

She and her husband, who also works in health care, found it was a “nightmare” trying to keep the boy and their two other elementary school-age children on track with their studies. She said she is not overly worried about her children getting sick at school.

“It would be more detrimental not to send them, in my opinion, than for them to hang out and do the virtual learning,” she said. “I think they’re going to get more interaction at school. They are going to learn more at school. They just need to be in that setting.”

In Indiana, where schools reopened last week, a student at Greenfield-Central Junior High tested positive on the first day back to class and was isolated in the school clinic.

“This really does not change our plans,” School Superintendent Harold Olin said. “We knew that we would have a positive case at some point in the fall. We simply did not think it would happen on Day One.”

One student who wasn't starting at North Paulding on Monday was Aliyah Williams. Her mother, Erica Williams, said she is keeping the 14-year-old freshman home because two of her younger sons have cystic fibrosis and she can’t risk their being exposed. Williams said she thinks her daughter will be OK academically with online classes, which up to 30% of the district's students have enrolled in. But she is worried about Aliyah’s inability to see her friends.

“She’s a social butterfly. That’s a big part of her personality," Williams said.

Aliyah has been participating in color guard with the school band, but Williams said she is now “conflicted” about that too, considering the football player’s positive test.

Thames said that no one at her house is high-risk and that as a former teacher, she thinks her children will learn more from teachers than they did from her in the spring.

“They’re going to actually listen to their teacher, as opposed to me. When it’s time to do sight words, it was a fight every day,” Thames said. “I absolutely trust our administration and our teachers to do what it takes to keep them safe and keep themselves safe.”

Many teachers are uneasy, dismayed that the Paulding district refused to mandate masks or push back the start date for in-person classes, as other Atlanta-area districts have done. But with Georgia’s weak unions, there has been little organized opposition.

“I desperately want to return to face-to-face teaching, but not until it is safe,” Steven Hanft, a North Paulding High teacher, told the county school board last month.

Other parents have to balance their job with schooling decisions. Shannon Dunn has to report to her job this week as a cafeteria manager at an elementary school in Baton Rouge, Louisiana, but she has no idea what she will do when her daughter starts kindergarten with online-only instruction.

“My family works. I have no one I can take her to and say, `OK, at 12 o’clock you are going to have to start working online with her for school,’” Dunn said.

School officials have said they hope to begin in-person classes after Labor Day. But Dunn said that will not ease her mind completely.

“If I hear of the spread of COVID at the school, then I'd have to rethink it all over again,” she said.

Elsewhere around the world, schools remained closed across much of Europe, which is still in its summer vacation season. But schools in Germany's Mecklenburg-Western Pomerania state became the first in the country to reopen since March. Students were split into groups to help contain any outbreak, and some of the schools imposed mask rules.