WORLD US passports to list 'Israel' for birth in Jerusalem

US passports to list 'Israel' for birth in Jerusalem

The United States said Thursday that its citizens born in Jerusalem will be able to list Israel as their place of birth, after President Donald Trump recognized the contested holy city as the Jewish state's capital. 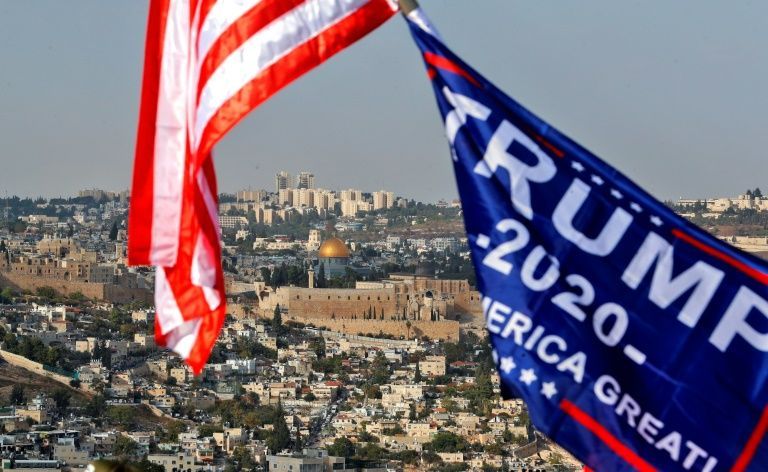 US and Trump campaign flags fly in Jerusalem before the Dome of the Rock within the Aqsa mosque, or Temple Mount, a complex holy to both Muslims and Jews. (Photo: AFP)

Until now, Americans born in the city had simply "Jerusalem" listed in their passports without specifying the country.

Effectively immediately, Jerusalem-born Americans can elect to state Israel but otherwise their passports would still say only Jerusalem -- an option sure to be preferred by many from the city's predominantly Palestinian eastern part.

The announcement comes days before the presidential election in which Trump has promoted his steadfast support of Israel, a key cause for his evangelical Christian base.

In his first year in office, Trump recognized Jerusalem as Israel's capital and later moved the US embassy there -- putting the United States at odds with virtually every other country.

"The United States recognizes Jerusalem as the capital of Israel and its seat of government but continues to take no position on the boundaries of Israeli sovereignty in Jerusalem," Secretary of State Mike Pompeo said as he announced the passport changes.

"This matter remains subject to final status negotiations between the two parties."

The Palestinian leadership has refused to accept diplomacy by the Trump administration, calling it biased toward Israel.

Since September, the Trump administration has secured breakthroughs as the United Arab Emirates, Bahrain and Sudan agreed to recognize Israel despite the lack of a peace deal with the Palestinians.

Under a plan proposed earlier this year by Trump, the Palestinians would enjoy a limited, demilitarized state with a capital on the outskirts of Jerusalem, which would remain under full Israeli sovereignty.