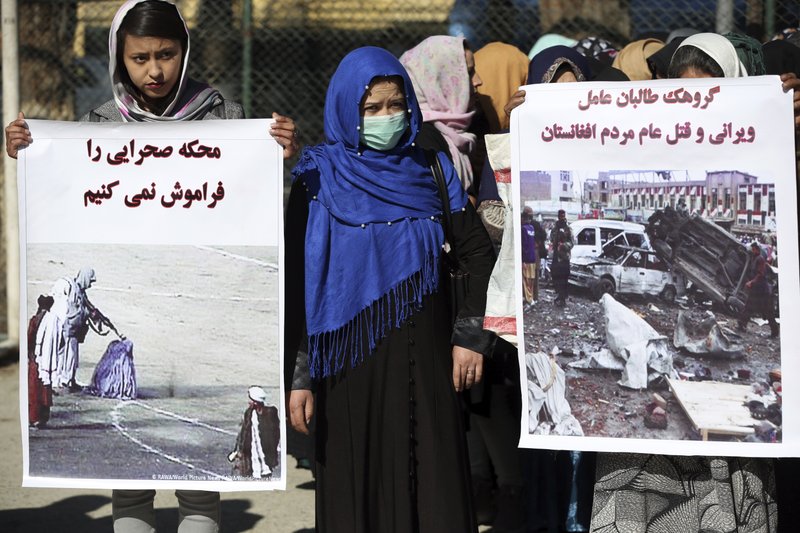 In this Monday, March 2, 2020, photo, Afghan civil society activists hold banners in Dari that read: "We cannot forget the court-martials, and Taliban group are the factor of destruction and genocide" as they chant slogans against US agreement with the Taliban, during a protest in Kabul, Afghanistan. (Photo: AP)

Now that the US has signed a deal with the Taliban to eventually leave Afghanistan, it will soon be up to Afghans on both sides of the conflict to decide what peace will look like.

The stakes are high.

The big question for many — and particularly those who remember the religiously repressive Taliban rule that ended with the US invasion in 2001 — is whether the newly emboldened militants have changed their ideology. Women, especially in the cities, worry that their rights will be bargained away.

The Taliban say they have changed. Girls will be allowed to go to school, and women to work. Women can be judges but not the chief justice; they can participate in politics but not be president, they say.

The Taliban, however, will likely not back down on segregation of the sexes, said Hakim Mujahed, the Taliban’s representative at the United Nations during their five-year rule. They will not accept co-education nor will they accept women and men working together, he said.

They also say hijab, or a head covering, will be a must, though they won’t insist on the all-enveloping burqa, according to Mujahed. The burqa predated the Taliban by decades, particularly in rural Afghanistan, but became a symbol of their repression of women during their rule. It is still worn in much of rural Afghanistan and is seen even in the capital of Kabul.

“But they are in favor of providing the conditions for education, for work, for economic and political activities for women ... but within the framework of Islamic teachings,” said Mujahed who kept his long unkempt beard and wears the turban. Though the turban is common throughout Afghanistan __ not just in Taliban areas — they made it a signature of their rule, requiring all government employees wear one. They also demanded all men wear beards.

In any negotiations, the two sides are expected to hammer out the form of government and constitution. The current constitution decrees that no laws may contradict Islamic principles — and trying to define that vague term is where issues of women’s rights and broader civil rights are likely to come to the fore.

Activists want negotiators to write in guarantees up front that provisions on Islamic principles can’t be used to later violate those rights.

Najiba Ayubi, who is director of an organization devoted to women and media development and a strong proponent of free speech, said Afghan women can’t rely on Afghan men to fight for their rights. She said women need strong female representation at the table.

“Otherwise, no men will fight with or for us ... because they are not aware what we are facing, and maybe for some of them it is not important what will happen to women,” she said.

Afghanistan is a conservative and “male-dominated, and men always think women are second-class citizens,” Ayubi said, adding it will take years to change.

Ayubi has good reason to fear the Taliban. When they ruled, she was twice beaten for being improperly covered, even as she walked hidden behind the all encompassing burqa. Her sisters — one a doctor and the other a judge — were forced to stay home.

“The Taliban know that this is another time. This is not the Afghanistan of 20 years back,” she said.

Today, the country has a thriving social media scene and several media outlets and a data-savvy younger generation that cannot be easily silenced. The Taliban too have a younger generation, who will not be denied their music and their videos, which were banned during their rule.

Still, getting Afghans to agree won’t be easy.

Even getting them to the table is proving a formidable task. The deal between the US and Taliban envisioned talks between Afghans on both sides of the conflict starting March 10, most likely in Oslo. But so far there’s no confirmation that important next step will take place.

Washington won’t likely wait around. Its withdrawal is not tied to Afghanistan’s warring sides figuring out how to talk to each other, let alone coming to an agreement on what peace among them will look like.

According to Saturday’s deal, all 13,000 US troops will leave Afghanistan within 14 months if the Taliban meet their obligations to America. Those promises are tied to fighting terrorism, preventing Afghanistan from becoming a safe haven for terrorists, denouncing terrorist groups, severing past links with the likes of al-Qaida and helping fight the Islamic State group affiliate.

The releases are intended as a good will gesture.

Rehmatullah Nabil, a former head of Afghanistan’s spy agency and a candidate in the disputed presidential polls held last September, says there’s a lot to do before Afghans from Kabul are ready to sit across the table from the Taliban, and he said the talks should be postponed.

Ghani has yet to unite the country’s squabbling politicians under a single banner. Nabil said a unified front is needed to craft an Afghanistan that respects traditions while embracing the young generation, that understands the countryside while encouraging the urban development.

“Imposing (conditions) from outside . . . has divided us __ between urban and rural, between the traditional and new Afghanistan,” he said. “This is important to to this time to listen to each other, to come up with our own solution.”